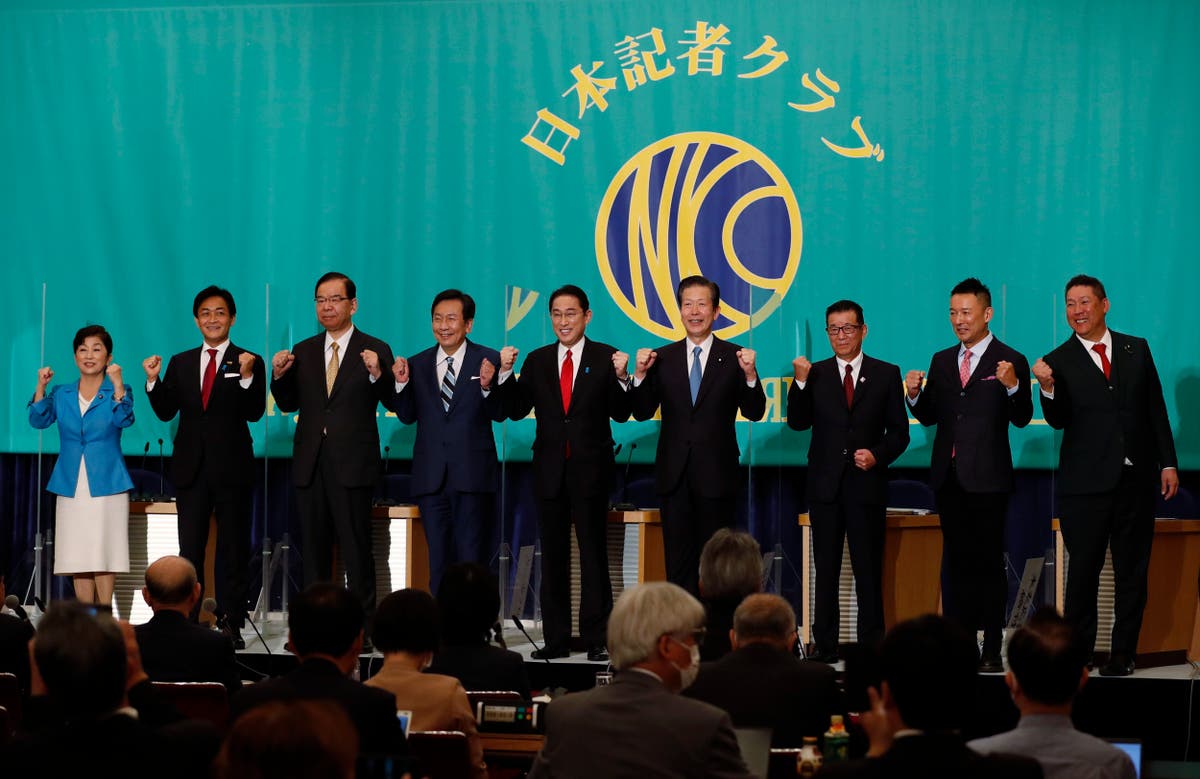 Prime Minister Fumio Kishida called for increases in Japan s military capability and spending in response to what he described as growing threats from China and North Korea in a public debate with eight other political party leaders ahead of upcoming national elections.

The party leaders also discussed ways to mend the pandemic-hit economy and respond to any future waves of the coronavirus — issues expected to feature prominently in the Oct. 31 elections.

As head of the governing Liberal Democratic Party, Kishida was selected prime minister earlier this month and called the election for the 465-seat lower house, the more powerful of Japan’s two-chamber Diet, or parliament. He said he is seeking a public mandate for his leadership and policies.

Kishida said Japan’s security environment has been rapidly changing. He noted that North Korea likely possesses several hundred missiles capable of reaching Japan, and said Japan should consider acquiring the ability to strike back at an enemy base as a deterrence option allowable under international law.

Pre-emptive strike and strike-back options are controversial and critics say they go beyond Japan’s war-renouncing Constitution, which strictly limits the use of force to self-defense.

“We have to prepare for realistic possibilities to protect our people and discuss a wide range of options,” he said.

Matsuno called it a “new threat” that conventional equipment have difficulty dealing with. He said Japan will step up its detection, tracking and shooting-down capability of “any aerial threat.”

Kishida, who earlier was considered a dovish moderate, has become increasingly hawkish, apparently to gain support within his party, which is controlled by right-wing heavyweights including former Prime Minister Shinzo Abe

Kishida did not explain how he would gain support from his coalition partner, the pacifist Komeito party, whose leader, Natsuo Yamaguchi, recently questioned the governing party’s plan to possibly double the defense budget cap to 2%.

Yamaguchi has said the public would not approve of a sharp defense budget increase when money should be spent on economic stimulus and social welfare in a country with a fast-aging and declining population.

Edano also called for a narrowing of the gap between the rich and poor by promoting more distribution and creating “a society where people support each other.”

He called for a quota system in future elections to promote gender equality in politics. Women currently account for only about 10% of the lawmakers in parliament.

His party has formed an united front with three other opposition parties to cooperate on 20 campaign policies, including seeking a more inclusive society.

Mizuho Fukushima, head of the Social Democratic Party of Japan, which is among the groups cooperating with Edano’s party, was the only woman in the debate. A lawyer active in human rights issues, Fukushima said she will promote gender equality, sexual diversity and a society without nuclear energy.

Asked if they support legislation guaranteeing equality for sexual minorities and allowing separate surnames for married couples, all except Kishida said yes.