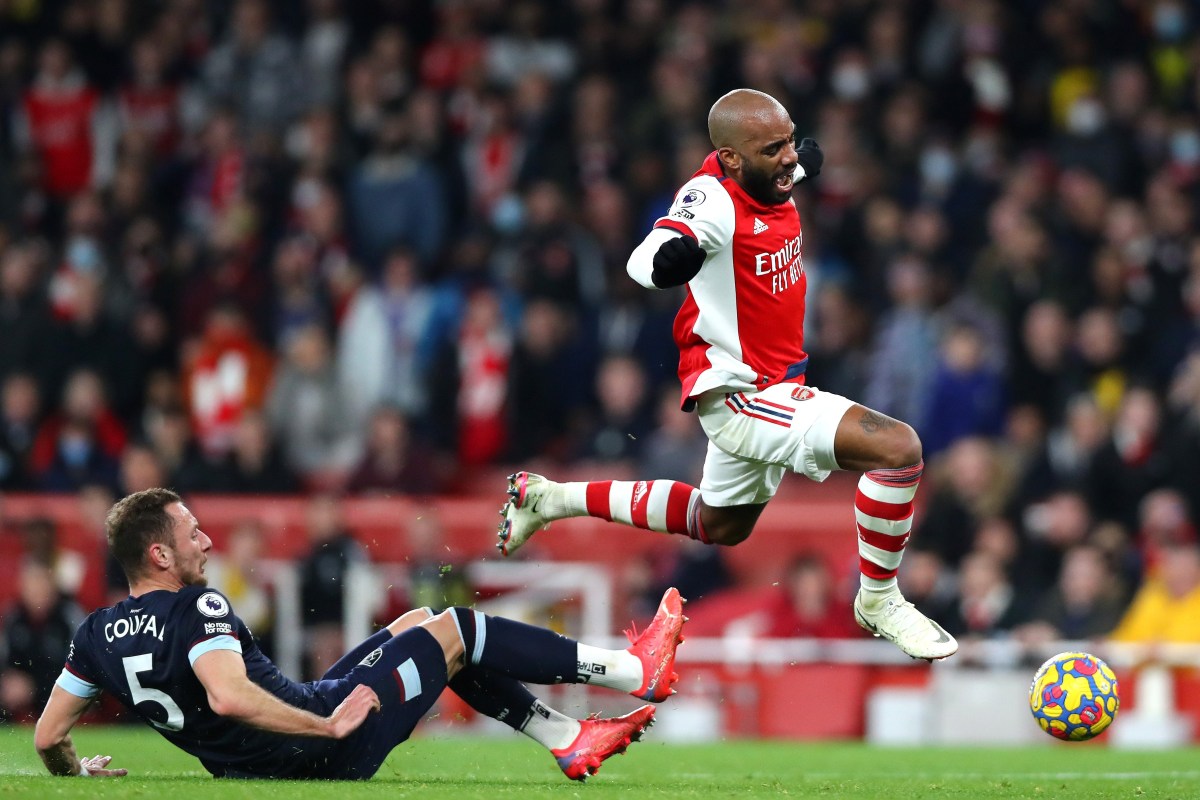 Jason Cundy has faced the wrath of his fellow talkSPORT hosts by defending Anthony Taylor’s decision to give a penalty and second yellow card to Vladimir Coufal in Arsenal’s 2-0 win over West Ham.

The Gunners ended up with an imprssive victory on the night thanks to goals from Gabriel Martinelli and Emile Smith Rowe, which saw them leapfrog the Hammers into fourth place in the Premier League table.

Pierre-Emerick Aubameyang had been stripped of the Arsenal captaincy by manager Mikel Arteta following multiple disciplinary breaches and Alexandre Lacazette took the armband against West Ham.

The Frenchman put in a decent all-round display to lead his side to victory, but a huge moment of controversy came when he was taken down in the West Ham box by Coufal with just over 20 minutes to play.

Taylor awarded a penalty with the Gunners already 1-0 up, and gave Coufal a second yellow card, without checking his pitchside monitor.

talkSPORT commentator and former Hammers striker Dean Ashton complimented the tackle at first glance, and was left shocked when Taylor refused to change his decision.

Lacazette stepped up to miss the resulting penalty, but Arsenal later made their man advantage pay when Smith Rowe put the game to bed.

Cundy initially missed the incident, but was left amazed when he finally cast his eye on the supposedly controversial call.

“And then I see it, I was listening to Dean Ashton, I thought I was going to see one of the worst decisions I’ve ever seen in my life, I’m sorry but he does not get enough of the ball.”

Fellow Sports Bar host Dean Saunders left Cundy all alone in his assessment though, comparing it to the questionable decision making in the Formula One season finale.

“That decision is up there with Michael Masi, Formula One,” Saunders said. “That is the worst decision, I just can’t believe you can give a penalty for that.”

“Well don’t take the man out in the box, I’m sorry he gets more man than he does ball,” Cundy replied.

During the game live on talkSPORT, Ashton maintained Coufal’s tackle was one to be admired, not punished.

“Well my initial thoughts were what a fantastic challenge that was from Coufal,” Ashton said. “And it was! I mean he does get the ball, yes he gets a bit of Lacazette.

“It’s a great challenge, there’s absolutely no way that is a penalty or a sending off.

“It’s funny that how one minute [Lacazette is] writing in agony, smacking his fist against the floor, and the next minute he’s got himself up and he can take the penalty.

“It was a great challenge from Coufal, and that clearly nowadays is not allowed in the Premier League, a tackle where you get some of the ball and part of the attacker, that is a shame to say that.”

Cundy wasn’t only left high and dry by colleagues Saunders and Ashton, but also Adrian Durham and Jamie O’Hara who were also clearly shocked by the referee’s call.

“Did he ever have one Ade?” O’Hara replied.