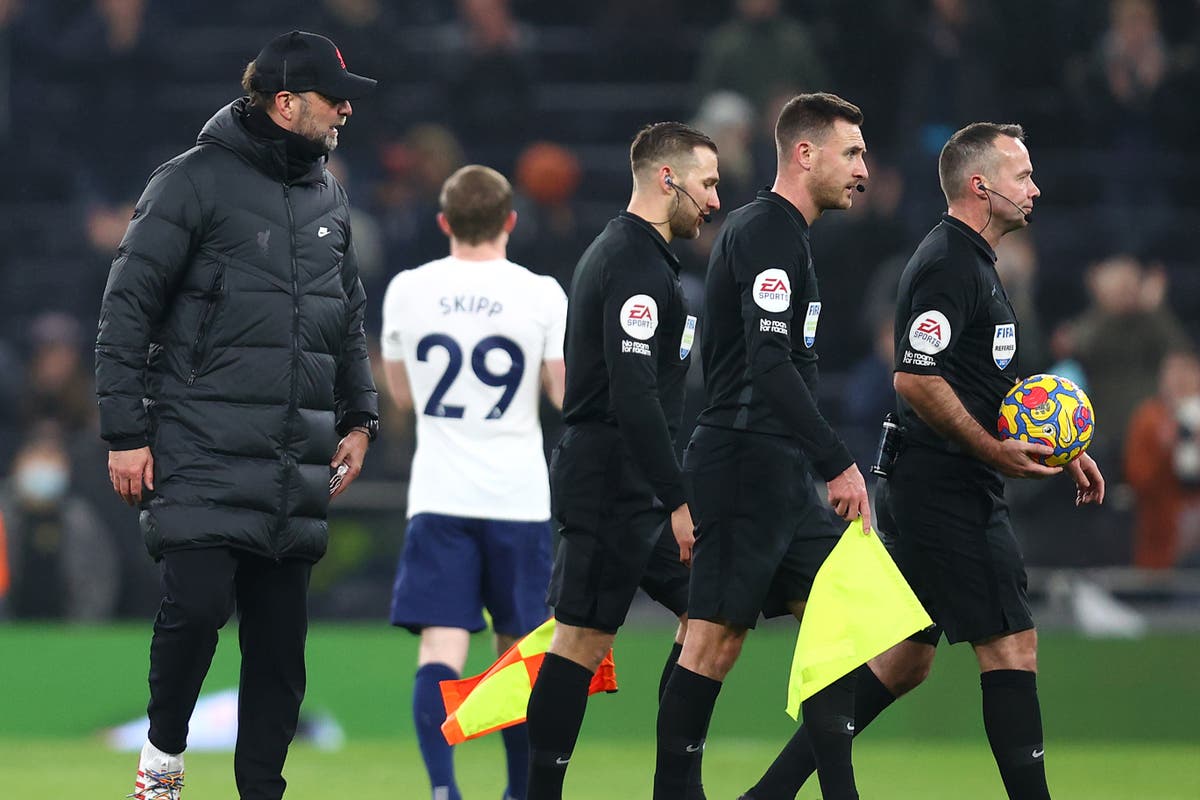 Klopp confronted the official on the pitch after Sunday’s memorable top-flight thriller in north London, with TV footage picking up the German saying: “I have no problems with any referees. Only you,” as he appeared to lament his lack of playing experience when it came to key decisions.

Klopp was particularly unhappy with the apparent inconsistency shown by Tierney in sending off Liverpool full-back Andy Robertson for kicking through Emerson Royal in the second half but earlier showing only a yellow card to Harry Kane for a wild tackle on Robertson.

Klopp was also incensed at Tierney’s explanation behind the decision not to award Diogo Jota a first-half penalty following an ill-advised challenge from Emerson, while he was also shown a yellow card by Tierney for his protestations on the touchline.

“Yes, definitely [Kane should have been shown a red card],” Klopp told Sky Sports. “We can give Robbo a red card, it’s not the smartest challenge of his life, that’s how it is. But that’s [Kane on Robertson] definitely a red card, no doubt about that.

“People will say his leg is in the air, but that’s pure coincidence. Harry cannot judge that and if Robbo’s leg is on the ground, then it’s a broken leg, no doubt about that.”

On the Jota penalty claim, an irate Klopp added: “Mr Tierney told me he thinks Diogo stops on purpose because he wants the foul. First and foremost if you want to shoot you have to stop because he cannot run and shoot in the same moment.

“It will always be helpful if people have played football themselves in the past.

“It’s fine, the draw is okay. We are not that crazy that we think we can’t draw at Tottenham. But these situations are crucial, they are decisive.”

He added: “I really have no idea what his [Tierney] problem is with me. Honestly, I have no idea.

“You just need an objective ref who sees the situations and trust them. He told me that he thinks he [Jota] stops on purpose. That’s incredible.

“He had the best spot on the pitch, he was eight yards away and doesn’t give it. We have to ask him, what’s his problem.”