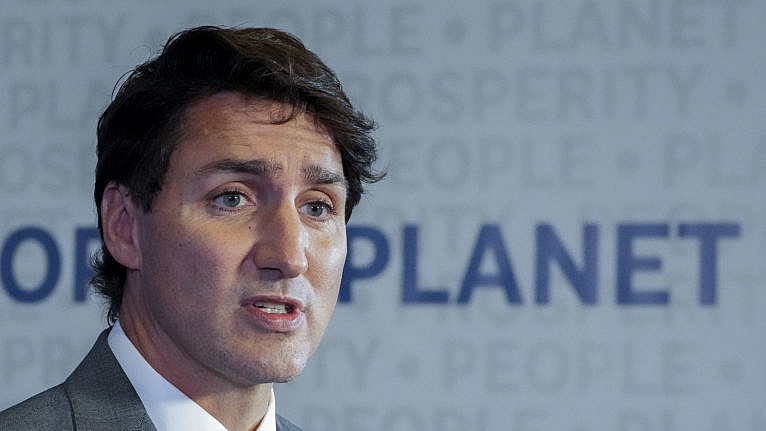 Justin Trudeau said Sunday that Canada wanted a stronger climate deal than what leaders agreed at the G20 summit in Rome, CP’s Mia Rabson reports: “There’s no question that Canada and a number of other countries would have liked stronger language and stronger commitments on the fight against climate change than others,” Trudeau said at his closing news conference. “But we did make significant progress on recognizing 1.5 degrees is the ambition we need to share.”

His remarks came as he wrapped up two days in Rome at the G20 leaders’ summit, where the leaders’ final communique saw them agree for the first time in writing that limiting global warming to 1.5 C would be better for everyone. But the document also watered down numerous parts of a previous draft version, including replacing specific deadlines to hit net zero carbon emissions by 2050 and eliminate coal power by the end of the 2030s, with net zero by “mid century” and eliminating coal power “as soon as possible.”

Chinese President Xi Jinping and Russian President Vladimir Putin skipped the event. They will also skip the UN COP26 climate talks, where Trudeau and most G20 leaders are headed next.

A draft of the G20′s 17-page final communiqué seen by The Globe and Mail largely reflects the wording and pledges of previous G20 summits and the 2015 Paris climate agreement itself. The upshot is that the Glasgow summit, known as COP26, which opened on Sunday, will come under even more pressure to find its own solutions.

Don’t blame China: Heather Scoffield, who is in Rome for the Toronto Star, notes the absence of Xi Jinping, who ought to have been seated next to Trudeau, but writes that Canada should lead by example instead of blaming China.

When asked why the negotiations towards a concrete path to net zero were so difficult, Deputy Prime Minister Chrystia Freeland didn’t point fingers on Saturday. Instead, she said it’s important to recognize that some countries carry greater costs for ambitious action.

Meanwhile, in Ottawa: Your correspondent has a story in Maclean’s about an idea being kicked around in back rooms of Ottawa that could see the NDP and Liberals agree to a three-year deal to avoid the government falling on confidence votes. Trudeau and Singh held a secret meeting recently but neither side would say that they talked about the idea.

The idea is not to establish a coalition—with NDP ministers in cabinet—but a deal like the one reached in Ontario in 1985, when then-NDP-leader Bob Rae agreed to vote with Liberals under David Peterson while they worked on an agreed-on agenda for two years. Some people in both parties say such a deal—this one for three years—could remove the regular pressure of confidence votes and allow the parties to work on shared priorities.

There is likely, though, to be pressure within both parties to reject such an arrangement, which would pose political risks for both sides. One complicating issue is the Liberals’ decision, which they announced late Friday, that they intend to appeal a Canadian Human Rights Tribunal order to compensate Indigenous children who were mistreated by the child welfare system, but also to suspend litigation and try to negotiate a resolution. The political fallout from that announcement, which is happening as I write, could have an impact on the possibility of a supply deal between the two parties. A senior NDP source, speaking before that decision was released, said the NDP was pushing for the Liberals to let the decision stand. A senior Liberal source confirmed that Singh and Trudeau discussed it at their meeting, and that Singh was pressing for a resolution.

Not in the loop: In the Star, Althia Raj has a column about the bruised feelings of Liberal backbenchers, who have not had the chance to meet since the election.

In 2015, Trudeau met with his caucus on Nov. 5 — two and a half weeks after the election. But in 2019, he waited seven weeks to hold a formal meeting. Reached Friday, before MPs were told, in the evening, of their next get together, many backbenchers said they had no idea why it was taking so long. They used terms such as “concerning” and “self-interested” to describe the wait.

“It’s sort of like, do we know why the election was called?” one MP joked. His suggestion was that “the prime minister doesn’t want it.” “I don’t think Trudeau wants to face the music any time soon, and if he can put it off until people get less antsy, then it works for him,” the Liberal said.

Whip speaks: CBC has a profile of Steven MacKinnon, the new Liberal whip, who faces the task of soothing the hurt feelings on the Liberal backbench, or at least wrangling them for votes. He is committed to finding avenues for their expression: “I view the role as creating enough space for all of the members of Parliament in the Liberal caucus to make sure that their priorities, their passions, their ambitions are all able to find expression within our group.”

Advice from Mulroney: Brian Mulroney told CTV Sunday that Erin O’Toole should eject any MPs who don’t want to get jabbed. “Of course. That’s leadership. Who am I to argue with tens of thousands of brilliant scientists and doctors who urge the population desperately to get vaccinated? And we’re going to have some members of my caucus, for example, who are going to say ‘I’m not going to do it’? They have to do it.”

Enough plexiglass: In Maclean’s, Justin Ling has an interesting piece on official failure to act on changing scientific knowledge about how COVID-19 is actually transmitted, which means we are wasting time with measures that are not helpful.

There is overwhelming evidence that airborne transmission is the dominant cause for COVID-19 outbreaks. We still don’t know how often people get sick from touching their eyes: All we know is that it is orders of magnitude less likely than contracting it through the air. Putting both explanations side-by-side gives the completely incorrect perception that they are equally likely. But look through the Public Health Agency of Canada’s advice for Canadians to beat the virus, and it’s totally divorced from that reality. The guidance recommends that “high-touch surfaces and objects such as toilets, bedside tables, light switches, door handles, and children’s toys should be first cleaned (to physically remove dirt) and then disinfected frequently.” Which is about as an effective use of your time as nailing a horseshoe over your door frame.

A gesture: RoseAnne Archibald, national chief of the Assembly of First Nations, told CP Saturday that there needs to be another symbolic gesture made before the flags go back up across Canada: “You cannot just raise the flags and replace it with nothing.”

Flags have been flying at half-mast since late May, when Trudeau ordered them lowered to mark the discovery of unmarked graves at the site of a residential school near Kamloops. The Royal Canadian Legion says it plans to raise the flag at Ottawa’s National War Memorial on Nov. 11.