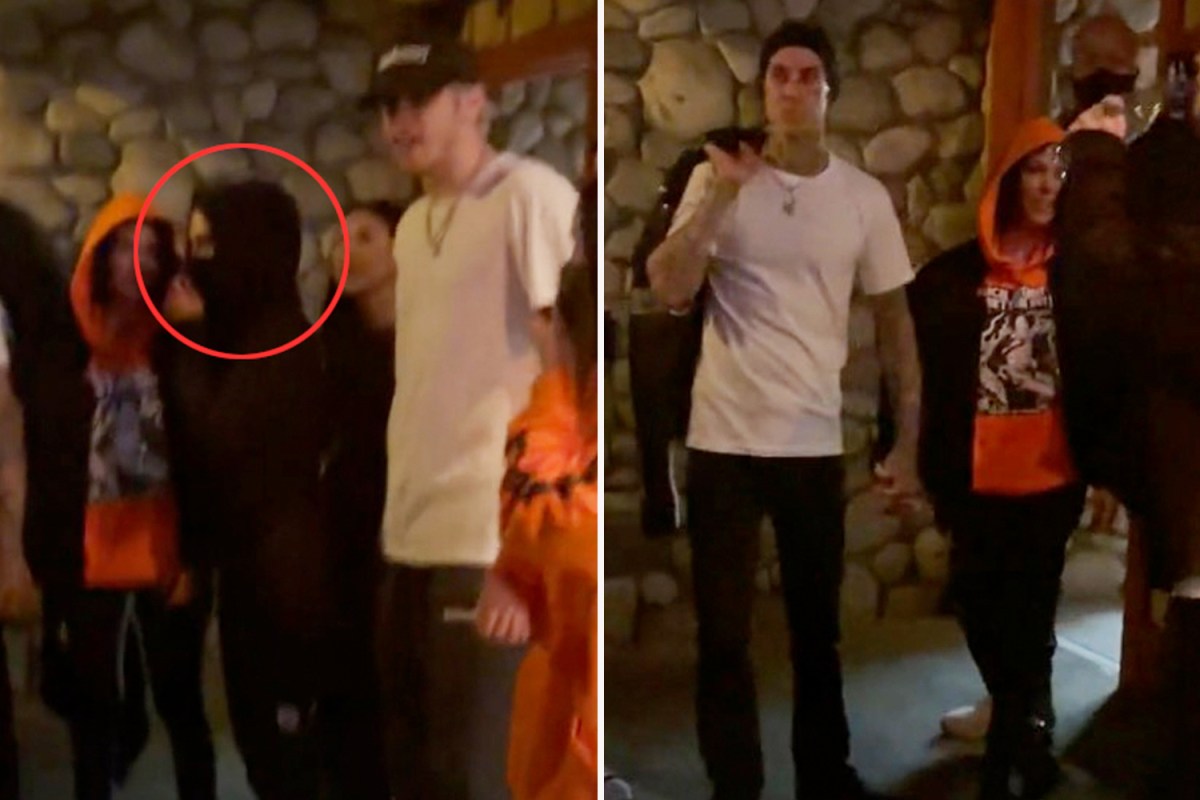 KIM Kardashian and Pete Davidson were “spotted holding hands” during their trip to Knotts Scary Farm with her sister Kourtney Kardashian and her fiancé Travis Barker.

In the short clip, The Bink-182 drummer led the group across with his partner behind him.

Kourtney had on an orange hoodie while Kim chose to wear a black outfit.

Kim kept her hand close to her face mask.

Pete was walking close behind them and had a black cap covering his face.

The Rockwell song, Somebody’s Watching Me, played in the background.

Then, the Keeping Up With The Kardashians star and the Saturday Night Live comedian was spotted holding hands during a rollercoaster ride, according to People.

A source told the site that the trip to Knott’s Scary Farm was “just friends hanging out.”

The insider added: “They hang in the same circles so they will be together from time to time.”

Reps for Kim and Pete have not responded to the publication’s request for comment.

THE KISS ON TV

Back at the beginning of October, the two had planted a kiss during her SNL hosting debut.

During the wild episode, Kim and the King of Staten Island actor puckered up during their hilarious sketch of Disney’s Aladdin.

During the scene, Pete, who was dressed up as Aladdin, confessed he might not be able to handle his partner “sexually.”

Kim, who played the role of Princess Jasmine, asked: “Do you feel self-conscious because I’m the daughter of a Sultan and you are just a lowly street rat?

“Are you intimidated that I’m friends with a ton of wealthy celebrities and your only friend is a monkey?”

Pete revealed: “Jasmine, as we start getting more intimate, I’m just a little concerned that physically, I can’t handle you…

“If we go all the way, you might like break me…My thing might just break. Look at us. You’re a lot of woman and I’m so frail because all I eat is stolen bread.”

He went on: “I want to do everything with you, see the world, laugh together, sing songs and do sex.”

Kim responded: “Aladdin, don’t worry. I’m sure that you’re more than enough man for me.”

The TV star filed for divorce from the Donda rapper, Kanye West, 44, back in February.

The rocker recently proposed to the Kim’s younger sister on the beach while they were surrounded by thousands of roses and their families.

Additionally, Travis is a father to Alabama, 15, and Landon, 17, with his ex-wife Shanna Moakler, 46.