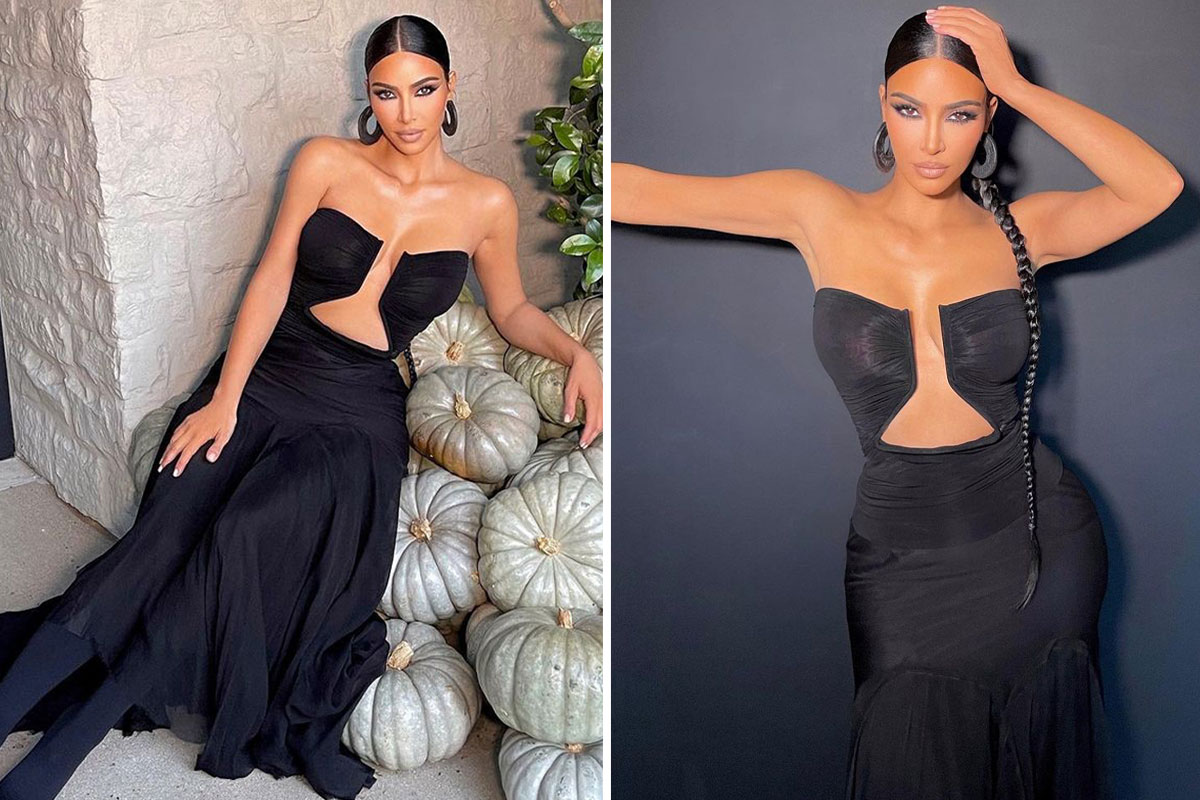 KIM Kardashian was bashed by her fans for wearing an “inappropriate dress” and for putting on “too much makeup” during her gal pal Paris Hilton’s wedding.

The Keeping Up With the Kardashians alum shared snapshots of her gorgeous black dress on Instagram.

In the first snap,  Kim, 41, teased cleavage while leaning against a pile of pumpkins.

Her eyelashes were thick in blackness and her hair was parted in the middle.

In the next snap, the reality star showed off how her long hair was braided into a single strand.

In the other photo, she stuck out her tongue and made a peace sign with her fingers.

As the slide concluded, she laughed with Paris, 40, while picking up the tail end of her wedding dress.

Kim captioned the post: “Pumpkin spice and everything nice for Paris’ wedding!”

Unfortunately, KUWTK fans were not too thrilled with Kim’s fashion look and jumped onto the comments section in Reddit to mock her.

Another critic added: “She looks orange around the edges.”

A third person said: “Yeah, I wasn’t a fan of that eyeliner.”

A fourth fan mentioned: “She looks great but not very wedding appropriate.”

Another commentator pointed out: “I can’t really see Kim as a bridesmaid these days. She’s too obsessed with being number one.

“I feel like she’d do it for her sisters, but only if she could pick out some insane bodycon dress.”

Recently, Kim made an appearance at Paris’ wedding to husband Carter Reum, 40.

The SKIMS creator reportedly arrived at the venue, which was held at Paris’ late grandfather’s $61.5M Bel-Air estate.

She went inside through a secret entrance, about 20 minutes before the ceremony began.

The E! star, however, had not invited her rumored boyfriend Pete Davidson, 27, as her date.

Instead, she decided to take her friend Kimora Lee Simmons, 46, as her date to the nuptials.

The two showed up at Paris’ wedding while wearing their elegant black gowns.

This was not the only wedding that Kim had recently attended.

Previously, in a slew of Instagram Stories from Tracy Romulus, the KUWTK star gave a hilarious and heartfelt speech at the wedding of Simon and Phil Riportella.

The reality star wore a stunning blue gown as she opened up about her failed relationships while holding onto the microphone.

Because she could not “figure out” how marriage worked, Kim “didn’t know what advice to give” to the newlyweds.

But after knowing Simon for “15 plus years” and Phil “for a long time,” Kim realized that their marriage “is going to work.”

She concluded: “I know real love when I see it.”

After about seven years of marriage, Kim filed for divorce from Kanye West, 44, back in February.

She was previously married to music producer Damon Thomas from 2000–2004.

The star also filed for divorce from former NBA player Kris Humphries after reaching up to 72 days of marriage.