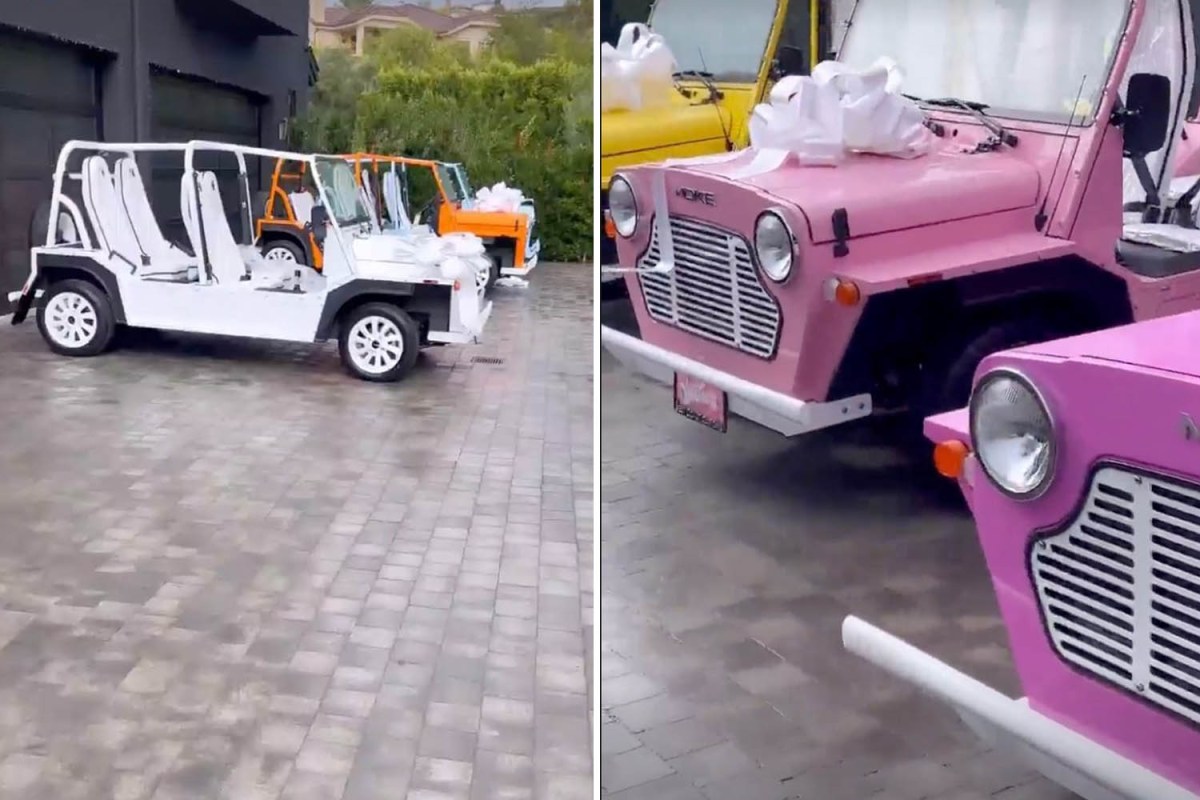 KIM Kardashian showed off the new impressive golf carts her mom, Kris Jenner, gifted her and other members of the famous family.

This comes just a short time after the TV family’s extravagant, but “scaled back” Christmas Eve party.

It all kicked off when Kim took to her Instagram Stories to share with fans the latest gift she’s received for Christmas: a pink golf cart.

In the short clip, the Keeping Up With the Kardashians alum gleams: “Oh my God, look at our Christmas presents from my mom and all of her kids.”

“And me too,” Kim’s daughter, North, says in the background, to which the TV star laughs and responds, “and you.”

Six golf carts are then seen including two pink ones, a bright yellow one, and a classic white one with a skull on the hood.

“Oh, this has to be Kourtney and Travis’ for sure,” Kim continues, referring to her sister and her fiancé.

“Khloe and I got the pink ones,” Kim, 41, concludes, showing off the two golf carts intended for her and her younger sister.

The clips were captioned: “Thank you mommy!”

The Kardashian family have been having quite the holiday season, despite their recent Christmas Eve party, which was smaller in numbers due to Covid.

Kim, Khloe, 37, and Kylie, 24, and Kendall Jenner, 26, as well as the rest of the Kar-Jenner clan joined together for the bash at Kourtney‘s Hidden Hills mansion.

Khloe stole the show in a jaw-dropping sheer silver dress, with matching nails, full glam makeup, and her hair worn in a blonde bob.

The reality star also filmed a mirror clip with her daughter True, three, who matched with her mom in a $3K Dolce and Gabbana silver dress of her own.

Kendall was spotted looking extraordinary, too, in a classy black floor-length gown, with an Audrey Hepburn-esque neckline and billowing mermaid bottom.

Prior to the party, Kim shared the family’s Christmas photos, which noticeably was missing her ex Kanye West as well as Khloe’s baby daddy Tristan Thompson.

Kim and Kanye– who share North, eight, Saint, six, Chicago, three, and Psalm, two – split up earlier this year when Kim filed for divorced in February.

Though the rapper has been refusing to stop calling Kim his wife as they aren’t yet officially divorced, the mom of four has since moved on with her new boyfriend Pete Davidson.

She’s also filed to become legally single from Kanye and change her last name back to Kardashian after he “embarrassed her” by begging for her to “run right back” to him.

As for Khloe, she is dealing with the fallout of yet another on of Tristan‘s cheating scandals.

The NBA player, 30, is currently in a legal battle with Maralee Nichols over paternity and child support.

A source exclusively told The Sun recently: “To call Khloe upset would be an understatement.