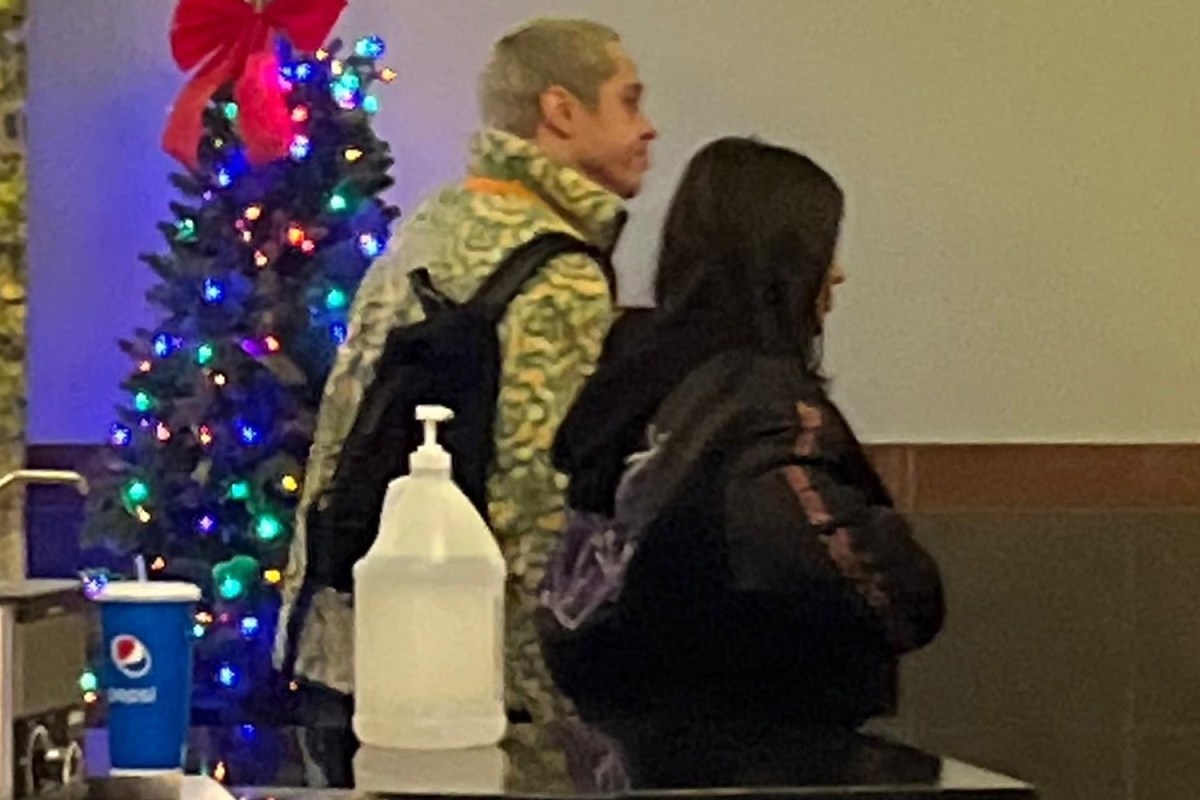 KIM Kardashian was spotted with boyfriend Pete Davidson enjoying a night out at the movies in the Saturday Night Live comic’s native Staten Island.

The romance between the KKW Beauty founder and Pete, 28, has been heating up in recent weeks.

Kim, 41, and her beau were photographed walking through a theater lobby side-by-side.

They kept it casual during the outing at the Atrium Stadium Cinemas.

Scott Disick, who shares three kids with Kim’s sister Kourtney, was in attendance as well.

The Keeping Up With the Kardashians alum wore a black hooded jacket while her new boyfriend was spotted wearing a more vibrant print.

He was also seen sporting a backpack over his shoulder.

According to Page Six Pete skipped out on SNL due to an in-house outbreak of positive Covid-19 cases.

A set insider told the outlet “four actors” tested positive — and “three others” called out because they were “fearful” about coming to NBC Studios.

Musical guest Charli XCX also dropped out of her performance, saying she was “devastated and heartbroken” by everything that has transpired.

This is one of many public date nights Pete and Kim have enjoyed since they were first linked in October.

Their latest romantic outing comes after Kim seemingly confirmed her relationship with Pete.

During an appearance on Honestly With Bari Weiss, the Skims founder gushed about the New York native.

Asked her favorite member of the SNL cast, Kim responded: “What a setup, what a setup, Bari.”

She then teased: “You know who it is.”

Kim and Pete have been seemingly going strong since they met during her October appearance on SNL — the first time she’s ever hosted the sketch show.

The pair reportedly had an instant connection while rehearsing an Aladdin-themed skit.

Not long after, they were spotted at Knott’s Scary Farm in California. They were joined by Kourtney Kardashian and now-fiancé Travis Barker.

Kim and Pete held hands on a ride together, which kicked off the rumors they were dating.

They reunited again in New York, enjoying a rooftop dinner at Pete’s favorite restaurant, Campania, and meeting up again for dinner at Zero Bond in Manhattan.

The two were later photographed holding hands as they prepared to board a private jet in Palm Springs in November.

They had been vacationing at Kris Jenner’s sprawling vacation home where they celebrated the King of Staten Island star’s birthday.

Pete is the first man Kim has been linked to since her split from Kanye West.

She filed for divorce from the rapper in February.

Speaking with Common Sense, the reality star opened up about her biggest regret from her marriage.

She reflected on the Chicago native’s SNL appearance, during which he wore a “Make America Great Again” hat.

Kim admitted that she “argued” with her then-husband, pleading with him: “You have to take that hat off.”

She went on: “I was very nervous. I didn’t want him to wear the red hat.

“I’m not really a rule-breaker, so my personality would be like, ‘OK, you guys don’t like the red hat? I’ll take it off.'”

Kim said in the interview: “Why should he take that off if that’s what he believes in? Why can’t he wear that on TV?”

She said she learned “from that situation,” noting that she needed to be a “little bit more empathetic for people that just want to do what they want to do.”

Kim said she respect that Kanye “knew exactly what he believed in and always stood by that.”

She said it was a “really cool quality” of his.

In closing, Kim said: “Even if it’s not what I agree with, or even if I would have done it differently, I think it’s commendable.”