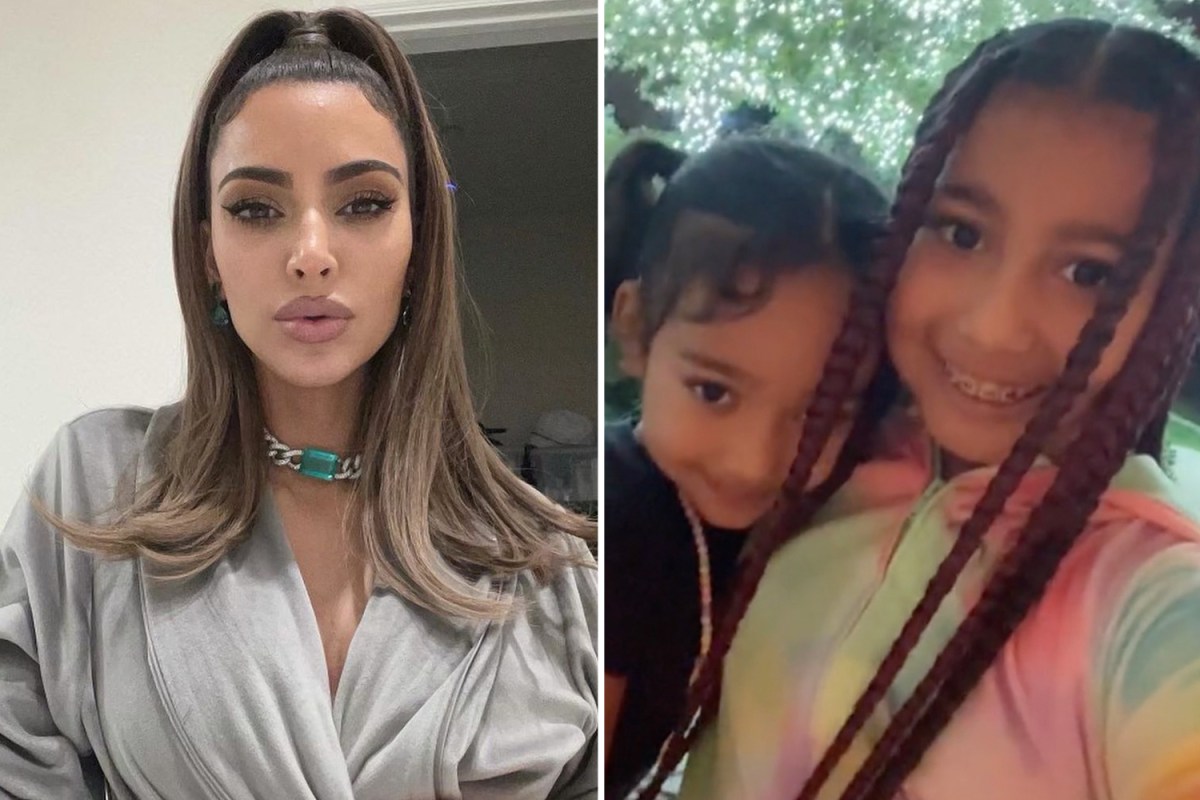 KIM Kardashian’s daughters North and Chicago both rapped to Eminem’s classic song The Real Slim Shady on a new TikTok.

This comes after their dad, Kanye West, appeared to be snubbed off this year’s Christmas photos.

North, eight, and Chicago, three, took to TikTok to star in a short clip featuring the sisters rapping along to the 2000 hit.

In the clip, North kicks it off by trying to follow the words as her younger sibling suddenly appears and begins to lip-sync as well.

The TikTok ends with North putting her arm around Chicago.

The youngsters were all smiles, however, the video comes just two days after their famous mom, Kim, shared with fans their new Christmas photos, noticeably without the Donda rapper.

Kim’s sister Khloe as well as their mom, Kris Jenner, also joined for a bunch of the shots, which saw the family members wearing matching red-brown, fuzzy loungewear from Kim’s Skims line.

The Kardashian’s big Christmas bash was scaled back due to Covid, and Kim ditched the elegant glamour behind for a comfy and casual Christmas look with her two daughters.

Kim took to her shared TikTok profile with her daughter North to share a fun video of their Christmas morning.

The Keeping Up with the Kardashians alum braided both her oldest child and daughter Chicago’s hair for a day of fun, while all three girls donned comfy pajama sets.

The TV personality ditched her formal garb for a low-key Christmas look as she enjoyed the holiday with her family.

Although the family was forced to scale down the normally lavish event, they still dressed up and embraced the holiday spirit.

Khloe, 37, Kylie, 24, Kendall, 26, and the rest of the Kar-Jenner clan joined together for an intimate Christmas Eve party at Kourtney‘s Hidden Hills mansion.

The sisters shared photos and videos of the beautiful get-together, as they donned their finest gowns for the evening.

The Kardashians made sure to bring all the holiday cheer for their brood of 10 kids, enlisting Santa Claus as the main attraction of their party.

Khloe filmed the holly jolly Saint walking through Kourtney’s foyer to the living room as kids Stormi, True, Saint, and Chicago raced after calling his name.

Despite the beauty mogul’s blossoming relationship with Saturday Night Live star Pete Davidson, he did not attend the sparkly soiree and instead headed back to his native New York.

Amid their newfound relationship, Kim snubbed her ex Kanye with whom she shares her four kids, North, Chicago, Saint, six, and Psalm, two.

The mother of four posed alongside her sisters and all their children for a family holiday photoshoot, but Kanye was not included.

The Kardashian crew took turns cycling in and out of photos to make sure every pairing was covered.

Some shots saw all the kids together for a cute cousin snap, either looking right at the camera and smiling or holding hands and dancing around.

All of the kids took turns swapping their spots in the photos, and sometimes they were just captured wandering around or looking away from the camera.

Kim also got some photos of just her with some of her kids singled out and also ones with all four of her kids.

She switched out of her maroon ensemble and into black drawstring bottoms and a long-sleeve black crop top that showed off her toned abs.

Despite all the different photo variations, the one constant was that Kim didn’t have ex Kanye participate in any of them.

The ex-couple filed for divorce in February, though the rapper has not stopped referring to Kim as his “wife.”

Kanye has made it clear he wants them to reunite and work on their marriage with a number of public displays, but Kim fired back by filing for single status in their divorce – which is yet to be granted by a judge.

“Kim wants things to be amicable with Kanye, he is the father of her children, but she has completely moved on, and he hasn’t,” an insider previously told The Sun this week.

Kim was seen leaving Pete’s New York home on Monday afternoon after spending an entire weekend together which included a cozy cinema date.

In a video obtained by Page Six, she left comic Pete’s Staten Island condo through the side door around 12:30 p.m. ET on Monday.

She attempted to keep a low profile in a baseball hat and all-black ensemble as she made her way into a waiting SUV.

Sources told the outlet that Kim was at Pete’s apartment throughout the weekend – even though they claimed she also had a room at the Four Seasons Hotel in the Financial District.