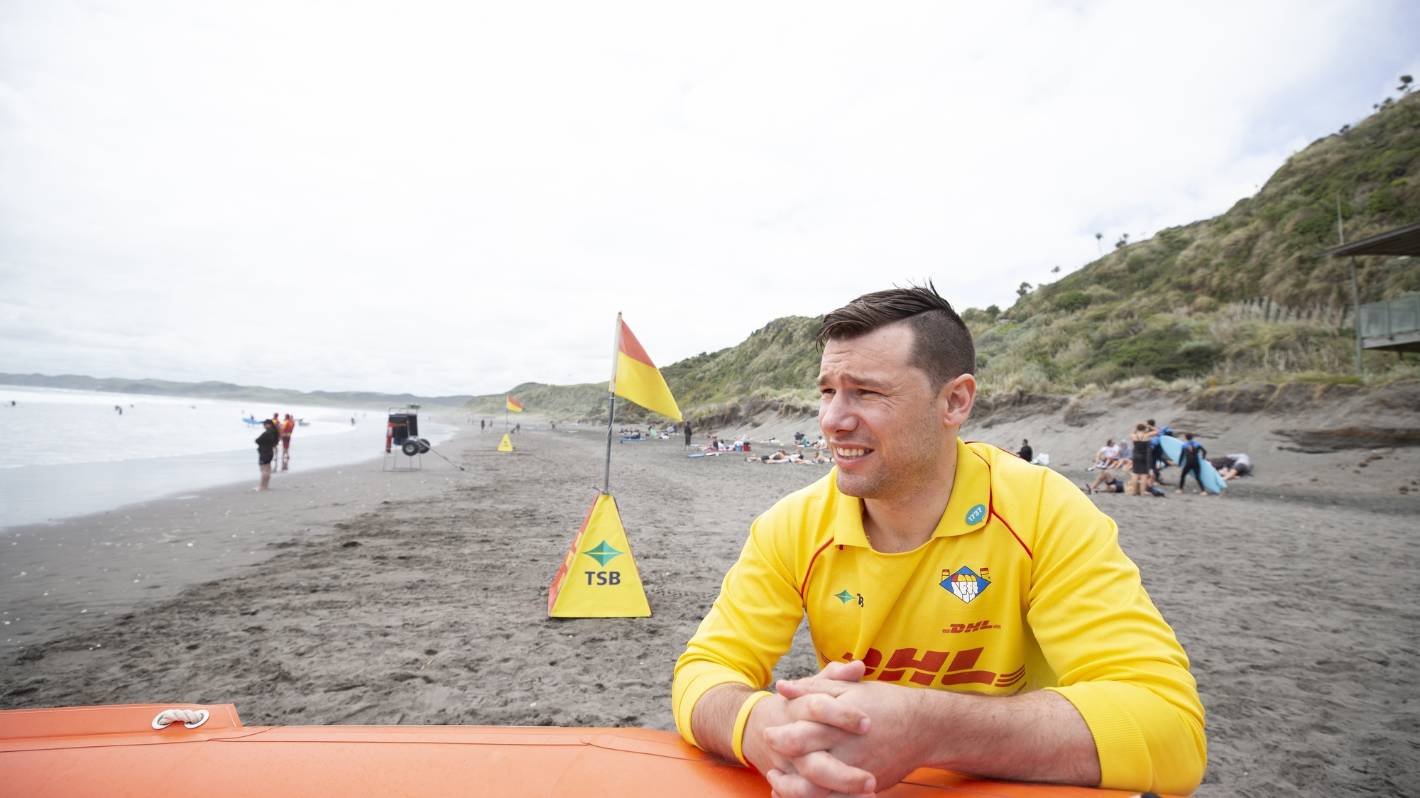 A kite surfer at the entrance to Raglan Harbour was in the right place at the right time to help save the life of a drowning woman during a dramatic Boxing Day rescue.

The woman, aged in her early 20s or late teens, was part of a group of five who had been swimming in the harbour and found themselves getting swept out the mouth, over the bar, on the outgoing tide about 5pm.

The alarm was raised by a member of the public who spotted the group in trouble and called the Raglan Surf Life Saving Club directly.

Because it was a public holiday the club was staffed entirely by volunteers, including patrol captain David Galuszka. He and another lifesaver jumped into an inflatable rescue boat (IRB) and powered to the scene.

Stay away from rocks and rips at the beach over summer, surf lifesavers say. (Video first published in November 2019.)

When they got there they found two members of the group literally in dire straits. The young woman was drifting in and out of consciousness and was being assisted by the kite surfer, who had happened upon the group and was using his board to keep her afloat.

“She was not in a good condition at all … I’d describe it as an extremely critical condition,” Galuszka told Stuff.

“It would have been a very different story had it been just another few minutes. They were super lucky that kite surfer happened to be there.”

The IRB crew soon “beached up” with the stricken woman and a St John Ambulance crew were quickly on the scene and rendered CPR.

Members of the Raglan Volunteer Fire Brigade had also been scrambled to the scene and the Waikato Westpac Rescue Helicopter was also called in.

The woman had suffered what is known as a “non-fatal drowning”, and was transported to Waikato Hospital in a critical condition. Her current status is not yet known.

Galuszka said he did not know the identity of the kite surfer who had helped save the day.

“The police went looking for him afterwards to talk to him, but they couldn’t find him. I have no idea who he was, unfortunately.”

It was only a matter of minutes later that the life savers were racing to another rescue, this time to aid a windfoiler who had found himself trapped on the bar after the wind dropped off.

Galuszka described the day as “a real stand-out”.

The presence of the additional emergency services had made the windfoiler’s rescue an easier task than it would have otherwise been, he said.

“The harbour entrance is a real black spot for our radio communications. We have to work on line-of-sight with our radios, which means that if something is happening around the corner, we have to relay messages to each other.

“I’m not sure how easily the problem could be fixed. Maybe another repeater out at the entrance could fix the problem. It’s something we will have to talk about with head office about at some stage.”

The woman’s rescue was a bright spot on a tragic Boxing Day afternoon on the country’s beaches.

Three people died in separate water-related incidents while swimming at beaches. Lifeguards pulled a 30-year-old man from the waves at Kariotahi Beach just after 2pm after reports he was in trouble. They were unable to rouse him with CPR and he died at the scene.

Only an hour earlier a woman died following a water-related incident at Waikanae Beach at Kāpiti. Details about that incident remain scarce, and it is not yet known if it was a drowning.

And a man drowned at Waiwera Beach just after 4pm. He was in a group of five who were caught in a rip. Lifeguards from the Ōrewa Surf Life Saving Club quickly launched an IRB and raced to the unguarded beach.

Four of the group were recovered alive, but the fifth could not be found. He was located in the water by the Police Eagle helicopter before a second IRB from Red Beach arrived at the scene.

Although St John staff performed CPR on the man he was declared deceased after 40 minutes.

“The whole Coromandel has been absolutely heaving for the most part. Lots of people have been itching to get to the beach during the lockdown. They are getting to the beach and are just jumping straight into the water, without actually checking the conditions first.

In total there were 11 rescues, nine people assisted, and two people given first aid by surf life savers on beaches in the northern part of the country on Boxing Day.

There were also 10 searches and just over 1000 preventative actions – stopping people from getting themselves into trouble – were taken.