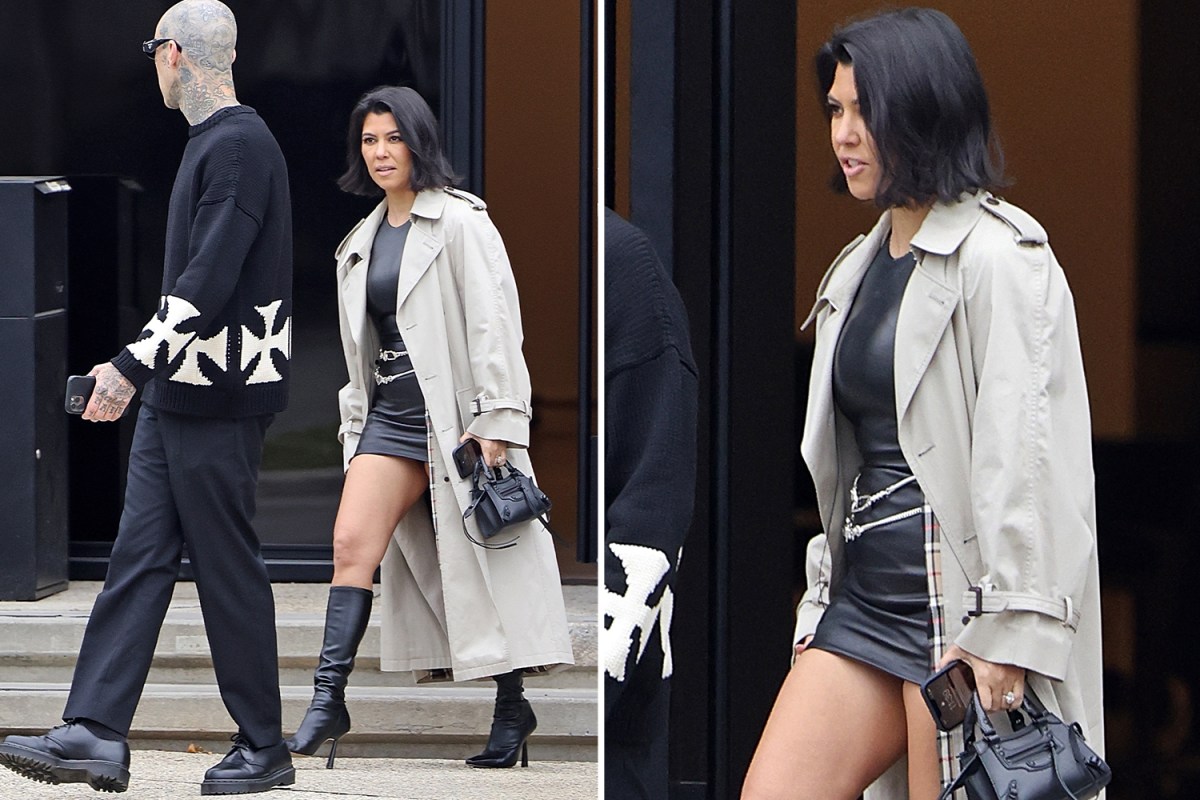 KOURTNEY Kardashian rocked the shortest dress EVER as she stepped out with fiancé Travis Barker.

The engaged couple were recently spotted on a coffee run.

While grabbing coffee with her man, Kourtney, 42, stunned in a tiny black leather dress, knee-high black leather boots and a beige trench coat.

The Keeping Up With the Kardashians alum paired the look with a tiny black purse.

Her toned legs were on full display as she rocked the risky look.

Meanwhile, Travis, 46, kept warm in an oversized black sweater with white designs at the bottom.

While Kourtney stayed close to Travis, the musician kept busy as he was seen talking on the phone and carrying two coffees in a cup carrier.

The couple were spotted as they prepare to celebrate Christmas as a couple for the first time together.

Earlier this month, Travis took to his own Instagram Story to share a photo of the couple’s Christmas tree, which was decorated with white lights and included a letter from Kourtney.

The handwritten letter read: “Our first Christmas since we’ve been fianced.”

The note concluded with the Poosh founder signing her name, while Travis tagged her Instagram account and added a red heart emoji.

In addition to the more traditional decorations, Kourtney has also been getting into the Christmas spirit by sharing her kids’ creative Elf on the Shelf scenes.

The mother of three posted videos of the elves wrapped in toilet paper along the banister of her staircase and lying on the stairs.

The TV star made sure to capture the moment her children saw the silly arrangement as toilet paper was strewn about the scene.

Kourtney’s kids surprised voices could be heard in the background as the star asked them: “What were they doing? What do you think they were doing?”

The couple previously faced backlash for their “inappropriate” PDA when they kissed and cuddled in front of Penelope.

In a TikTok video, the trio spun around in circles while the song Helicopter played in the background.

Before the video cut off, Travis could be seen grabbing his fiancée and trapping her in an embrace as Penelope continued spinning.

The youngster then whirled around and caught the couple nuzzling each other’s necks.

Additionally, the pair have been known to flaunt their sex life on social media.

Back in November, Kourtney gave Travis a lap dance in front of their friends for his 46th birthday.

Fans called her “embarrassing” for straddling Travis and “half-twerking” on him as he grabbed her butt at their friend Simon Huck’s wedding.

A wedding guest shared a clip of Kourtney with her legs around Travis as his band Blink-182’s 2000 song All The Small Things played in the background.

Meanwhile, Travis previously shared a video of Kourtney sucking his thumb as well as photos of them straddling each other and a photo of a messy bed which seemed to hint that they’d had sex in it.

Kourtney Kardashian and Travis Barker kiss in front of her daughter Penelope, 9, in TikTok