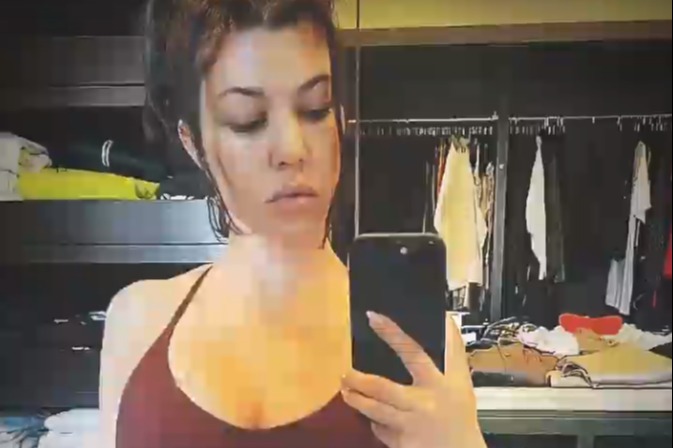 KOURTNEY Kardashian showed off her stomach in a crop top amid rumors she could be pregnant with fiance Travis Barker’s baby.

The baby speculation was sparked back in October and picked up momentum last week when Kourtney‘s step-parent Caitlyn Jenner hinted that another Kardashian is pregnant.

Amid the pregnancy rumors, Kourtney shared a selfie in her skintight workout gear before a gym session.

The KUWTK star, 41, wowed in a plum-colored sports bra and matching high-waisted leggings.

Wearing her hair back in a tousled updo, the Poosh founder appeared to go makeup free.

Kourtney and Travis have sparked pregnancy rumors in recent months, which amplified after they announced their engagement in October.

Internet sleuths have spotted several apparent clues on social media, including engraved hand cuffs with “Spring summer 2022” – which some thought could be a due date.

Meanwhile, at Kris Jenner‘s birthday party, Travis appeared to be rubbing her stomach as she handed him a drink.

The clip was shared on Khloe Kardashian‘s Instagram Story, and fans started speculating from there.

One commenter wrote: “Prego vibes,” as another added, “Passionate. I love them.”

Kourtney’s step-parent Caitlyn Jenner fueled speculation that Kourtney may be expecting her fourth child with the rocker last week.

The 71-year old opened up about the number of grandchildren in the Kardashian clan during an interview with Good Morning Britain.

When asked about their relationship, the TV star spoke about her grandchildren.

The reality star claimed there were reportedly “two in the oven.”

Caitlyn said: “I told all the kids. I’m going for 30 grandchildren. That’s a nice round number.”

Kylie Jenner, 24, is currently pregnant with her second child with her boyfriend Travis Scott, 30, who is also the father to Stormi, three.