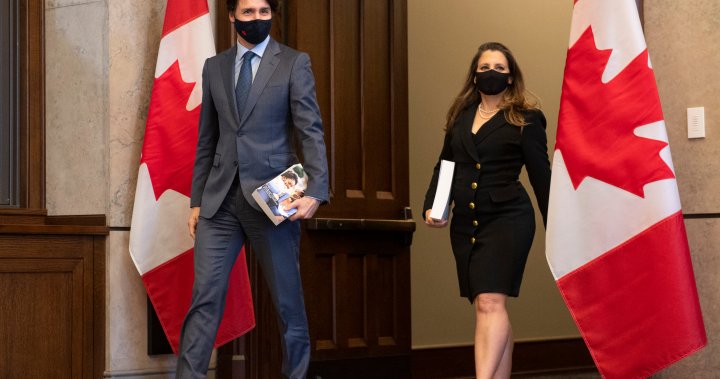 The Trudeau Liberals are set to unveil an update on the health of federal finances and its outlook for the economy while facing competing demands on benefits, taxes and economic growth.

It’s a tall order for a document that the Finance Department has signalled won’t include a bevvy of new spending items.

The government outlined its major priorities in the spring budget, such as a national child-care system, said David Macdonald, senior economist with the Canadian Centre for Policy Alternatives.

From a political standpoint, the government doesn’t have a lot of time before the holiday season to promote any new, major measures, Macdonald said. The government will likely wait for next year’s budget for any big spending proposals, he said.

“I don’t think that there’s going to be a lot of actual new policy despite the fact we just had an election,” Macdonald said.

“There’s likely to be very little in there except the deficit figures are smaller, probably.”

The government predicted the deficit for last fiscal year would be $354.2 billion, and nearly $155 billion this year. But federal books could have as much as $10 billion in extra fiscal space helped by higher oil prices, which have also helped push up inflation rates.

Inflation rates that have hit 18-year highs, along with strong growth in employment and the domestic economy, could cause the government to ease up on its platform spending plans, said Stephen Brown, senior Canada economist with Capital Economics.

In a note, Brown wrote that extra spending seems more likely to push up inflation by the time any changes take effect.

“It will be more interesting to see if the government follows through with its myriad policy proposals for the housing market, which included a ban on purchases by foreign investors,” he wrote.

Finance Minister Chrystia Freeland suggested this week that the document would give an outlook on the path of this year’s deficit, and an accounting of new aid proposals that the government estimated to cost $7.4 billion.

Some of those calculations have to do with the effect the Omicron variant may have on case counts, and any subsequent need to tighten public health measures or impose lockdowns to slow the spread of the virus.

Bea Bruske, president of the Canadian Labour Congress, urged Freeland to use the document to spend more on benefits, saying in a statement that there are still thousands of workers who are facing financial uncertainty because of COVID-19.

1:55
4 out of 5 Canadians concerned about rising inflation costs: Ipsos poll

She also suggested the government could use the document to outline its proposed changes to the employment insurance system, whose long-known shortcomings were exposed by the pandemic.

“The fiscal update must make clear that the federal government is prepared to make investments to make life more affordable and ensure vital services, like EI, are there for people when they need it,” Bruske said.

The Chartered Professional Accountants of Canada said Friday that the government could use the update to detail previously announced tax proposals that are supposed to kick in next year, including one on purchases of luxury cars, planes and yachts, and another on foreign-owned vacant homes.

“Some of the changes are supposed to apply in less than a month,” said Bruce Ball, CPA Canada’s vice-president, taxation.

“We’re looking for some clarity in terms of how that’s going to happen and also some reasonable time frames to allow consultation on the things that are still very conceptual and ? time for businesses to adjust.”