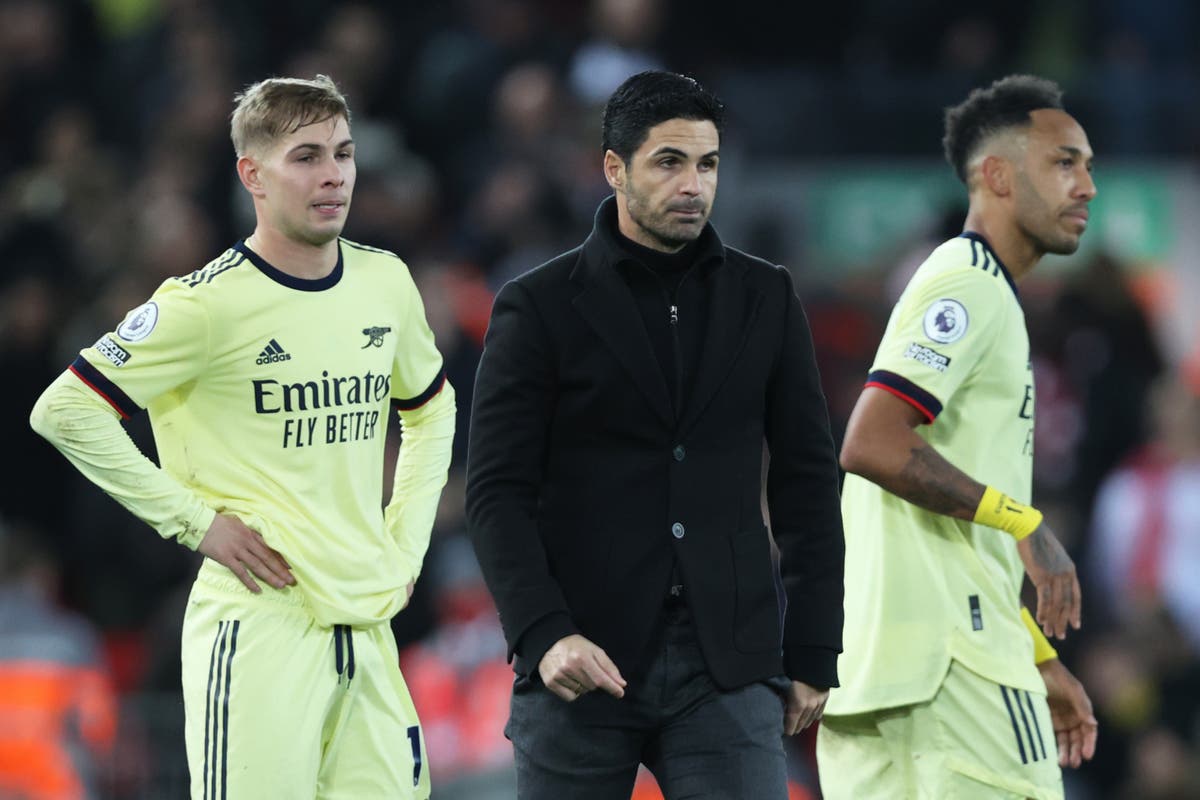 For 39 minutes the Gunners fought and battled well, keeping Liverpool at bay with a mixture of solid and scrambling defending.

But, when Sadio Mane headed home after some poor marking at a free-kick, Liverpool never looked back on their way to victory.

Try as Arsenal might, they could not get back into the match and the manner of this defeat will have hurt Arteta.

The second goal came after Nuno Tavares won the ball in defence before passing it straight to Diogo Jota, who danced his way through to score.

By the time Mo Salah and substitute Takumi Minamino had got in on the act in the final 20 minutes, Arsenal’s defensive shape had completely gone.

Perhaps this is the reality check Arsenal need after their 10-game unbeaten run came to an abrupt end? They have made good progress under Arteta, and that must not be forgotten, but this was a reminder of how there is still plenty of work ahead.

It was also a reminder of how this is a young Arsenal team, which brings errors like we saw from Nuno.

The key for him, and Arsenal, is how they respond to this loss. They must not allow their good work this season to come undone during the busy Christmas period.

The last time Arsenal won at Anfield in the Premier League, Arteta was starting in central midfield.

And the Spaniard must have begrudgingly been impressed with the way that Fabinho bossed the middle of the park here.

All the talk before the game had been about how Arsenal needed Thomas Partey fit, but he was overrun by the Brazilian.

Fabinho was everywhere, breaking up play and starting Liverpool attacks with an accomplished range of passing.

Liverpool’s attack will get the plaudits for this win, but Fabinho was right at the very heart of it. He stopped Arsenal from ever really getting any attacks going and Alexandre Lacazette, who has been excellent in recent weeks, was largely anonymous.

There are few players in the Premier League who can do what Fabinho does and tonight he showed his quality, much to Arsenal’s pain.

This was likely a match Albert Sambi Lokonga and Nuno will want to forget quickly, but the hope for Arsenal is that they learn from it.

Lokonga has made a bright start to life at Arsenal since joining in the summer, however he had a torrid time at Anfield.

The start of the second half, in particular, was painful to watch as his passing radar completely failed him. Time and time again he gave the ball away, so much so that Arteta hooked him just eight minutes after the break.

It was a harsh but fair call from Arteta and Lokonga will know he can and must do better.

The same goes for Nuno, who has also impressed since joining in the summer. He was sloppy in possession for Liverpool’s second goal and, at Anfield, you can’t afford to be like that. It was a painful lesson for the youngster.