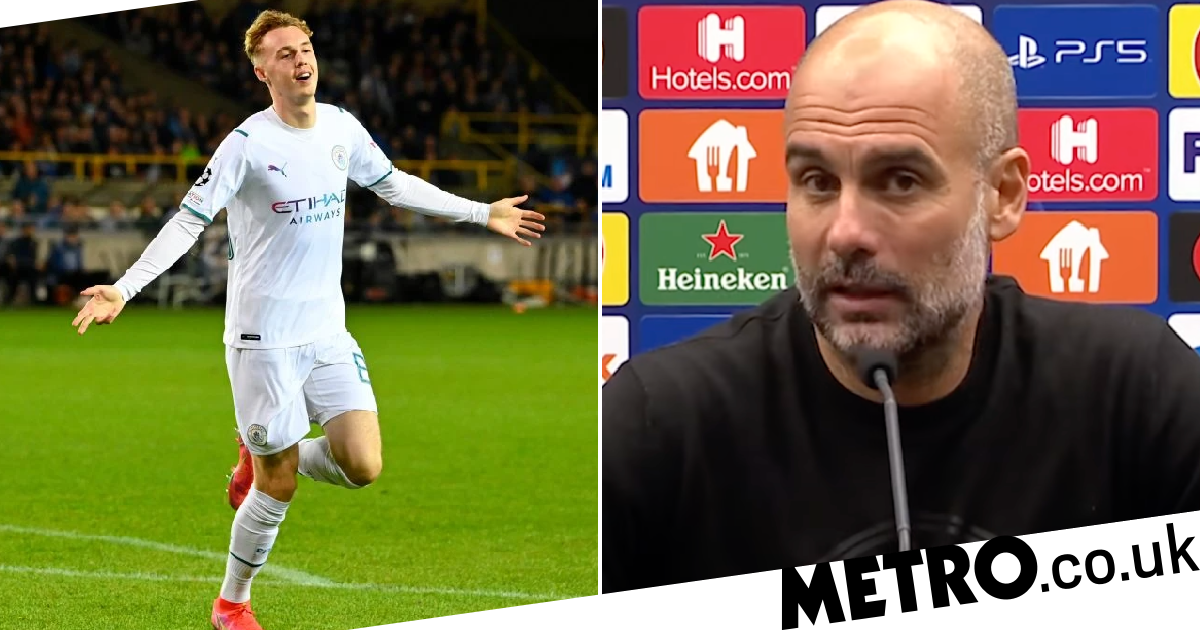 Palmer, 19, came off the bench to score City’s fifth in Belgium, with Riyad Mahrez completing a double and Joao Cancelo and Kyle Walker also finding the net in a one-sided Group A clash.

The result ensured the Premier League champions went top of the group ahead of PSG’s encounter with RB Leipzig and Guardiola was understandably delighted with his side’s emphatic display away from home.

Guardiola was especially pleased for teenage midfielder Palmer, who scored his second goal of the season in the 67th minute and further proved why he is being touted as the next big thing to emerge from City’s academy.

The England Under-21 international displayed superb composure to find the corner of Simon Mignolet’s net and showed several other glimpses of his undoubted ability in an eye-catching cameo appearance.

‘Cole has a special quality in front of the box, a talent that is difficult to find,’ the City head coach told reporters shortly after the final whistle.

‘When he has the ball there, most of the time it ends up in the net. It’s difficult to find that.

‘I know how it works with young players. We have to be calm and patient. His position is the second team but at the same time he trains with us and works with our principles.

‘I am happy with the goal. He could have done a few actions a little bit better, but that is normal. It is experience.

‘Step by step we give our young players an opportunity.’

Asked whether Palmer could follow in the footsteps of fellow academy product Phil Foden, Guardiola replied: ‘Phil is Phil and Cole is Cole.

‘Phil is already a reality otherwise he would not be with the national team.

‘How many minutes has he played. Phil is Phil. Cole is a teenager. He is a young player and still has a lot of margin to improve and is still a way from Phil. We cannot compare.

‘I say look at the minutes on the training pitch. Cole is always there in training.

‘He played a few minutes at Burnley and then went and scored three goals for the second team. Some players would go and be lazy and not want to play.

‘He is completely the opposite. He goes and scores three goals. The people in this world want things immediately. Everything needs time. You cannot cook a good dish if you don’t spend time in the kitchen.’

The Spaniard called for patience with Palmer and City’s other emerging talents from the academy.

‘The important thing is time. Not just him, Liam Delap, James McAtee, Sam Edozie, Romeo Lavia,’ he went on.

‘We have four or five really talented players in the academy.

‘If they stay humble and work, maybe they can be important players for City in the future.’