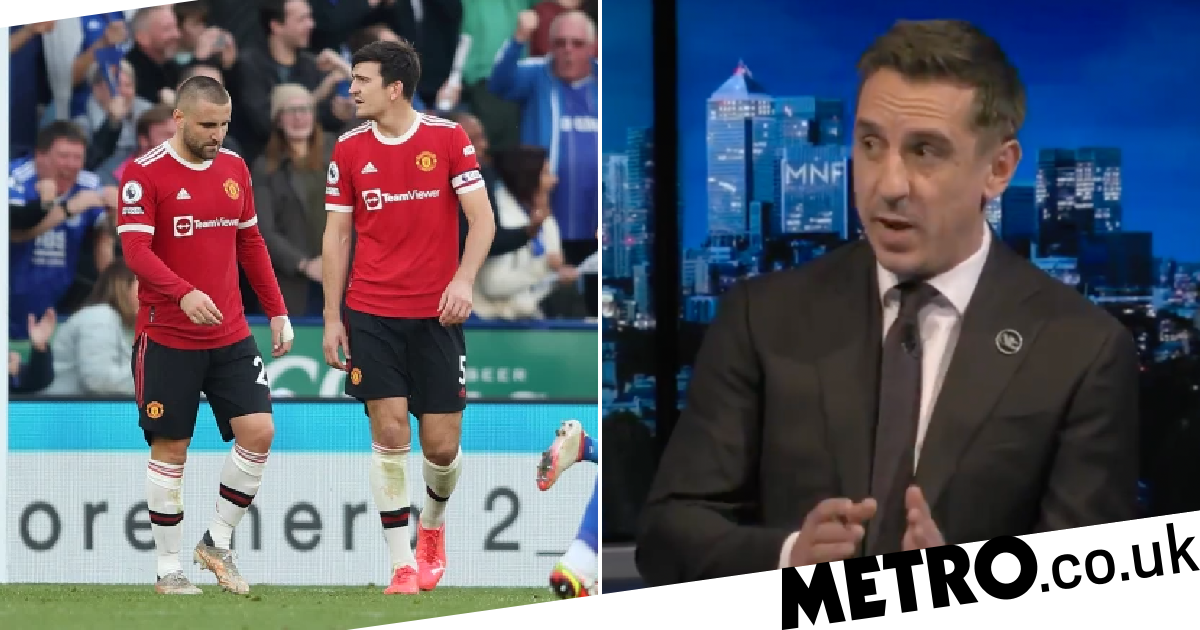 Gary Neville believes Ole Gunnar Solskjaer’s decision to start Harry Maguire in Manchester United’s 4-2 defeat to Leicester was his ‘biggest mistake’ given the defender was ‘absolutely nowhere near’ match fit.

Maguire returned from a month on the sidelines to play alongside Victor Lindelof at the heart of United’s defence on Saturday and the England centre-back badly struggled in the opening stages against his former club, losing possession in the build-up to Youri Tielemans’ equaliser at the King Power Stadium.

Solskjaer stuck with Maguire for the second half – despite having Eric Bailly on the substitutes bench – and the decision proved costly, with Kelechi Iheanacho continuing to torment the Red Devils captain as a flurry of late goals sealed victory for the Foxes.

The result saw sixth-placed United lose even more ground on their Premier League title rivals, placing Solskjaer under intense pressure after a miserable run of four defeats in seven games in all competitions.

‘On Saturday, the biggest mistake that Ole Gunnar Solskjaer made that I could think of watching that game again was the selection of Harry Maguire,’ ex-United right-back Neville said on Sky Sports’ Monday Night Football.

‘He was absolutely nowhere near. We were talking earlier about when we’ve had one of those games in our career where we’re not fit, nowhere near it.

‘I think picking him in the first place was a big problem. Maybe the panic of not having [Raphael] Varane and Maguire caused him to do that, but then not taking him off at half-time because it wasn’t just the goals that Harry Maguire was involved in. Just generally, he was nowhere near it.’

Neville feels Bailly should have started alongside Lindelof, despite the fact the Ivorian has made just one Carabao Cup appearance for United this season.

‘I watched Thomas Tuchel after the game give Malang Sarr and Trevoh Chalobah starts [against Brentford] and the game and the belief for Chelsea so it can happen and I think Eric Bailly should have played alongside Lindelof,’ he added.

‘That was the biggest mistake that happened on Saturday because I think if Harry Maguire had been fit and anywhere near – someone who has been a brilliant player for United for the last two years – then Manchester United wouldn’t have had the problems they had.

‘The first problem the manager had was definitely selecting Harry Maguire.

‘He’d not played for four weeks and he was nowhere near it.’