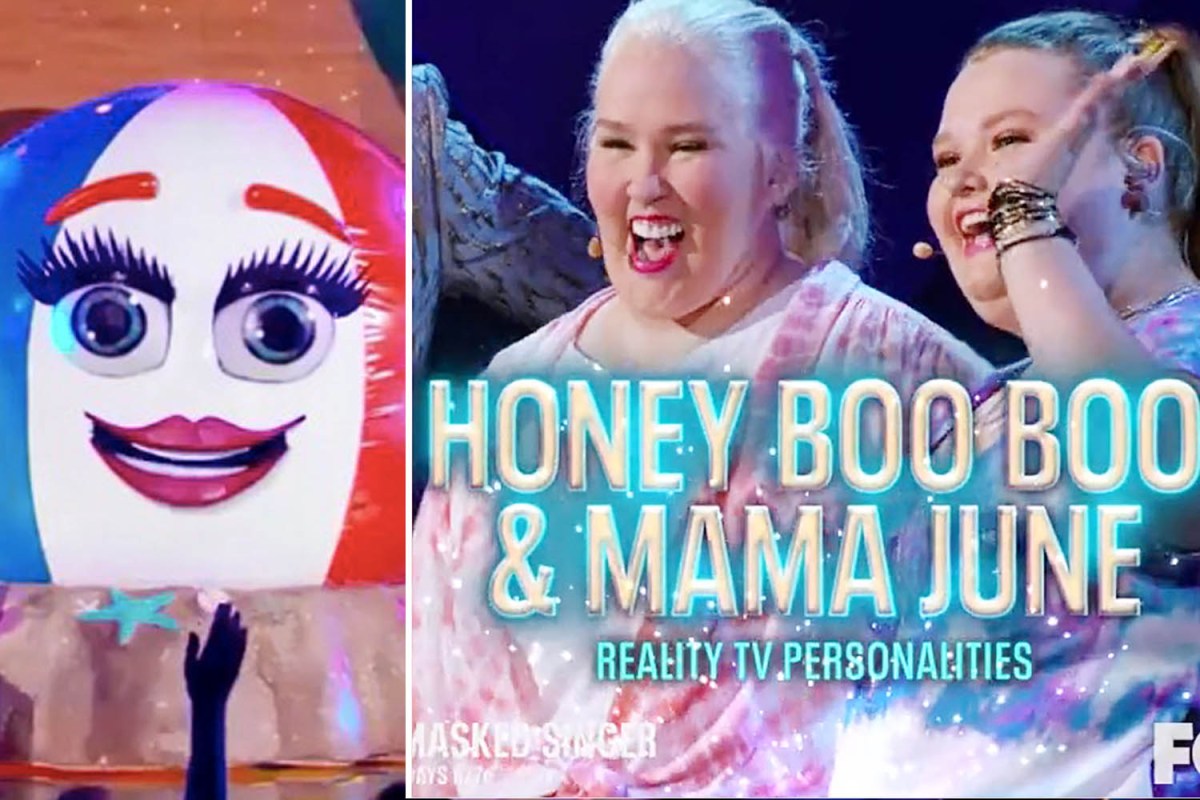 THE Masked Singer fans slammed Honey Boo Boo and Mama June as the “worst performers EVER” in the show’s history.

The backlash comes as the pair were eliminated from the show during Wednesday’s episode.

During the latest episode of The Masked Singer, the Beach Ball made its debut as the final wildcard contestant of the season.

It was soon revealed that the Beach Ball was actually two women competing together.

Following their performance of Miley Cyrus’ Party in the USA, the Beach Ball received the lowest votes and host Nick Cannon, 40, revealed they would be sent home during the Thanksgiving-themed episode.

Before their identities were revealed, the panelists took turns guessing who the voices behind the Beach Ball were.

Jenny added that MTV stars “would totally have a party inside of a ball.”

Meanwhile, Robin Thicke noted the contestants “literally brought the shore to the stage” due to the performance’s beach-themed setup.

However, the 44-year-old said the singers were not the Jersey Shore stars and instead were 2 Broke Girls stars Kat Dennings and Beth Behrs.

Guest judge Joel McHale, 49, insisted the singers Snooki and J-Woww, while Nicole Scherzinger, 43, guessed it was Kristen Wiig and Annie Mumolo from Barb and Star.

It was then that the singers were revealed to be mother-daughter duo June “Mama June” Shannon, 42, and Alana “Honey Boo Boo” Thompson, 16.

Fans were not surprised that the pair was eliminated, as many viewers took to Twitter to criticize their singing skills.

One fan wrote: “That had to be the worst performance I ever heard on this show.”

Another added: “Mama June was a tiny bit better than Honey Boo Boo but they were both tone deaf. So I see why they didn’t last past tonight.”

A third chimed in: “What a waste of an episode.”

Others slammed the show for their choice in contestants, as one person wrote: “I’ve had bowel movements that could sing and perform better than honey boo boo and mamma June. I understand getting B and C list celebrities but, damn. Getting people whose fifteen minutes expired years ago is sad. S**t, I’m available next season.”

Following the unmasking, the pair were asked how it was to be inside of the beach ball.

Alana answered: “It was definitely very hot and we had a lot of things going on.

“We had to make sure we didn’t roll off the stage.

“She was in the back of the ball, you know I had to be the star of the show!”

In their clue package, the mother-daughter duo reflected on their “time apart.”

June told the judges: “I was in my addiction. I was away from my kids for two years. Now I’m celebrating two years clean.

“This is the first project- outside of our show- that we’ve done together, so it feels kind of nice.”

She added: “I cried. That’s why I missed the first line. I always do whenever she performs.”

The pair are the latest contestants to be eliminated from The Masked Singer.

During the last episode, Ruth Pointer was unmasked as Cupcake when she revealed her sister and singing partner, Anita, was supposed to compete with her on the show, though quit due to “health reasons.”

After the contestant’s identity was revealed, the judges appeared visibly shocked as Nick said she “threw everyone off.”

The 75-year-old told the judges: “There was supposed to be two Cupcakes and Anita’s having some health issues that we couldn’t avoid, so I ended up doing it by myself.”

When Nick asked if the eliminated contestant wanted to say anything, she shouted out her famous sister Anita: “Sweetheart, I love you! I came to do what I needed to get home and support you.”

She continued: “Thank you guys for having me! I’m a big fan of the show, I’ve been watching it the whole time.”