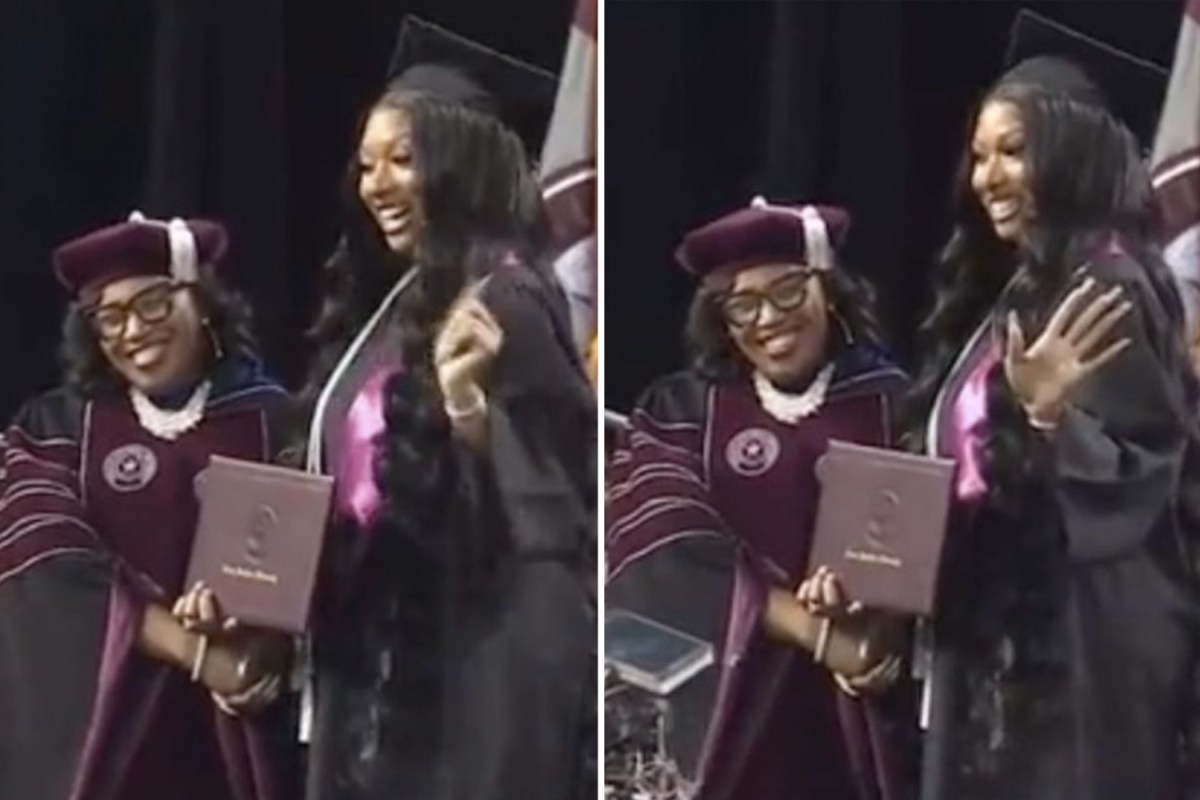 MEGAN Thee Stallion’s fans are “so proud” as she graduated from Texas Southern University after a “rollercoaster” college experience.

Even after the 26-year-old rapper’s incredible rise to fame and tragic loss, the star remained dedicated to completing her college degree.

In Megan’s graduation video going viral on Twitter, the crowd roared as her real name – Megan Pete – was announced.

Megan appeared to be ecstatic, and her personality shined as she showed off her diploma and posed with her school deans.

She waved to the crowd and and reveled in her moment of the result of her perseverance and dedication.

Megan got her degree as a Bachelor of Science in Health Administration.

She attended the College of Pharmacy and Health Sciences.

Fans were just as supportive of the star as many rushed to comment.

One wrote: “Isn’t her surname thee stallion?” and a second replied: “No, it’s thee graduate.”

A third shared: “I’m so proud of her. Real hot girl s**t,” as another responded: “Real Educated Girl S**t.”

Back in July, Megan posted on Twitter that her college experience “has been a roller coaster.”

She said: “I started at PV went to some community colleges in between and I’m ending at TSU. Don’t get discouraged! You can chase your dreams and your education at the same time.”

Megan had been taking online classes part-time for the past few years.

On Instagram, she made the announcement about graduating a few days before the ceremony.

She captioned her post: “I’ll be graduating from my HBCU TEXAS SOUTHERN UNIVERSITY this Saturday!! I want y’all to remember that you can do whatever you wanna do and be whoever you wanna be, cause look at me!”

In 2020, Megan shared her reasoning for remaining in school despite her overwhelming fame.

When opening up about why she’s in school, the star reportedly said: “I want to get my degree because I really want my mom to be proud.

“She saw me going to school before she passed.”

Megan’s mother passed away in 2019 after a battle with brain cancer.

She is also reportedly thinking about setting up a center to encourage her fellow TSU-graduates to find work after school and strengthen the community.

She said: “I really wanted to be an administrator over a hospital, but I knew I still wanted to be Megan Thee Stallion. I was like, ‘What can I do?'”

“I was like, ‘You know what, I’m gonna open an assisted-living facility and use the money that I make from rapping to open it. Then I’m gonna let my classmates run it.”

She sadly lost her grandmother shortly after her mother passed away, but Megan has big plans of making her family proud.

Megan said: “I want my big mama to be proud. She saw me going to school before she passed.

“My grandmother that’s still alive used to be a teacher, so she’s on my butt about finishing school. I’m doing it for me, but I’m also doing it for the women in my family who made me who I am today.”

Back in October, Megan shared a slew of raunchy and sweet photos with her boyfriend Pardi Fontaine to celebrate their one-year anniversary.

The WAP hitmaker held a drink using just her butt as Pardi took a sip, in one wild snap taken on vacation.

In another, Pardi, 31, pretended to take a bite out of Megan’s butt as she snorkeled in a green thong bikini.

The couple also showcased their playful side as they jumped on a trampoline at a fitness center, before Megan leapt onto Pardi’s back in front of a private jet.

The Savage singer also included shots of the pair from the Grammy Awards and the iHeartRadio Music Awards.

Pardi reciprocated by posting a minute and a half long video full of sweet moments from their relationship.

Set to John Legend‘s ballad All Of Me, the video showed the couple kissing, cuddling and messing around for the camera.

Megan confirmed dating rumors back in February during an Instagram Live video.

She said Pardi “is so calm and so sweet. And very, you know… That’s my boo. And I really like him… He is so perfect.”

The Hot Girl Summer hitmaker praised him to actress Taraji P. Henson, who appeared on her “Body” music video, on her Facebook Watch series Peace of Mind With Taraji.

At the end of November, the rapper pulled out of performing at the American Music Awards.

“I was so excited to go to the @AMAs and perform with @BTS_official, but due to an unexpected personal matter, I can no longer attend,” the Savage hitmaker wrote.

“I’m so sad!” she continued. “I really can’t wait to hit the stage with my guys and perform #BTS_Butter real soon!”

The 26-year-old star was due to perform track Butter with K-pop band BTS.

Megan didn’t detail what the personal matter was but earlier in the week she revealed her devastation at the death of pal Young Dolph.

Dolph, a rising star in the rap world, was murdered in Memphis, Tennessee on Wednesday while buying cookies for his mother. He was 36.

After hearing the news of his death, Megan tweeted: “I am sooo sick rn I am in disbelief! Praying for his family and friends! Rest In Peace to my friend a true legend dolph.”