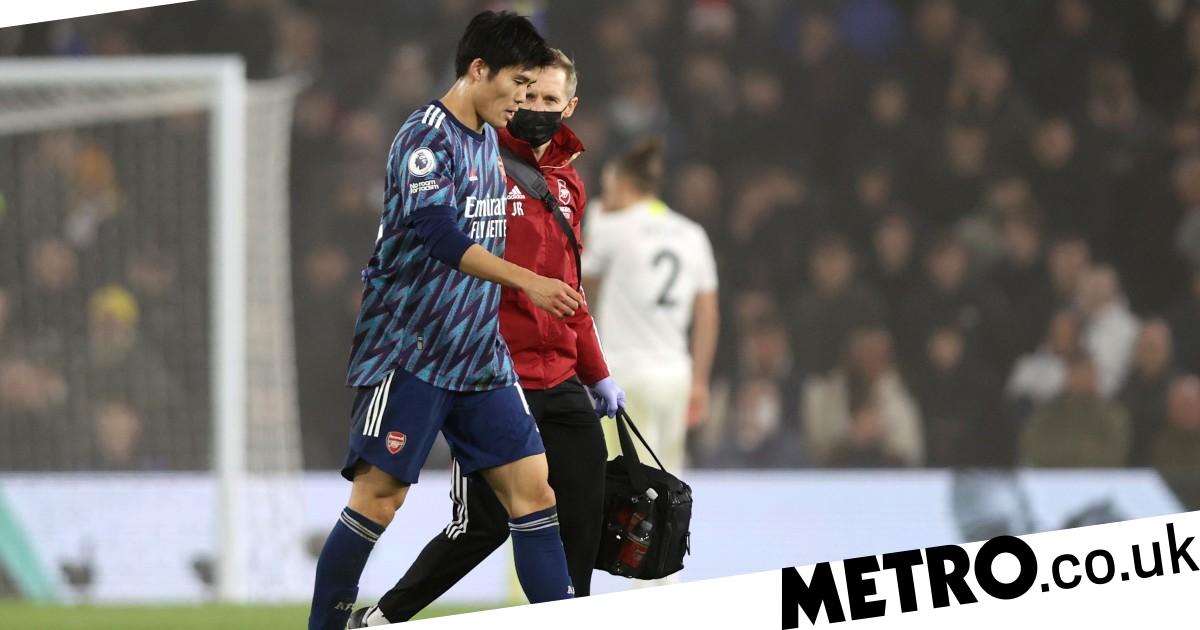 Mikel Arteta has revealed Takehiro Tomiyasu was taken off against Leeds with a muscle injury, while also confirming Pablo Mari wasn’t involved today after testing positive for coronavirus.

Arsenal ran out 4-1 winners in their trip to Elland Road with Gabriel Martinelli (2), Bukayo Saka and Emile Smith Rowe all getting on the scoresheet.

In a match that Arteta will take plenty of positives from, there was one concern with defender Tomiyasu, who was taken off in the second half not long after being on the receiving end of crunching tackle on his ankle.

But the Spaniard says it was regarding a muscular issue instead.

‘No it was more a muscular issue,’ Arteta explained. ‘Obviously, he’s got a big load on him.

‘He’s played every single minute since he joined us and even this week he’s been a little bit struggling.

‘So we decided to take him off, he wasn’t 100% confident to continue in the game and hopefully he’s not injured.’

Arsenal’s match against Leeds was the only Premier League game to take place on Saturday with five other games postponed due to Covid-19 outbreaks.

Arteta confirmed before kick-off that Albert Sambi Lokonga missed the game after testing positive and at full-time he revealed defender Mari was the latest Arsenal star forced into isolation.

Asked why their London Colney training ground was shut on Thursday, Arteta said: ‘Pure precaution because we had some cases in the staff and we wanted to prevent any issues.

‘Everybody we have seen around us, when they have a few cases the cases have risen.

‘We wanted to protect our people and Gary [O’Driscoll] and the medical staff made the right call, to try to close it for a day, stay away from the place, make sure that all the tests from everybody were negative and make sure that when we were back, everybody was safe.

‘We had another player, as well Pablo has Covid, so unfortunately they [Mari and Lokonga] will be out.’