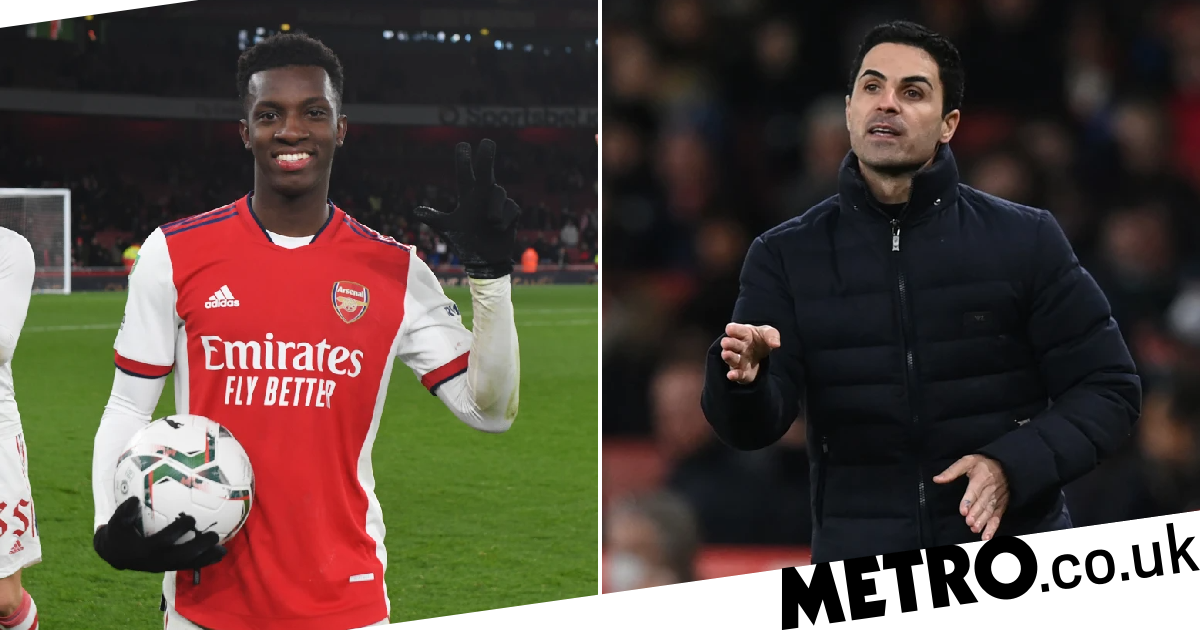 Mikel Arteta insists Arsenal are still trying to convince Eddie Nketiah to sign a new deal with the club.

The 22-year-old is out of contract at the end of the season and has so far refused to put pen to paper on a new deal as he looks to gain more playing time elsewhere.

Ahead of the January transfer window, Nketiah put in a man of the match display in Arsenal’s 5-1 win over Sunderland on Tuesday night as he bagged a hat-trick to send them through to the Carabao Cup semi-finals.

Arsenal look to have reached a standoff with Nketiah and his representatives but Arteta has gone public once again with his desire for the young striker to extend his stay in north London.

‘It’s what he does every day in training, puts the ball in the back of the net,’ said the Spaniard.

‘I think I’ve been very consistent with what I think about Eddie… how much we like him and his contribution in the team every time he plays is top.

‘That’s what I want [to convince him to stay]. He’s just willing, his only thing is he that he wants more minutes and that’s his decision.

‘It’s difficult to go against him but as a club and me personally I really want him to stay here and that’s what we are trying to do.’

Nketiah has made just six appearances this season, three of them in the Premier League, and has scored five goals in all competitions.

The striker was asked if there was any truth in reports he’d refused to sign a new contract, and while not answering the question directly, he did indicate his desire to be playing more often.

‘I’m desperate to play football. All I can do is keep working hard. It’ll sort itself out,’ he said.

‘Hopefully we can go all the way.

‘I’m just eager to play football. That’s my main ambition. As long as I play for Arsenal I’ll give my all.’


MORE : Three Arsenal players who impressed and one who struggled in Sunderland win as Gunners reach Carabao Cup semi-finals