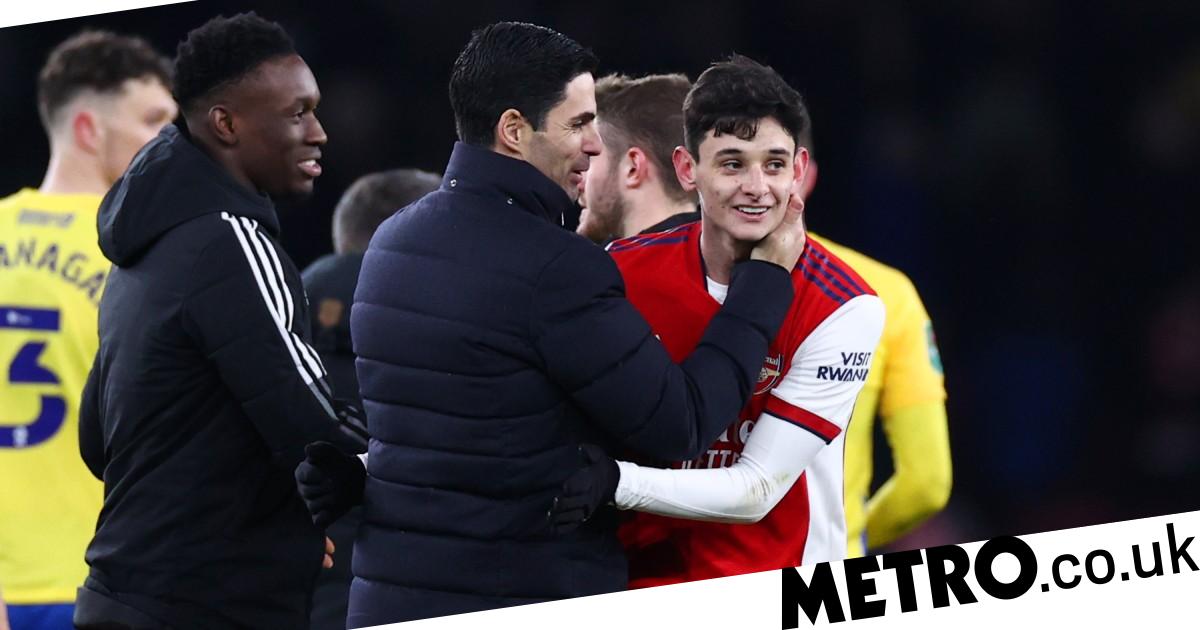 Mikel Arteta says it was a ‘beautiful moment’ to see Charlie Patino score on his Arsenal debut in their 5-1 win over Sunderland.

The Gunners secured their spot in the Carabao Cup semi-finals as Eddie Nketiah’s hat-trick and Nicolas Pepe’s strike proved decisive.

Patino came off the bench with just 10 minutes to go and the highly-rated 18-year-old netted the fifth goal of the night in injury-time, converting from Pepe’s cross.

‘A beautiful moment. He is a kid that is coming through our system, a lovely kid,’ said Arteta.

‘He is training with us almost every week. It was a dream.

‘As a debut to come here, to score in front of our fans, a really special moment.’

Patino, who was born two months into Arsenal’s famous Invincibles season of 2003-04, is highly regarded by the club’s youth coaches and has been with them since the Gunners paid Luton £10,000 to sign him when he was just 11 years old in 2015.

He’s already played for the England Under-19s and with the midfielder scoring his first senior goal with his first shot in professional football, Arteta is well aware of the hype around him at such a young age.

‘That [too much hype] is what we have to avoid. He still has a lot of competition in front of him,’ said Arteta.

‘He is really young. And he needs to go step by step. Today he was lucky, he got the opportunity and he took it really well.’

In a night that the young teenager will never forget, Arsenal fans made it even more memorable by chanting his name at the end of the match.

‘I know, I know. I think that is very positive,’ Arteta said of the chanting.

‘They heard about him and know what he can become and now we have to cook him slowly. Today was a good start, I think.’


MORE : Three Arsenal players who impressed and one who struggled in Sunderland win as Gunners reach Carabao Cup semi-finals