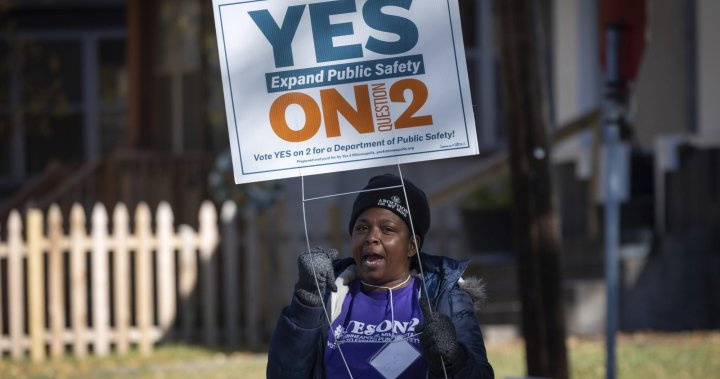 Minneapolis voters decided on Tuesday not to replace their police force with a new department that would have taken a holistic approach to crime, 18 months after the murder of George Floyd in the city sparked global protests for racial justice.

With 133 of 136 precincts reporting tallies, over 56% of voters rejected a ballot question asking residents if they wanted to create a new Department of Public Safety to take the place of the police department. The Washington Post projected that the measure would not pass.

“This proposal left us with this big vacuum of what policing and public safety should look like,” Leili Fatehi, campaign manager for All of Mpls, which campaigned against dissolving the police department, said ahead of the vote. “It’s just not something that many members of the public are comfortable with.”

Read more:
George Floyd: Rally held in Minneapolis ahead of 1-year anniversary of his death

Minneapolis was thrust to the center of the U.S. racial justice debate in May 2020 when officer Derek Chauvin pinned his knee against the neck of Floyd, a Black man, for more than nine minutes. Chauvin was sentenced in June to 22 1/2 years in prison.

Democrats, normally allies in the largely progressive Midwestern city, split over the ballot question. Many feared dissolving the department would provide easy election fodder for Republicans nationwide ahead of November 2022 congressional elections.

Opposed to the measure were Minneapolis Police Chief Medaria Arradondo; Mayor Jacob Frey, who is up for reelection on Tuesday; U.S. Senator Amy Klobuchar of Minnesota and Governor Tim Walz.

2:22
Rally held in Minneapolis ahead of anniversary of George Floyd’s death

Rally held in Minneapolis ahead of anniversary of George Floyd’s death – May 23, 2021

Some of the state’s best-known progressives — such as U.S. Representative Ilhan Omar and Minnesota Attorney General Keith Ellison, who oversaw Chauvin’s prosecution — supported the change.

Nearly all of dozens of Minneapolis residents interviewed last week said they were confused about how a new public safety department would operate, even those who supported it.

At a watch party for the Yes4Minneapolis campaign that supported replacing the police department, supporter Sandra Williams said those seeking reforms would press on.