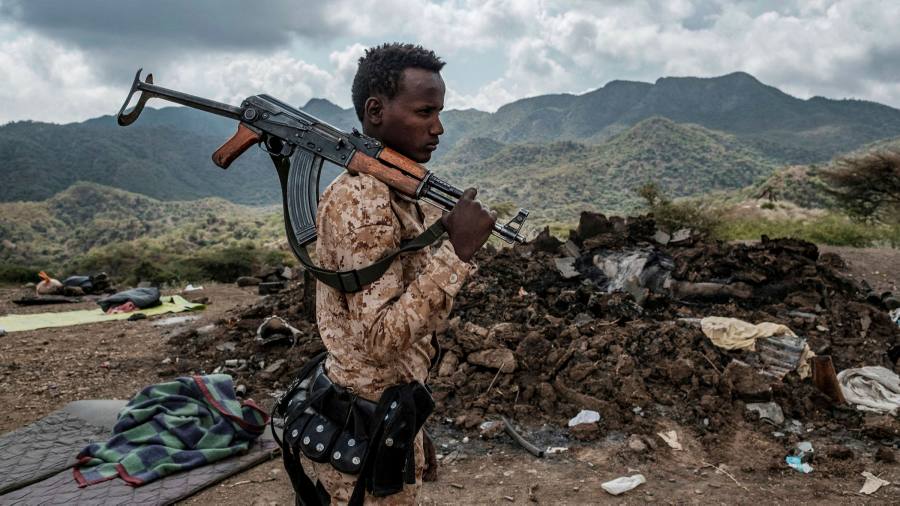 Fighters from Tigray in northern Ethiopia this week fought against pro-government troops in the neighbouring Afar region, opening a new front in the war after eight months of conflict.

Leaders of the Tigray People’s Liberation Front (TPLF), which ran Ethiopia for almost three decades and is now at war with the central government, told news agencies that Tigrayan forces were in Afar. The region is a transit point for goods from landlocked Ethiopia to the large seaport in Djibouti.

The TPLF said its aim was to repel forces from others regions, which are fighting alongside Ethiopian federal troops. With access to the northern Tigray region limited, hundreds if not thousands of people are believed to have died since the conflict began.

The expansion of the conflict beyond the borders of Tigray adds to concerns of escalation and a prolonged war.

“The Tigray army has continued its march,” Getachew Reda, a senior member of the TPLF, said in a tweet this week.

“Our conflict is not with Amhara, Afar and other oppressed people. Our quarrel is with Abiy,” he added, referring to Ethiopia’s prime minister, Abiy Ahmed, whose ruling coalition this month was declared winner of a parliamentary vote, in his first electoral test after becoming prime minister in 2018.

Bouts of violence across the country, the fighting in Tigray as well as calls for independence in Ethiopia’s northernmost region have exacerbated concerns that the war could rip apart the nation of 114m people whose ethnic cleavages are often compared to the former Yugoslavia. In recent weeks, the other nine Ethiopian regions announced they were sending forces to support the federal troops against Tigrayan fighters.

The Afar regional spokesperson, Ahmed Koloyta, told Reuters that Tigrayan fighters have taken control of parts of Afar this week, adding that the attacks have forced more than 54,000 people from their homes. Djiboutian officials told the Financial Times that the railway line and road from Djibouti to Ethiopia were still operational.

In November, Abiy sent troops to Tigray in response, he said, to the TPLF’s attack on a federal army camp. Three weeks later, the 2019 Nobel Peace winner declared victory after Ethiopian forces took the Tigray capital Mekelle, although fighting continued and many TPLF leaders escaped. In late June, in a stunning turn of events, the TPLF seized back control of Mekelle and big parts of Tigray after the government pulled back its soldiers.

In a statement on Thursday, Abiy’s office called the TPLF a “terrorist group”, and accused Tigrayan fighters of attacking an aid convoy on Sunday and of recruiting children as fighters.

“TPLF’s continued provocations directed at the Ethiopian National Defence Force, through the use of child soldiers and armed civilians, attempting to draw our forces into an altercation, need to also be strongly condemned by the international community,” the statement said.

The TPLF has denied both allegations.

In a statement posted on Sunday, Abiy referred to the TPLF “junta” as a “cancer” and invasive “weed”. “The enemy we have faced is one which is cancer to Ethiopia. The junta is perhaps the only group in history which has used the political power it has obtained to destroy its own country,” the statement said. “It is inevitable that it resists in one way or another. But surely, the junta will be removed so that it will not grow again.”

​Letter in response to this article:

Context is vital for the Tigray conflict / From Mesfin Tegenu, Executive chair of the American-Ethiopian Public Affairs Committee, Claymont, DE, US