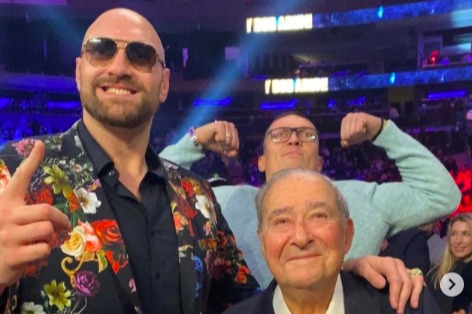 Tyson Fury and Oleksandr Usyk had a friendly face-to-face encounter in New York on Saturday.

Vasyl Lomachenko defeated Richard Commey at Madison Square Garden and Usyk made the trip to support his compatriot.

However, Fury was also in the house on the week of Bob Arum’s 90th birthday and he joined his American promoter in the arena.

While Fury was posing for pictures with Arum, Usyk took the chance to photobomb Fury and that promoted the Gypy king to turn around and embrace his fellow heavyweight champion.

The two men exchanged words briefly, though we don’t know what was said.

Earlier in the week, Fury’s trainer Sugarhill Stewart, who had Muhammad Ali’s grandson, Nico Walsh, on the card, crossed pathes with Usyk and quickly got Fury on the phone.

Fury could be heard saying: “Oleksandr the great! Tell Oleksandr, I am coming.”

Sugarhill added: “Tyson is just being Tyson. He loves the excitement and everything.”

It turned out Fury was talking literally when he meant he was coming as he ended up making the trip to New York.

It’s believed Fury wanted to explore the idea of facing Usyk for the undisputed heavyweight title next. Fury holds the WBC belt while Usyk won the WBO, WBA, IBF and IBO belts from Anthony Joshua in September.

AJ has a rematch clause that he has already exercised, so Joshua would have needed to have been paid considerable step-aside money to make that happen.

That idea seems to be dead in the water now, especially with Dillian Whyte being made Fury’s mandatory challenger for his WBC belt, too.

“Frank Warren talked to Tyson, who wants to get in the ring in February or March.

“We are talking to Whyte now to come to an arrangement to put the fight on in the UK.

“It will be a splendid fight and we are working hard to put it together.”

AJ is expected to face Usyk in the first quarter of 2022 and all being well, Fury will face Whyte not long after.