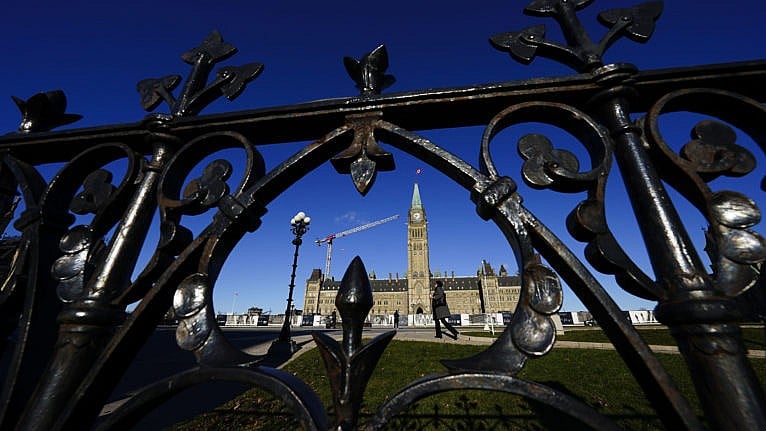 Politics Insider for Nov. 23, 2021: A Speaker is picked; David Suzuki makes a controversial speech; and jailed journalists are freed

The gang’s all back: Gone was the large Zoom screen and swaths of empty seats. The first day of Parliament’s 44th session featured a basically full house of MPs for the first time since mid-March 2020. Members and observers alike seemed happy to be back. All wore masks, and while the seating order isn’t ideal for social distancing, it cannot possibly be any worse than the classrooms millions of Canadian children have sat in for months.

The sea of returning and rookie MPs was most conspicuous in the Conservative benches, after much speculation that Parliamentary rules on COVID vaccination proof would keep some MPs out. Virtually all Conservatives were in attendance, and save for Richard Lehoux (who tested positive) the few others were away for travel or other non-COVID reasons. Aides announced that all of Erin O’Toole’s MPs were either vaccinated or had medical exemptions, though it remained unclear how many were in each camp.

This gave Government House Leader Mark Holland room to pour more salt on this Conservative wound; he noted that the odds that multiple MPs would qualify for medical exemptions is statistically “extraordinarily low,” given that only 1 in 20,000 would normally have legitimate medical reasons to not get immunized. Candice Bergen, deputy Conservative leader, said the Liberal was “disparaging the House of Commons officials and medical experts tasked with overseeing the vaccination verification process,” CTV News reported.

Duly reelected and redragged: After an election that changed so little in the House of Commons, it stood to reason that the Speakers’ election would deliver a status-quo result as well. Anthony Rota, the sixth-term Liberal MP for Nipissing–Timiskaming, was reelected in the secret preferential ballot against six MPs from various parties. It will be his second term occupying Commons’ biggest, greenest chair—and a residence known as The Farm in the Gatineau Hills—after first getting the post after the 2019 election, when he beat the incumbent Geoff Regan. After he was ceremonially dragged through the Commons by Prime Minister Justin Trudeau and Opposition Leader (he feigned going limp a few times, he sprinkled his victory speech not only with comfortable French and English, but also Italian and Ojibwa.

It will remain a mystery how the other Speaker candidates fared in their peers’ voting. Among them, Conservative MP Joël Godin and New Democrat MP Carol Hughes were unsuccessful in 2019.

Simon says: While the House of Commons had most of the fun ceremonial proceedings on Monday, the pomp and ornate hats shift Tuesday to the Senate chambers, where Gov.-Gen. Mary Simon will deliver her first throne speech at 1 p.m. This is not one with particularly high expectations around it, given the fact the Liberals’ agenda was already laid out by the party election platform. Government House Leader Mark Holland already laid out much of the Liberals’ immediate legislative priorities—bills on conversion therapy, extended pandemic benefits, 10-day paid sick leave and protecting health workers from harassment, all to be passed by the time the House calls it a calendar year on Dec. 22.

Speculation about what’s in the vice-regal address is fairly low-key—many attempts at French by Simon? Hastily added lines about the flooding disaster in B.C.?—but it’s now abundantly safe to say this will not be the Commonwealth’s worst major political speech of the week. Take a bow (and don’t fall on your face in so doing), U.K. Prime Minister Boris Johnson. From The Guardian:

Boris Johnson has been criticised by senior business leaders and Conservative MPs for a “rambling” speech to top industry figures that saw him extensively praise Peppa Pig World, compare himself to Moses and imitate the noise of an accelerating car…

He said that “the true driver of growth is not the government”, but the private sector, whose energy and originality the prime minister praised. To illustrate this, he explained: “Yesterday I went, as we all must, to Peppa Pig World. Hands up if you’ve been to Peppa Pig World! “I loved it. Peppa Pig World is very much my kind of place. It has very safe streets, discipline in schools, heavy emphasis on new mass transit systems. Even if they’re a bit stereotypical about Daddy Pig.”

Johnson also imitated the sound of an accelerating car with grunts that the official Downing Street release transcribed as “arum arum aaaaaaaaag”.

Manitoba also has a throne speech Tuesday, the governmental reset by newly minted Premier Heather Stefanson, sworn in two weeks ago to replace Tory Brian Pallister. And don’tcha know, vaccination rules are also causing stress in the legislative chambers over in Winnipeg.

Build back or bust: The landslides and floods in British Columbia have soundly discredited the false dichotomies: the greens versus the bean counters, safety of the planet versus Canadians’ pocketbooks, writes Rick Smith of the Canadian Institute for Climate Choices. This climate disaster has been an economic disaster to supply chains and businesses. Smith observes in Maclean’s:

It’s clear from looking at the washed-out highways and rail lines in B.C. that we need a huge investment in climate-resilient infrastructure. B.C.’s current crisis shows that such investment is the most cost-effective way to protect the services that people and businesses depend on. Canada already has an infrastructure deficit, with governments, utilities, businesses and homeowners already struggling to keep what already exists in good condition; we need to ensure that this deficit is addressed with future-fit, low-carbon infrastructure that builds for the climate of today and tomorrow.

Speaking of climate change, Environment Minister Steven Guilbeault delivered his own report from COP26 in Canada’s National Observer. It was his 19th climate summit; the previous ones he attended as a climate activist. You’ll be no doubt shocked to hear how proud he is of what Canada’s doing now. While he insists this isn’t time for victory laps, it does appear time for back-patting: “Amid the ups and downs of summit diplomacy, one thing stood out that I wasn’t fully prepared for in Glasgow. Inside those negotiating rooms, and behind the closed doors of my bilateral meetings, I heard a genuine appreciation and respect for the constructive role Canada is playing in the climate fight.”

Far, far, from inside the corridors of environmental decision-making, David Suzuki raised the spectre of violent destruction by activists  if politicians don’t act. “We’re in deep, deep doo-doo,” the legendary environmentalist told an Extinction Rebellion protest on Vancouver Island this weekend. “This what we’re come to, the next stage after this, there are going to be pipelines blown up if our leaders don’t pay attention to what’s going on.”

Suzuki later said he doesn’t support bombing pipelines—“of course not,” he told National Post’s Tyler Dawson—but did say few other options remain for those who feel government isn’t moving rapidly enough. Alberta Premier Jason Kenney was quick to condemn Suzuki’s remark as “dangerous,” and Environment Minister Jason Nixon blasted him for preaching ecoterrorism. More neutrally, B.C. Public Safety Minister Mike Farnworth said “statements like that are not helpful,” particularly during so much displacement due to this natural (though climate-change-induced) catastrophe.

Journalists out of jail: It’s unseemly for journalists to spend three nights in jail for doing their jobs, but at least photojournalist Amber Bracken and Michael Toledano don’t get more, at least for now. On Monday, a B.C. judge released them both on bail after their arrests Friday in an RCMP raid along with 13 others while they were chronicling protests of the Coastal GasLink natural gas pipeline that would run through unceded Wet’suwet’en territory. They were released on conditions, including an order to abide by the pipeline company’s injunction limiting access to the pipeline construction site. The journalists remain charged, with Bracken’s hearing set for February.