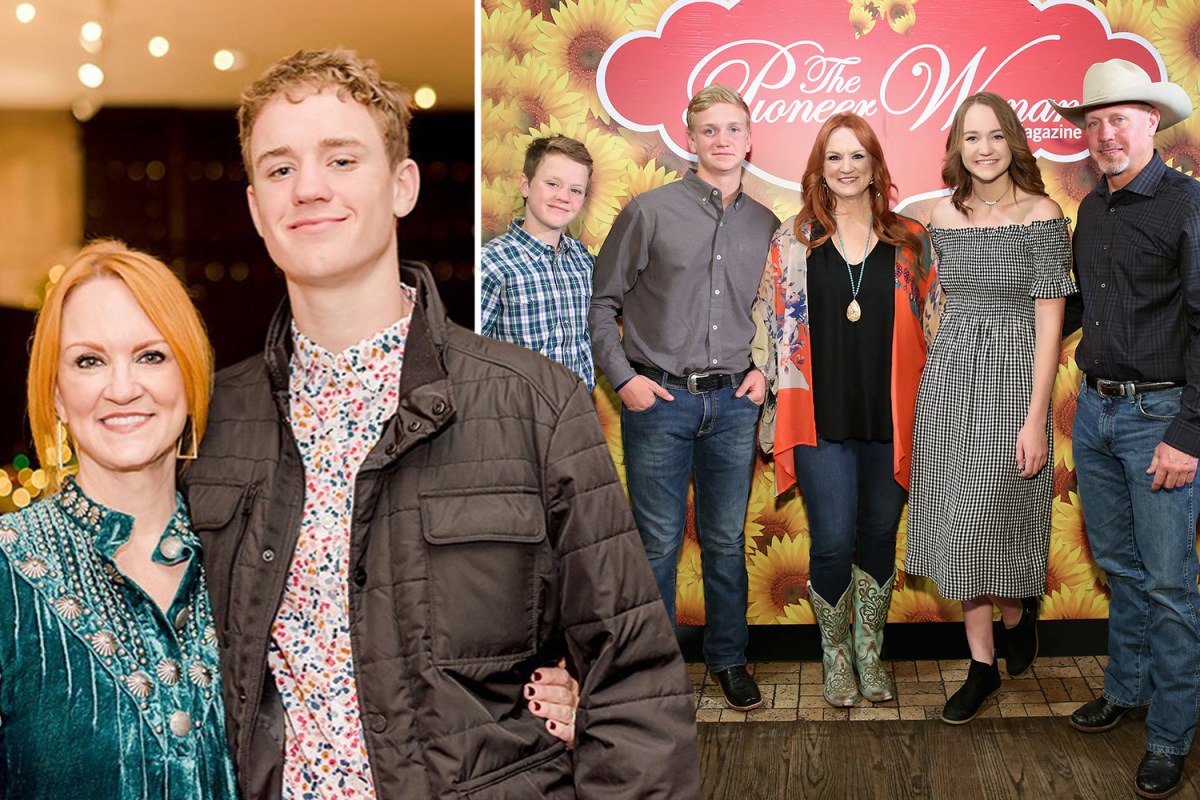 REE Drummond may be extra busy this holiday season cooking to feed her football playing son Todd, who towers over his mom in a rare recent photo.

The Pioneer Woman shared a sweet snap on Instagram of herself wrapped in her son’s arms, both with ear-to-ear smiles.

She captioned the pic: “Todd! My youngest kid, my favorite high school quarterback, and basically one of my favorite people on earth. He’s a gift!”

The 52-year-old said she “just wanted to share a few things about this dude” and continued.

“He’s very tall. He likes funny t-shirts, I get him three or four every Christmas. He’s got a canon for an arm. He’s a lifelong Marvel fan. And he likes downtime…finally, a child who’s aligned with my extroverted introversion.”

But fans couldn’t stop pointing out how tall the 17-year-old has gotten.

One person noted: “Tall son hugs are the best hugs.”

While another joked: “Ree!! Your baby is like 12 feet tall. What happened?!?”

A third lovingly said: “My goodness how tall he has grown since we first saw on Pioneer Woman, no matter how tall, or old he is, he will always be your baby boy.”

And one person likened Todd to his older brothers and sisters: “Todd ending up being the tallest of the bunch makes my heart soar.”

The happy photo is a welcome change from the tragedies this year has brought Ree and her family.

The Food Network star paid devastating tribute to her late sibling on Facebook, while sharing a slew of old and recent photos of them together.

She wrote: “It isn’t possible to sum up the life of someone as perfectly wonderful as my brother Michael, so right now I won’t try.

“He was seventeen months older than me, my first friend and buddy, and I’m so grateful for over 50 years of photos and memories.

“Please pray for my parents, whose devotion to Mike was boundless, and who will feel this loss most acutely. Michael Smith, you were everything.”

Sadly, that wasn’t the only tragic event the Pioneer Woman has endured in recent years.

From her husband Ladd’s horrific truck crash to her daughter Paige’s arrest, the 52-year-old TV chef has been through plenty of heartache.

Back in March, Ree’s husband Ladd and their nephew Caleb being involved in a terrifying car crash.

The incident occurred at the family’s ranch in Oklahoma as Caleb and Ladd battled a grass fire on the property.

First responders said the crash happened as Ladd was traveling northbound and Caleb was driving southbound, as neither had visibility due to high winds.

Law enforcement said the hard impact ejected Ree’s nephew 70 feet from the truck and he was rushed to hospital in critical condition.

Ladd broke his neck and had to wear a brace, while Caleb, 21, suffered a few broken ribs and a severe concussion.

Ree said on her blog at the time: “Rather than wish the accident didn’t happen, I’m gonna live in a state of gratitude – not just for the guys being okay, but also for the love, kindness, and prayers of so many of you.”

A month after the crash, Caleb was arrested for a DWI after cops said he was ‘tipsy’ and ‘fast asleep’ in his car, according to TMZ.

The 21-year-old was reportedly sleeping in his car behind the wheel when police arrived and allegedly didn’t respond when they knocked on his window twice.

His blood alcohol level was .05, with two misdemeanor charges – driving while impaired and driving with an open container.

He finally woke up, having fallen asleep with his foot on the brake and his car still in drive, according to the outlet.

He accidentally put the car in reverse when told to get out of the car and had ‘red bloodshot eyes and ‘thick slurred speech’ when he exited.

Paige, then 19, was arrested for public intoxication and possession of alcohol under the age of 21.

She was “in a drunken condition” when she was arrested, Radar Online reported.

The student paid more than $400 in court fees and her request to dismiss both charges was approved.

And the most recent bad news is that Ree could soon be out of a job, as rumor has it that the Pioneer Woman’s TV show might be canceled.

The Pioneer Woman has run for 29 full seasons so far and has a multi-year contract with The Food Network – which is a hopeful indicator of more seasons to come.

The show’s 29th season had a total of 13 episodes, all listed on The Food Network website, and ended in November 2021.

According to Premiere Date, Drummond’s Season 31 is yet to be announced by The Food Network.