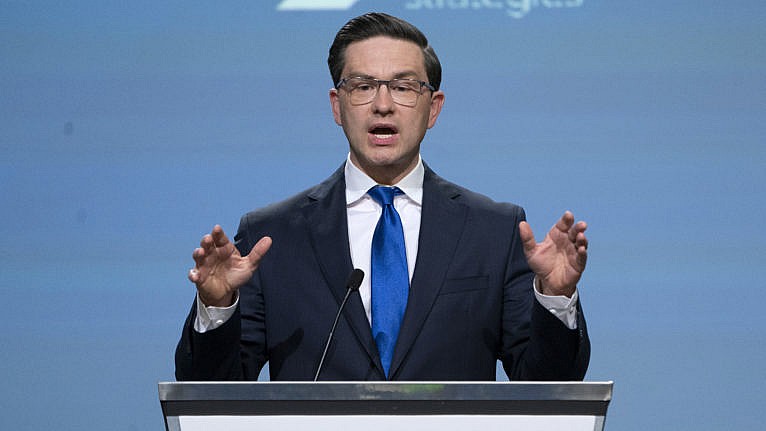 Politics Insider for May 17: Poilievre talks to Jordan Peterson; Kim Campbell criticizes the CPC leadership candidates; Steven Del Duca fights for his seat in the legislature

Pierre Poilievre denounced the “white replacement theory” behind the Buffalo mass shooting as “ugly and disgusting hate-mongering” on Monday, CBC reports, after being challenged by leadership rival Patrick Brown: “I condemn the attack in Buffalo and the ugly racist hatred that motivated it. Any and all racism is evil and must be stopped. I also denounce the so-called ‘white replacement theory’ as ugly and disgusting hate-mongering. I also condemn Pat King and his ugly remarks.” He also denounced Brown as “sleazy” for using the attack against him.

Didn’t denounce mob: In the Globe, Gary Mason writes that it’s shameful that Poilievre and other Conservatives remained silent about the nasty recent mobbing of Jagmeet Singh in Peterborough, Ont.

Talking to Peterson: Also on Monday, Poilievre told Jordan Peterson he is consulting legal scholars to find a way to keep the Emergencies Act from being abused for political purposes, the Post reports. In a 1.5-hour conversation with the world-famous former professor, Poilievre called Justin Trudeau an egomaniac, and compared him to French king Louis XIV.

Rapid response: The Citizen has a digital round table featuring rapid reaction from savvy observers.

PCs ahead: In a poll from Abacus conducted before the debate, Doug Ford’s Tories appeared to have a comfortable lead.

Tough spot: Steven Del Duca is in a battle just to win a seat in the legislature, the Star reports.

Justice sought: Three senators released a report Monday calling for exoneration for 12 Indigenous women, who they say have endured a pattern of discrimination, inequality and violence within the criminal justice system, the Globe reports.

China committee back: Opposition parties voted Monday voted to revive the high-profile special committee studying Canada’s ties with China, Global reports, over the objections of the Liberals. The committee will be tasked with studying “all aspects of the Canada-People’s Republic of China relationship including but not limited to diplomatic, consular, legal, security and economic relations.”

Statue to go: The Terry Fox statue on Parliament Hill is to be moved to make room for a new building, CP reports.

Correction: Economists are predicting that Canadian home prices will fall as much as 20 per cent this year as higher interest rates hit the real estate market, the Globe reports.

Kenney in DC: Jason Kenney says he doesn’t need overwhelming support in a leadership review because the pool of voters has been diluted by thousands of angry members bent on destruction, CP reports. Kenney spoke from Washington, where he is to testify before a Senate committee to discuss the North American energy situation.

Murdered: The Taliban shot and killed an Afghan man over the weekend who was urgently seeking refugee protection from Canada, the Globe reports. Canada committed to resettling 40,000 Afghan refugees but thousands are still stuck overseas because of bureaucratic red tape, advocates say.

Editor’s note: The newsletter will take a one-day break tomorrow.

Get the best of Maclean‘s sent straight to your inbox. Sign up for news, commentary and analysis.