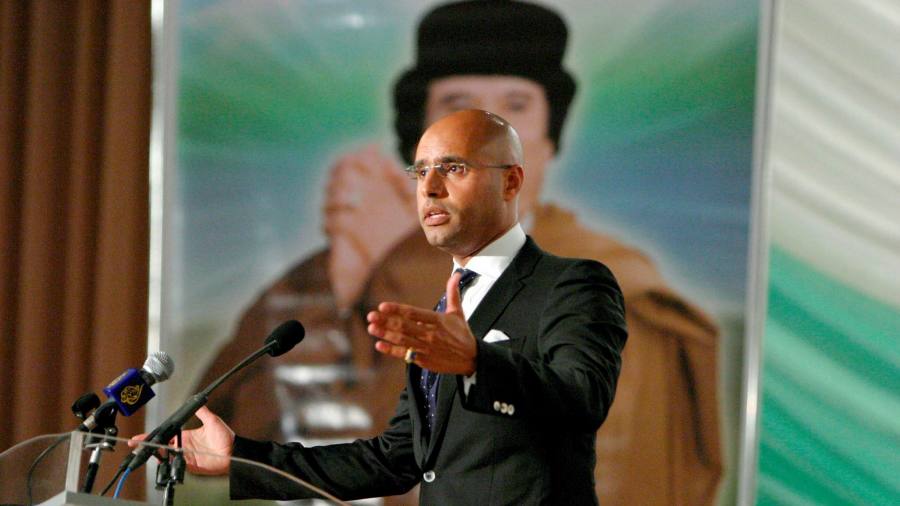 In the days when he was considered a reformer, Saif al Islam Gaddafi, the son of the despotic Libyan leader Muammer Gaddafi, famously said that his people should enjoy the same level of freedoms as the Dutch.

But long gone is the image of the modernising prince-in-waiting. Gaddafi, who said this week he wanted to run for president of Libya, is sought by the International Criminal Court for alleged crimes against humanity during the 2011 rebellion against his father. In the early days of the uprising, he brandished a machine gun and vowed to crush the “riff raff”.

In his first public appearance in years, Gaddafi, 49, on Sunday submitted his candidacy papers for the presidency in the southern town of Sebha. In a statement this week, he invited “all those who share my dream of saving Libya from internal wars and chaos and restoring stability, peace, prosperity, brotherly coexistence and civil peace . . . to flock to the electoral process”.

Despite a surname toxic to many Libyans, analysts say it would be wrong to dismiss his chances in the December 24 poll, the first since the 2014 election that sparked a war. “It is hard to say if Saif would win,” said Claudia Gazzini, senior analyst at the International Crisis Group.

“But there is a big chunk of disaffected youth who would probably vote for him because they would say he is one of the few people who have not been part of the mess of the past years. They would also say that his warnings during the uprising that Libya would be divided and tribes would turn against each other have turned out to be true.”

Since the toppling of his father, who was killed by rebels, Libya has been fragmented, with two, or even sometimes three, governments vying for power. A ceasefire between the forces of Khalifa Haftar, the renegade general backed by the United Arab Emirates and Russia, and an alliance of militias in western Libya backed by Turkey, has held for more than a year. In February, a government of national unity was installed in Tripoli, the capital in western Libya, after a UN-sponsored dialogue.

The UN and western governments are pushing for the December election as a way of uniting Libya and endowing it with a legitimate government that can disarm militias, restore order and energise the economy. The electoral commission has yet to decide which candidates qualify and the poll remains uncertain.

Many Libyans are nostalgic for a past when the country was stable, united and prosperous even if under the repressive rule of Muammer Gaddafi, analysts say, and Gaddafi may be able to capitalise on this.

He had spent six of the past ten years as a captive held by a militia from Zintan, a town in northwestern Libya. Since his release in 2017, he has met several communities from around Libya, though it remains unclear what political message he had, if any.

“This has been Libya’s best-kept secret,” said Mohamed Dorda, director of Libya Desk, a research and consulting company. “Dozens of people have been visiting him regularly, but there appears to have been an unspoken agreement not to discuss it publicly. There have been pictures of 200 people sitting in a tent with Saif, but no videos and no rumours have emerged. Many of the Libyans I see here in Tunisia tell me I met Saif last week.”

Gaddafi has a constituency among Libyan tribal groups in central and southern Libya, analysts say, though they argue the votes of the “greens” — a reference to those who supported the older Gaddafi, are likely to be split among several figures from the ousted regime. These include Bashir Saleh, a former Gaddafi aide and financier. Haftar has also submitted his candidacy.

The welcome expressed for Gaddafi’s candidacy in some places will enhance his status as a power broker, said Dorda, even though there has been angry reaction in parts of western Libya, that are strongholds of anti Gaddafi militias.

A US spokesman told Al Jazeera television that Washington had no position on Gaddafi’s candidacy, but given that he was wanted by the ICC, Libyans should ask themselves who was the “best person” to represent them to the international community. Russia, which opposed the overthrow of his father, favours a role for Gaddafi in Libyan politics to safeguard its interests. “Russia would be in a preferential position,” said Gazzini.

She noted, however, that it was precisely Gaddafi’s history as a proponent of reforms, even if those were limited and superficial, that was likely to deprive him of the support of hardliners of the Gaddafi regime.

His efforts helped soften the image of Gaddafi’s brutal regime in western capitals which proved eager to gain access to Libya’s oil riches after years of sanctions and ostracism. He was also the driving force behind Libya’s international rehabilitation, helping negotiate compensation for the victims of the bombing of a Pan Am airliner over Lockerbie in Scotland in 1988 for which a Libyan agent was convicted in 2001 by a Scottish court.

In a regime where no dissent was allowed, Gaddafi voiced criticism of the government and called for a constitution and respect for human rights. He oversaw in 2010 the release of about 200 imprisoned Islamic militants many of whom had been kept behind bars after their sentences expired.

“Hard core regime people [are not likely to support him]. They don’t see him as a personification of the old regime,” said Gazzini. “They see him as a bit of a traitor and blame him for releasing the militants who played a role in the uprising. But if he is allowed to run and war does not break out he has a good chance of attracting the vote of many disaffected youths.”