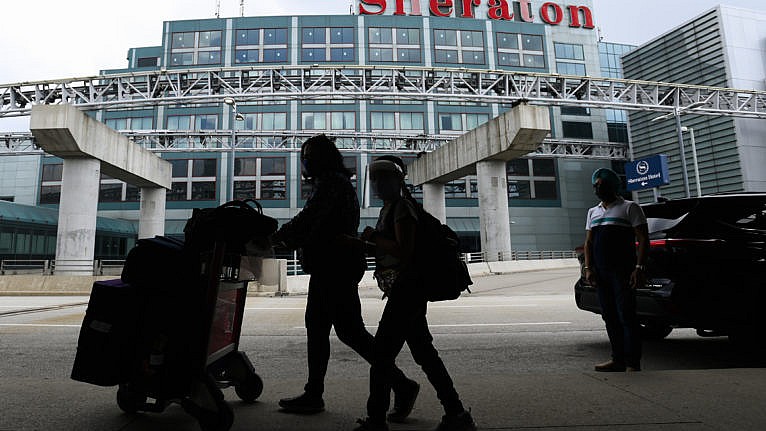 Politics Insider for Dec 10, 2021: Public health flubs; Canada is taking the back seat in Ukraine; and Marc Miller takes a stand against Bill 21

A report from the auditor general on Thursday revealed that the Public Health Agency of Canada struggled to keep track of whether travellers ordered to stay in quarantine hotels actually did so, CBC reports. The agency also failed to inform some people that they had COVID-19.

PHAC only had records to verify hotel stays for about a quarter of air travellers for the February to June 2021 period.

“Because the agency did not have records of stay for 75 per cent of travellers who flew into Canada, it did not know whether those who were required to quarantine at government authorized hotels had complied,” said (Auditor General Karen) Hogan. “In addition, the agency did not reliably track whether air travellers who had been notified of positive COVID-19 tests had stayed at a government-authorized hotel as required.”

Einstein at the airport: In La Presse, Paul Journet reviews (translation) Canada’s current travel rules and concludes that while you don’t have to be Einstein to understand them, it’s not easy. The big picture: it’s hard to have faith in the people running the system.

At the start of the pandemic, the federal government was accused of not doing enough. Now it is criticized for being too harsh. In fact, there has been one constant from the start: No matter what is required in theory, it varies in practice, for unexplained and unjustifiable reasons. It is through these holes that the virus sneaks in. And this is what should above all be denounced.

Migrants abandoned: Another report from the AG on Thursday found that the federal government failed to protect migrant workers from the spread of COVID-19, despite repeated warnings, the Globe reports. Quarantine inspections were found to be “inadequate.”

Workplaces were almost unanimously deemed “compliant,” despite inspectors gathering little or no evidence, the report says. Even after the government was informed of these problems and given an opportunity to remedy them – and long after Prime Minister Justin Trudeau vowed to better protect workers – matters only worsened: 88 per cent of inspections from 2021 were deemed inadequate, according to the report.

Absent Canada: In Maclean’s, Justin Ling writes that Canada is taking a back seat in the international coalition supporting Ukraine against Russian aggression.

When President Joe Biden got off a video call with his Russian counterpart on Tuesday, he started working the phones: Paris, Berlin, Rome, and London were all on his call sheet. He was building a unified front of countries looking to send a strong signal to Russia that an incursion into Ukraine would come with dire consequences. Ottawa was conspicuously not on his list. It’s an awkward omission.

Mr. Dithers redux: At CTV, Don Martin takes note of a number of files where the Trudeau government seems to be dragging its feet and writes that it has “elevated foot-dragging to a dark political art.”

Either way, it’s a strange behaviour for a third-term prime minister, whose staff should’ve figured out how to fire up the engines of government and hit the accelerator by now without months of pointless pondering and delay. It was, after all, Trudeau who framed this mandate as vital to resolving key files such as Indigenous reconciliation, climate change, pandemic readiness and restoring Canada’s place on the world stage. But the prime minister’s excessively controlling staff, who are apparently loath to delegate action beyond their tiny circle of love, have logjammed the entire government inside a decision-making funnel, which is clearly many sizes too small.

Cowardly: Crown-Indigenous Relations Minister Marc Miller spoke out Thursday about a Quebec teacher who was removed from the classroom because she wears a hijab, which is forbidden under Quebec’s secularism law: “It’s cowardly. This type of discrimination isn’t reflective of the Quebec society I want to live in.”

Global has a roundup of political reaction.

Miller pointed out that under Bill 21, International Development Minister Harjit Sajjan “couldn’t teach music class in Quebec, because of the turban that he wears on his head. He shouldn’t, because he’s a lousy musician, but that’s the only reason he should be excluded from teaching, frankly…it’s disheartening and it’s picking on someone vulnerable.”

CTV leads with the more muted reaction of Erin O’Toole, who said he opposes the law, but considers it a matter for Quebec.

Numbered days: In L’actualité, Chantal Hebert writes that (translation) O’Toole, who is struggling to remain as leader of his party, may face a choice between slow death or summary execution. She points that recent history shows that the seat belonging to the opposition leader seems to be equipped with an ejection seat.

Over the past few years, Stéphane Dion, Stockwell Day, Michael Ignatieff, Thomas Mulcair and Andrew Scheer have all wanted a second chance to lead their party to power. Only Stephen Harper got it, mostly because he had just managed to end a years-long split between the Progressive Conservative and Reform wings of the Conservative movement.

UCPers to vote: Speaking of Conservative leaders in trouble, Jason Kenney will face a leadership review in April in Red Deer, which Don Braid writing in the Calgary Herald, gives him good chances of surviving.

Kenney has every chance of scoring a big win at this one. Floor conventions where attendance can be stacked are his natural habitat.

Passports to stay: Ontario will announce today it is dropping its tentative plan to end the provincial vaccine passport program in mid-January, CBC reports.

Test roundup: CBC has a good roundup of how different provinces are distributing rapid tests to their citizens, something some are doing better than others.

Evokes Omicron: Chrystia Freeland said at committee on Thursday that MPs should approve $7.4 billion in pandemic aid because of renewed COVID-19 uncertainty, CP reports. “Recent developments related to the Omicron variant serve as a reminder that the fight against COVID is not yet over and they underscore the importance of the key aspects of bill C-2,” Freeland said in her opening remarks to the committee.

Private surgery: Saskatchewan says it plans to reduce its COVID-related backlog of surgeries by privatizing some procedures, CP reports.