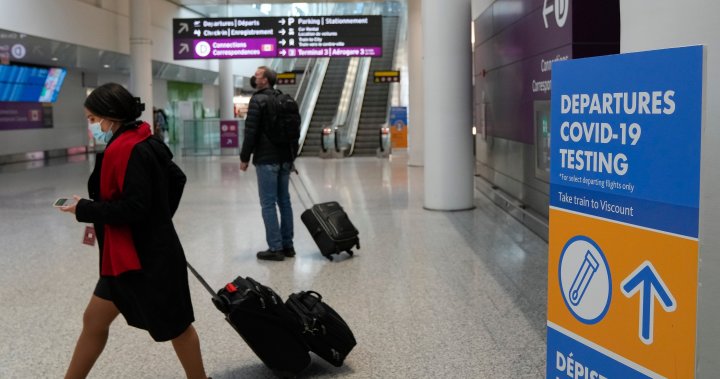 Prime Minister Justin Trudeau has consulted the premiers on additional border and travel measures that could help slow the community spreading of COVID-19.

In a call late Tuesday the first ministers discussed the COVID-19 Omicron variant of concern, which is rapidly spreading around the world.

In a readout of the call, the PMO says the leaders noted the potential for a rapid and strong resurgence of COVID-19 cases in Canada that could put a strain on health-care systems.

The readout says Trudeau and the premiers agreed that the key to moving beyond the pandemic is to ensure that as many Canadians as possible, including children, get vaccinated and have access to booster shots.

There were no details on whether the government plans to change any travel restrictions, including the ones on 10 African countries that were put in place when the Omicron variant of the novel coronavirus was first discovered.

The highly transmissible strain has been confirmed in more than 60 countries — including Canada — as well as 30 U.S. states.

The readout says the prime minister recognized that this new surge in cases would be particularly difficult for families and communities given the time of year.

Government House leader Mark Holland announced that the Liberals will “greatly reduce” the number of their MPs in the chamber and intend to hold entirely virtual caucus meetings for the time being.

A New Democrat spokesperson said that party’s weekly caucus meeting Wednesday will be virtual, however, officials with both the Bloc Quebecois and the Conservatives say their caucuses will meet in person.

Liberals limiting MPs in House of Commons due to Omicron spread

P.E.I.’s chief public health officer, Dr. Heather Morrison, said starting on Friday, people arriving on the Island will be required to isolate until they receive the results of a negative COVID-19 test. New restrictions on private indoor gatherings will come into effect, limiting the number of people to 20.

Ontario is increasing COVID-19 testing in long-term care homes, as well as tightening restrictions on visitors and resident activities due to concerns about the Omicron variant.

Quebec is asking employers to favour working from home as COVID-19 case numbers remain high and hospitalizations rise. The province is also looking to increase the pace of booster shots, and make rapid COVID-19 tests available to the entire population.