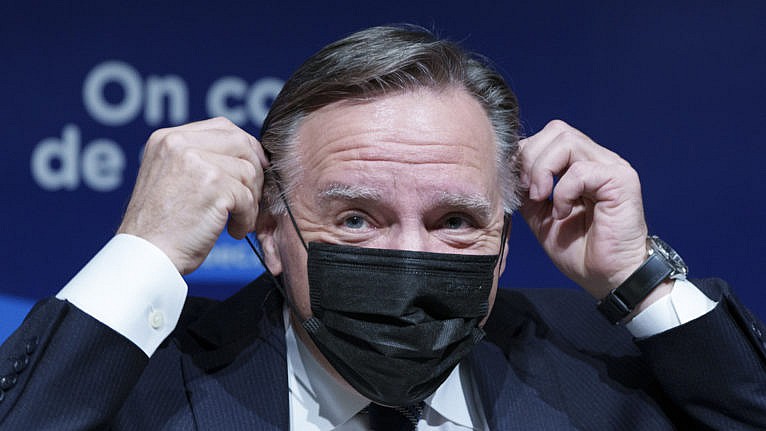 Restrictions: With at least 3,700 new cases expected to be announced on Friday, the Quebec government announced Thursday a series of renewed restrictions including reduced capacity at businesses, bars and restaurants and a delayed return to classes for secondary and post-secondary students, CTV Montreal reports.

Because of the record-breaking numbers, “we must act,” Quebec Premier François Legault said Thursday, announcing a slew of public health rules the province is tightening as of Monday. Getting vaccinated is key, he said, but “the second weapon that we have is simple: we have… to be close to other people less often.” The province has a goal of reducing contacts by 50 per cent, he said. That means halving capacity wherever possible across the province.

Minister positive: Among those caught up in the scary surge of new cases in Quebec is the education minister, Le Journal de Montréal reports.

Circuit breaker: The Ontario COVID-19 Science Table warned Thursday the province could see 10,000 cases a day as Omicron takes over, and experts say a “circuit breaker” could help avoid the worst, the Globe reports.

These spiking new cases could overwhelm hospitals in January, the science table warns, without intervention now – even with uncertainty about the severity of the disease caused by the new variant. “Waiting to take action means waiting until it is too late to take action,” said Adalsteinn (Steini) Brown, head of the science table and dean of the University of Toronto’s public health school. The numbers, released a day after the government of Premier Doug Ford announced accelerated booster shots and new capacity limits for large sports and theatre venues, say Omicron is spreading so quickly it will be Ontario’s dominant variant by the end of this week.

Common sense? CTV snowbird Don Martin, who returned to Canada from the United States last week, describes an unpleasant airport scene, but overall thinks that something like a common sense evolution is taking place.

We’re mercifully pivoting back to the initial goal when the rallying cry was to “flatten the curve” in order to keep empty beds in ICUs instead of chasing rainbow fantasies that this insidious virus can be exterminated by washing your vegetables. So here’s hoping the feds embrace realistic responsibilities in this fourth – or is it fifth? – COVID-19 wave: Secure the kid doses and adult boosters, get millions of rapid testing kits into provincial hands and keep the economy flowing through a border as immune as possible to variant invasions.

Regrets: Trudeau told Global in an end-of-year interview that the “top levels of the military” told his government there was “no problem” when it came to the misconduct scandal that has shaken the Canadian Armed Forces. Trudeau said he wishes “he could have done more.”

Child killed: Global has a tragic story about a 10-year-old girl who was shot dead in Afghanistan while her family was preparing to flee to Canada.

The girl, Nazifa, was killed when gunfire erupted near a Taliban checkpoint in Kandahar on the night of Dec. 10, her father and the Canadian veterans group Aman Lara told Global News in interviews. The father had worked for the Canadian military in Kandahar until 2011. The family was approved for resettlement by Canada, but was stuck in Afghanistan due to the lack of evacuation efforts.

Teneycke vs. McVety: Ontario PC Party campaign director Kory Teneycke has slapped Premier Doug Ford’s former ally Charles McVety with a lawsuit, Queens Park Today reports. Teneycke and his lobbying firm, Rubicon Strategy, are suing McVety for defamation, alleging the outspoken evangelist has tried to impugn his integrity. “Mr. McVety is about to learn that defamation can be very expensive,” Teneycke said in a text. McVety had no comment.

Ships costly: A report from parliamentary budget officer Yves Giroux Thursday estimates Ottawa’s decision to build two new polar icebreakers for the Canadian Coast Guard will cost $7.25 billion, a dramatic increase over the government’s 2013 estimate that it would cost $1.3 billion to build one such vessel, CP reports.

Potato drama: P.E.I. Premier Dennis King says Ottawa should cut the “silly BS” and do more to end the ban on Island potato exports to the United States, CBC reports.

Publication note: MPs wrapped things up Thursday for a holiday break, and so, too, is your correspondent. The newsletter will be back in your inbox in two weeks. We wish you a joyful solstice season!