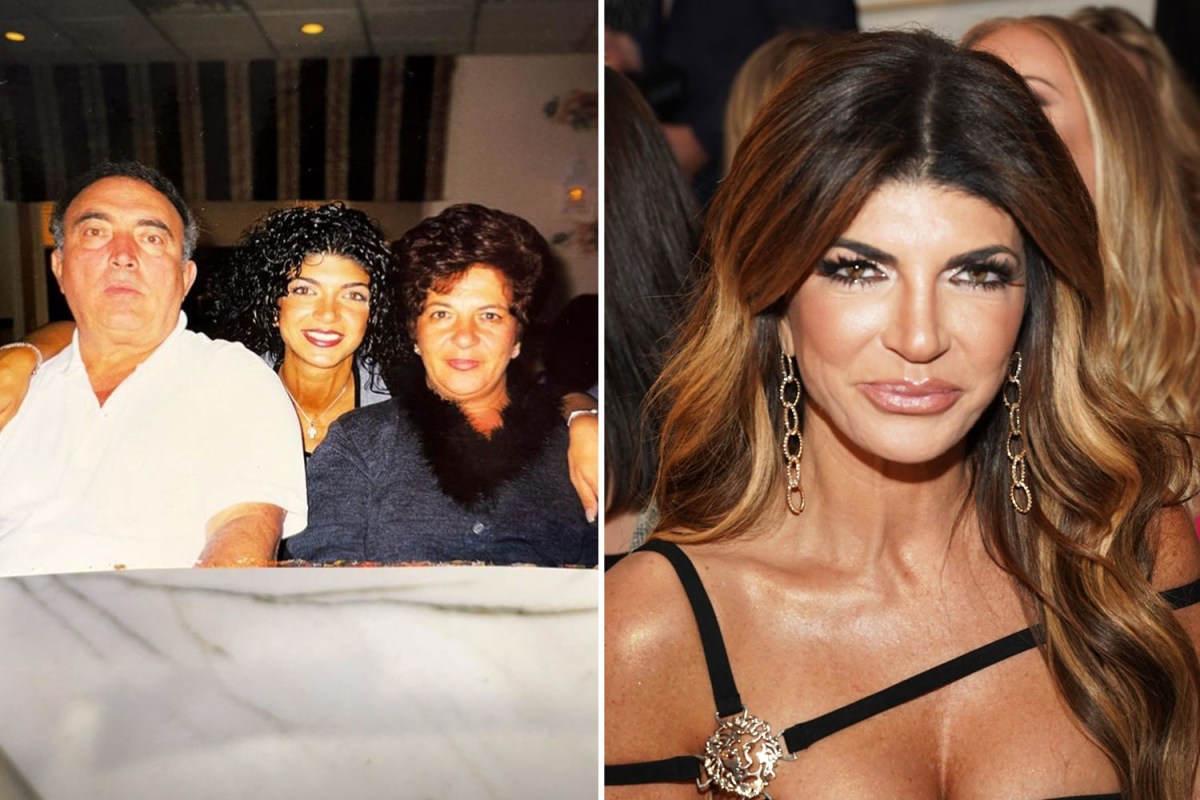 RHONJ’S Teresa Giudice looked unrecognizable in a throwback photo with her late parents after she admitted to getting a nose job and as rumors circulated that she had “lip fillers.”

The Bravo star confessed to the procedure earlier this month during an appearance at a New Jersey event.

The 49-year-old shared an old pic to her Instagram Stories of her with her parents while dining out together, showcasing the star’s transformation over the years.

Teresa crouched down between her mother and father to pose for the camera showing off her tight dark curls.

She captioned the sentimental moment “I miss them both so much” along with double heart emojis.

The reality star’s father passed away in April 2020, three years after his wife and Teresa’s mom died in 2017.

The touching post pointed out how much the TV star’s appearance has changed since she recently confessed to going under the knife.

While appearing as the keynote speaker at the New Jersey Ultimate Women’s Expo at the NJ Convention & Expo Center on Sunday, November 7, the Ultimate Girl’s Trip star revealed her recent surgery.

“I don’t know if anybody knows, but I did get the tip of my nose done and I was so nervous about getting it. So I guess I got a nose job — the tip of it — and I used Dr. Tobias in Englewood, [New Jersey]. He was amazing.

“After I got it done, I didn’t feel [any] pain whatsoever,” she added.

The author praised her fiance Luis Reulas for his support in her decision, telling the audience: “I asked Louie, I’m, like, ‘Babe, should I get my nose done?’ And he’s like, ’Is it going to make you feel better?’ And I said, ’Yes.’ So he said, ‘Do it,’”

Teresa again gushed about her soon-to-be-husband recalling to the crowd: “But then I asked Louie and he’s like, ‘Babe if it’s going to make you feel better, do it.’ And after I did it, it made me feel better.”

Teresa’s decision may have been influenced by her eldest daughter who admitted to getting a nose job last summer.

The same doctor also performed the 20-year-old’s procedure as well.

In a photo alongside her TV star mother, Gia confirmed: “Yes I got a nose job.”

She wrote: “I am an adult now, this has been an insecurity of mine for a while and I’ve never been happier and so comfortable in my own skin!!”

The young star added that she was “absolutely in love” with her new nose.

Teresa commented on her daughter’s revelation: “Couldn’t be more proud of you,” she wrote. “You are beautiful inside and out. Love you to infinity and beyond.”

In recent days, fans have had suspicions that the mom-of-four got lip fillers as well since opening up about her surgery to alter her nose.

Teresa shared a photo of herself via Instagram Stories to promote Orca Martini glasses putting her new nose and seemingly fuller lips on full display.

While she hasn’t addressed her plumped-up lips, fans seem certain she had them done as well.

Teresa’s followers were quick to point out her new look in a selfie she posted to promote her appearance on Watch What Happens Live With Andy Cohen on Wednesday.

Another chimed in: “The lips are starting to look weird…”

The internet has had plenty to say about Teresa’s looks as of late.

Recently rumors swirled that she may be pregnant after she posted a photo of herself posing with her beau, who was resting his hand on her belly.

Before that, Teresa was bashed for an outfit she wore while celebrating her recent engagement.

Fans called the black and white look “tacky” and joked it looked like something her daughter should be wearing.

And just days ago, social media users criticized another fashion choice of hers after she sported a topknot high on her head while celebrating a friend’s birthday.

Several people made their opinions known with one commenting: “Not a fan of this hair,” and added, “weird.”