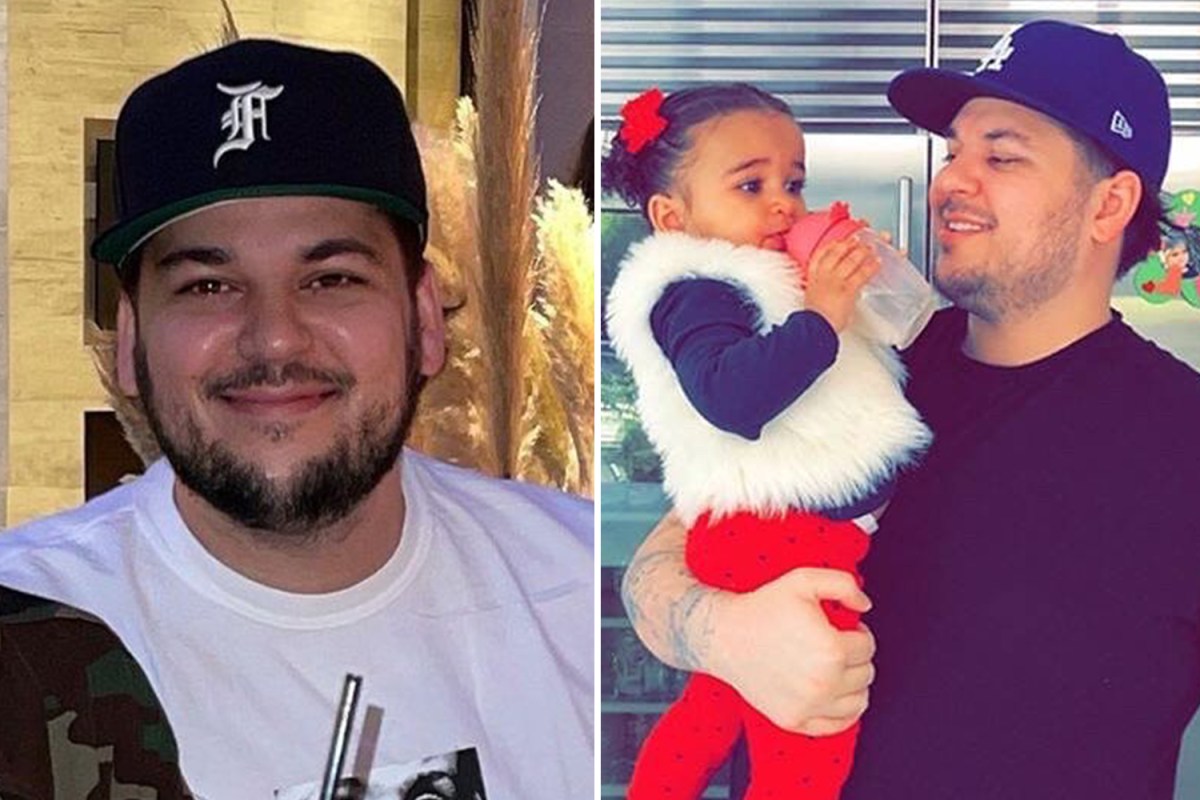 ROB Kardashian posed in a rare photo with his daughter Dream, 5, at her Barbie-themed birthday party in Kris Jenner’s $4M Calabasas mega-mansion.

Blac Chyna, Dream’s mother, was snubbed as she was not invited to the lavish birthday party which took place days after the Astroworld tragedy.

Rob, 34, has stayed out of the Kardashian spotlight since his brief appearances in the first few seasons of the popular reality television show.

Although since his recent weight loss transformation, fans have begun to see Dream’s dad in more public appearances.

In the sweet photo Rob shared to his Instagram feed, the Kardashian dad held Dream on his shoulders as he stood in Kris Jenner’s massive foyer decked out in pink balloons to blend with the Barbie theme.

Even though the entire Kardashian clan has been under relentless fire from fans and slammed as “insensitive” for posts amid the Astroworld tragedy, fans seem to have set their differences aside for the five-year-old’s birthday celebration.

Comments came in from fans wishing Dream a happy birthday along with remarks on how adorable the father and daughter pair look.

Last year on Dream’s fourth birthday celebration, her mother Blac Chyna was also left off of the guest list, as the ex couple had been caught up in a custody battle.

She indirectly claimed that Rob nor her seven-year-old son’s father Tyga, 30, give her child support.

A month earlier, Kylie Jenner and Rob sued Chyna for battery after alleging she tried to choke him with a phone cord.

New details of the alleged 2016 assault against Rob by then-girlfriend Chyna emerged earlier in 2020 and alleged that she was under the influence of cocaine and attacked him with a six-foot metal pole.

According to documents seen by The Blast, Rob claimed to have “believed that Chyna intended to inflict severe injury on him and feared for his life.”

After a years-long court war, the couple now “shares custody” of Dream.

The agreement was reaching in December of 2020.

Us Weekly reported on Monday that Rob and Chyna reached a new agreement “without court intervention,” which was filed on December 8 of last year.

According to legal documents obtained by the outlet, the the former pair will share physical custody of Dream based on an alternating weekly schedule.

Fans have been ripping the Kardashian family since some of the reality stars have failed to acknowledge the nine deaths at Travis Scott’s Astroworld music festival in their recent social media posts.

Travis Scott, 30, Kylie’s baby daddy, performed at the Texas music festival while the pregnant 24-year-old was in the audience with their daughter Stormi, 3, before the crowd violently surged towards the stage.

The family has been criticized especially as they celebrated the recent birthdays of Kris’s 66th, Corey Gamble’s 41st, and Dream’s fifth.

Kourtney Kardashian, 42, was slammed for “insensitively” taking to her Instagram stories to share a pic of her and her fiancé kissing.

Kris sparked angry comments after she posted snaps of the flowers she had received on her 66th birthday.

Khloe Kardashian, 37, also caused uproar when she posted a snap, that was taken during the night of the Astroworld concert, alongside Kourtney’s ex Scott Disick.

Kim Kardashian, 41, was also slammed for joking around while promoting the new Fendi x SKIMS line just days after the horrific crowd surge.

On Tuesday, Kendall Jenner, 26, deleted the pictures she posted of herself standing behind the mega-structure stage, just hours before chaos ensued.

Rapper Travis responded to the devastating event on his social media and said: “I am absolutely devastated by what took place last night.

The hitmaker’s baby mama Kylie also took to her Instagram stories to react, claiming she did not know people had died at the concert until after the show.

She wrote in a statement: “Travis and I are broken and devastated.

“My thoughts and prayers are with all who lost their lives, were injured or affected in anyway by yesterday’s events.

“I want to make it clear we weren’t aware of any fatalities until the news came out after the show and in no world would have continued filming or performing.”

While Kris hosted Dream’s Barbie birthday party inside of the iconic Calabasas mansion, recognized by many fans as the original KUWTK home, she recently moved into her new $20M LA mega-mansion.

Boxes were seen inside Kris‘ new garage, as luxury cars parked outside ferried her belongings over.

The front porch boasts a neat lawn edged with intricate planting thanks to shrubs and large trees for privacy.

A long rectangular pool with wide steps leading in graces the backyard, which is finished with another neat lawn.

Kris’ massive home also sports a large outdoor kitchen for entertaining, and a stylish terrace above it.

Some construction materials were still seen outside Khloe’s driveway, as workmen pulled off the finishing touches.

It was revealed back in April that Kris and Khloe were moving closer to Kim and Kylie and building two homes in Hidden Hills.