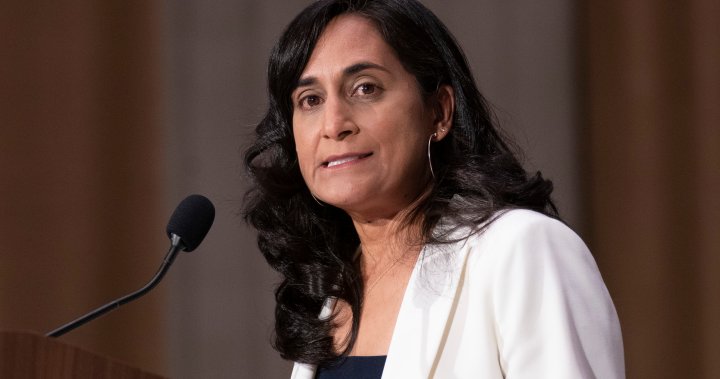 Defence Minister Anita Anand says as part of the process of moving military sexual misconduct offences to the civilian justice system, officials will also have to look at whether past probes by the military police should be moved to civilians for a second look.

In an interview with The West Block‘s Mercedes Stephenson, Anand said she is studying whether there needs to be an independent military watchdog that reports directly to Parliament, as well as whether any previous military police sexual offence probes should be reviewed by civilian authorities.

“These are issues that we are … addressing in the process of implementing this bold move that we are making in terms of transferring cases from one system of justice to another,” she said when asked whether probes such as the one into Adm. Art McDonald should get a second look.

“Indeed, there are going to be a number of questions, such as the ones you raised just now, that we will have to take a look at in order to ensure that justice is served,” Anand continued.

“We have to make sure that the victims of sexual assault are able to access the most efficacious justice system possible, where their rights are going to be protected, where the procedural safeguards are going to be in place, and where we can be assured that they will have a fair hearing.”

Military police declined to lay a charge against McDonald, citing a lack of evidence, but later added their investigation did not find that the allegation against him was “unfounded,” as he had publicly claimed.

Former Supreme Court justice Morris Fish warned in a June report that it is “legally impossible” for military police to charge and prosecute chiefs of the defence staff. Sources cited that warning to Global News earlier in the year when asked why military police had opted not to pursue a military service code charges against retired Gen. Jonathan Vance, who also faces allegations.

Both Vance and McDonald deny the allegations against them.

Anand announced on Thursday that she had “accepted in full” a recommendation from former Supreme Court of Canada justice Louise Arbour that civilians, and not military investigators, should handle military sexual misconduct cases.

Arbour was appointed in the spring to lead an external review into how best to fix the issue, described by experts as an existential “crisis” for the military.

While the problem has existed for decades, it is under renewed and intense condemnation following exclusive reporting by Global News that began in February 2021.

In the wake of that reporting, the military ombudsman issued a scathing paper that argued “vested” political interests had been blocking his office’s ability to respond to complaints brought to them, and urged the government to give his office the mandate to report directly to Parliament.

Currently, the office of the military ombudsman reports directly to the minister of national defence, and the ombudsman said that raises concerns that the office will be eliminated or face retaliation if they raise the ire of the minister.

Prime Minister Justin Trudeau said earlier in the year he would examine that recommendation, but has offered no further detail on whether his government will act on it.

Anand said she is looking at the matter.

“I am studying this very point. At the current time, I think there is validity in having independence and independence in reporting mechanisms,” she said.

“The precise structure that would take, of course, is something that, as I said, I’m studying, but I’m also waiting for Madam Justice Arbour to opine on this.”

Arbour’s final report is due in the spring.

Read more:
Adm. Art McDonald’s letter ‘will be taken into account’ on deciding his fate: Trudeau

In the meantime, Anand and Trudeau continue to face questions over the fate of McDonald, who has been relieved of his duties as chief of the defence staff but retains the rank and title of admiral while Gen. Wayne Eyre acts in his place.

The position of chief of the defence staff is one that serves at the pleasure of the government, meaning they can be removed for any reason, at any time. Despite that, Trudeau has declined to remove McDonald and has not yet provided a reason why he is being allowed to retain the title.

Anand said the decision is up to Trudeau.

“The decision relating to Art McDonald is one that is made by the governor-in-council and is made by the prime minister, and therefore that process will take place,” she said.

“In the meantime, I will continue working as minister with Acting Chief of [the Defence] Staff Wayne Eyre.”