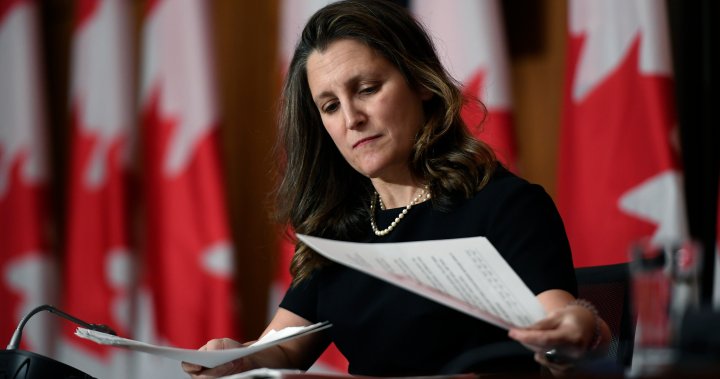 The “significant uncertainty” about the omicron variant and supply chain woes are making it more difficult to predict how quickly Canada’s economy will rebound from the COVID recession.

Welcome to fiscal forecasting in the age of COVID.

Tuesday’s fiscal update forecast two competing scenarios that could have significant impacts on that economic recovery. The “downside scenario” predicts “difficulty in adapting to COVID-19” should more variants, like Omicron, emerge to delay a return to normal economic life.

“Resurgent waves of the virus prevent a full recovery in hard-hit businesses in sectors requiring close contact, large gatherings, or international travel … The ongoing pandemic also exacerbates the supply disruptions and labour shortages impacting a range of industries, with acute challenges extending until 2023,” the document read.

Under that scenario, the recent severe flooding in B.C. exacerbate supply chain issues “weighing on the recovery in the fourth quarter of 2021.” Supply and labour shortages could also “create significant cost pressures which keep inflation somewhat elevated” into late 2022.

In other words: the headwinds currently facing the Canadian economy continue longer than expected.

Omicron COVID variant is ‘scary,’ Trudeau says, but summer will be ‘better’

The rosier outlook projects those supply issues resolving themselves more quickly, COVID-19 risks are adapted to and Canadians get back to spending on services, rather than just goods.

Even that scenario has its risks, however: stronger inflation in the near term, as “robust demand” outpaces constrained supply.

“The path forward will depend on a number of tailwinds and headwinds, which could either bolster the recovery or push it off course,” the document noted.

“Based on those two scenarios they have on growth, the impacts are reasonable. But I guess one could argue that the worst-case scenario could be much worse than what they’re showing there,” said Mostafa Askari, the chief economist at the University of Ottawa’s Institute for Fiscal Studies and Democracy, in an interview.

“There’s a lot of uncertainty right now, essentially because of the new variant. And I think people aren’t sure exactly how this is going to work out.”

But Tuesday’s fiscal update makes clear that windfall will be used by the Liberal government to make “investments that will help boost long-term growth” in next year’s budget.