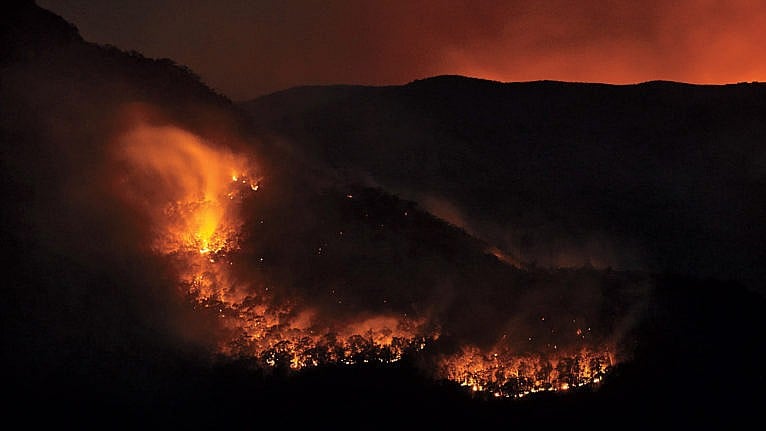 University students in Canada are paying more attention to climate change than ever before. It’s their future that’s in limbo, they say, and they want companies and governments—and their own schools—to start listening.

According to Maclean’s annual student survey, Canadian university students are paying close attention to climate change, and have been for a while—53 per cent say they haven’t looked away from this issue during the pandemic, while 37 per cent say they’re actually paying more attention in the wake of COVID. So we reached out to students across the country to find out why this issue is so important to them, what they think needs to happen next and how they’re changing their own day-to-day behaviour to help.

I’m from Aamjiwnaang First Nation, which is surrounded by petrochemical refineries. Some of my earliest memories are of watching Captain Planet before running out to play in the bush with my best friends; we could see a refinery on the horizon anywhere we looked. I can hardly remember when terms like “global warming” and “climate change” weren’t a part of my regular vocabulary. I wouldn’t say I’m paying more attention to climate change now—it’s never really strayed from my thoughts—but I am paying more attention to my own contributions. Before, I was always focused on becoming an ethical consumer, which left me feeling guilty and hypocritical when I couldn’t give up my favourite unethically sourced chocolate bar for my future great-grandchildren. Now, I try to focus on what I can do, like planting trees, growing my own vegetables, composting my produce scraps, keeping cover crops or letting native plants flourish. It’s been really rewarding to watch things spring to life.

— Natasha Adams, 22, bachelor of arts in the social sciences, minor in sociology and business at Brock University

Climate change was definitely something I was worried about before I heard about Greta Thunberg. But in 2019, my Grade 12 year, she inspired me to pay more attention. I just kept thinking, she’s a couple of years younger than me, and she’s not afraid to stand up and speak to some of the world’s top leaders. I try to do my part, like using reusable bags, shopping at thrift stores and carpooling with friends to school. But one of the biggest things I’ve learned is that large corporations make up the majority of greenhouse gas emissions. There is a lot of guilt placed on consumers, but their impact is small compared to the damage corporations do to our climate. I believe it is more important to put pressure on corporations to move to greener alternatives than to beat ourselves up about using a plastic bag every once in a while. I think there’s a realization among the current generation of students that it is our future that’s in limbo. While climate projection years like 2050 may seem far off, the majority of students will be alive when we hit the terrifying projections climatologists are forecasting. This affects us.

— Maddy Morrison, 20, general in English and technology and society, minor in professional communications at the University of Victoria

My time at Ontario Tech University has gotten me more involved and informed. I’ve been reading more news articles, and I do assignments and papers on climate change. One of the reasons I decided to go into nuclear engineering is because I believe nuclear power is humanity’s most efficient and environmentally friendly way to generate power. By growing the nuclear industry, it is possible to make the transition away from carbon-emitting resources such as coal.

The Australian wildfires in early 2020 recaptured my attention and reignited the urgency of the climate crisis for me. There has been an alarming non-stop increase in large-scale natural disasters and environmental catastrophes. I have started doing my own research, reading more about how much specific actors such as Amazon and Apple are contributing to the climate crisis, as well as countries like Canada and the United States and my own university. I have become much more critical of the products and services I use; I prefer only to support environmentally ethical companies. I have been incorporating environmental considerations in my research papers and proposals. Our generation has learned about the climate crisis since we were very young—some of us wrote letters and signed petitions from as young as second grade. So we are not only well informed of the issues, but [also] well aware that our governments are not listening to us. We are tired of not being heard.

Climate change in the classroom

Our generation is the first to experience not only the effects of climate change, but also the effect of the population boom. How much hotter can it get? How many more people can planet Earth support? We still have time to make a difference in the world. I’m in an environmental education program at SFU and I want to bring this issue into my teaching practice, which has really made me look at my own day-to-day behaviour. I ask myself, “How can I do better?” Critics say we can’t shift to renewable energy and green industries because it will take too long and be too expensive. But let’s take a look back at history, at how rapidly industrialization, capitalism and technology have evolved in the last 250 years. We can’t we evolve again?

Reducing use of plastic

I am minoring in human geography at Brock, and the courses I have taken so far have a lot to do with environmental and climate change. I have been reducing my use of single-use plastic and recycling items properly. I have also tried to carpool with friends and family more often. I know some fast food restaurants have stopped providing plastic straws, which has been amazing to see, but there is a lot more that needs to be done. I think changes need to be made very quickly by the government to help save our planet. The longer we wait, the more damage is being done.

This article appears in print in the 2022 University Rankings issue of Maclean’s magazine with the headline, “Change agents.”