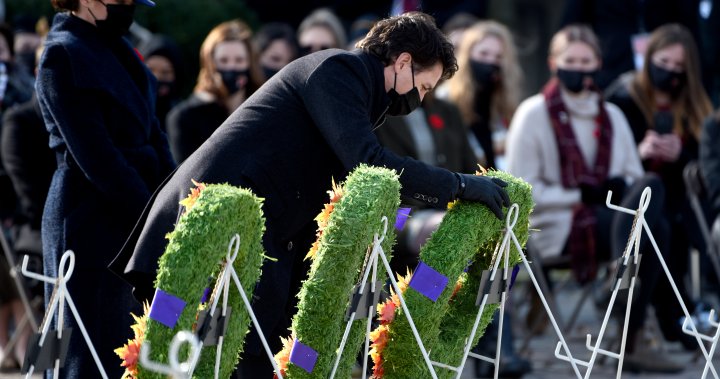 Canadians crowded the streets of Ottawa in solemn silence as they marked Remembrance Day on Thursday, gathering in numbers that haven’t descended on the National War Memorial since before the COVID-19 pandemic began.

For veterans, the return of a full commemoration wasn’t just an opportunity to reflect — it was also a chance to reconnect, too, after COVID prevented them from gathering last year.

“I’ve noticed — some of my friends, my old buddies — their ages,” said Jean-Pierre Riendeau, a Canadian peacekeeping veteran.

“You know, I haven’t seen them for three years. They’re aging.”

Read more:
Remembrance Day 2021 marks return of in-person ceremonies across most of Canada

While their faces may have earned a few extra lines in the years since they last gathered in Ottawa, veterans of all ages stood side by side and smiled as they reconnected with old friends.

2:37
Remembrance Day 2021: The story of Canada’s most decorated Indigenous soldier

Remembrance Day 2021: The story of Canada’s most decorated Indigenous soldier

Canadian veteran Ray Paplove drove five hours to pay his respects and remember his fallen comrades in Ottawa on Thursday. While COVID-19 restrictions meant he couldn’t march alongside his fellow veterans in the traditional parade, which wasn’t held this year, he was still “honoured” to be invited to participate in the ceremony.

“I always attended Remembrance Day ceremonies, I don’t think I’ve missed one in Ottawa, and I wanted to march. I wanted to march with the veterans to the Cenotaph. But of course, with COVID and so on, there is no longer marching,” Paplove said.

“I was invited to participate as a veteran, which I’m very honoured and pleased to do.”

While small tweaks were made to the ceremony to keep attendees safe amid the COVID-19 pandemic, many of the hallmarks of the day — which had been missing last year — were back in full swing.

An estimated 15,000 people packed the streets surrounding the Cenotaph and looked on as veterans and politicians alike laid down their wreaths.

The Ottawa Children’s Choir was also back in action, performing In Flanders Field. A bagpiper and a trumpeter both performed solemn songs, and speeches rang through the streets over loudspeakers. Cannons boomed in the background at 11 a.m. local time, and the snowbirds ripped across the sky to mark the day shortly afterward.

Freeman Chute, a veteran and director of poppy and remembrance at the Royal Canadian Legion, said it was “a great day.”

“It was very nice. Nice to see all the people show up, and they really participated in this year, too. I think they appreciate getting out and seeing this,” Chute said.

“The general public loves being here in person for this and to celebrate their veterans and memory of the veterans. It’s a great time of year for them.”

2:17
Crowds return to honour the fallen at Remembrance Day in Ottawa

Crowds return to honour the fallen at Remembrance Day in Ottawa

It was a taste of a time before COVID, according to Wayne Jacquard, a 36-year veteran of the Royal Canadian Mounted Police.

“I think that’s important, for the public to start being able to feel that they’re coming back into some form of normalcy. And this form of remembrance is fantastic,” Jacquard said.

While some things were very different from last year, other things stayed the same. Prime Minister Justin Trudeau and Sophie Gregoire-Trudeau attended in person, as they did in 2020, along with Veterans Affairs Minister Lawrence MacAulay, House of Commons Speaker Anthony Rota, Gov. Gen. Mary Simon and newly appointed Defence Minister Anita Anand.

But instead of the silent reception they received last year, the politicians exited their cars to a crowd of onlookers. As Trudeau awaited the arrival of the Silver Cross Mother, two small boys sitting at the front of the crowd yelled and waved. He smiled and waved back.

Trudeau’s arrival was delayed by the discovery of a suspicious package on-site, but the safety concern was quickly quelled. Aside from a ten-minute delay to the schedule, the ceremony proceeded to go off without a hitch.

That was a relief for Riendeau, who recalled a previous ceremony where things did not go quite so smoothly — at least for him.

“Two years ago, when there was a parade, I laid a wreath. And when I was coming down, I tripped and fell flat on my face,” he said, chuckling.

“There’s nothing like (that) being seen by 37 million people.”

Read more:
Why all Canadians should know the story of a Great War hero known as ‘Peggy’

A new face represented Canada’s military as its top soldier at this year’s ceremony. Acting chief of the defence staff, Gen. Wayne Eyre, spoke with Global News’ Mercedes Stephenson as he waited for the commemorations to begin.

Eyre also said he thinks of the men who served alongside him in Croatia and in Afghanistan, 158 of whom were lost during that time.

“I think about the ten that were killed under my command in 2007,” said Eyre.

“This is a tremendously personal day to reflect on the nature of our service.”

3:52
Poppy’s history as a symbol of remembrance

Poppy’s history as a symbol of remembrance

Conservative Leader Erin O’Toole, who is a veteran himself, also said the ceremony presents an opportunity to “honour the brave men and women in uniform who have served our country and those who continue to serve.”

“Our Veterans and those serving today represent the very best of what it means to be Canadian. Their selflessness and courage serve as an inspiration to all of us,” he said in a statement.

“Today is our opportunity to thank them for serving Canada at home and around the world so that we can live in freedom. Today, we must also remember those who gave their lives to serve … Lest we forget.”

NDP Leader Jagmeet Singh echoed the sentiment in a statement of his own.

He said Canadians will “always remember” the “selfless courage” of those who have served, “and the high price of war, today and every day.”

A few hours before the ceremony, another commemoration was held at the Indigenous Veterans War Memorial at Ottawa’s Confederation Park — just a few minutes’ walk from the National War Memorial.

For Tim O’Loan, an Indigenous veteran who served with the Canadian Armed Forces from 1983-1993, remembering Indigenous soldiers goes beyond paying respects.

“Our heroes that went off also included Indigenous heroes. And to unpack that history is part of reconciliation,” O’Loan said.

When O’Loan served, the military was different than it is today, he explained.

“There was a lot of racism, and a lot of racism perpetrated against myself, to be honest. I didn’t understand why, because I was a kid. I was 17,” O’Loan said.

“In all honesty, that was one of the reasons why I left the military in 1993.”

“It’s wonderful to see so many people come out. Because this started with very few,” he said.

“But this isn’t about numbers, right? It’s about Indigenous veterans getting together to honour, and if more people come out, that’s great. But it was never about numbers.”

Over at the War Memorial, as the ceremony drew to a close, Canadians walked up to the Cenotaph and laid down their poppies. As the memorial was blanketed in red, Jacquard looked on.

“People have to have some sort of release,” he said.