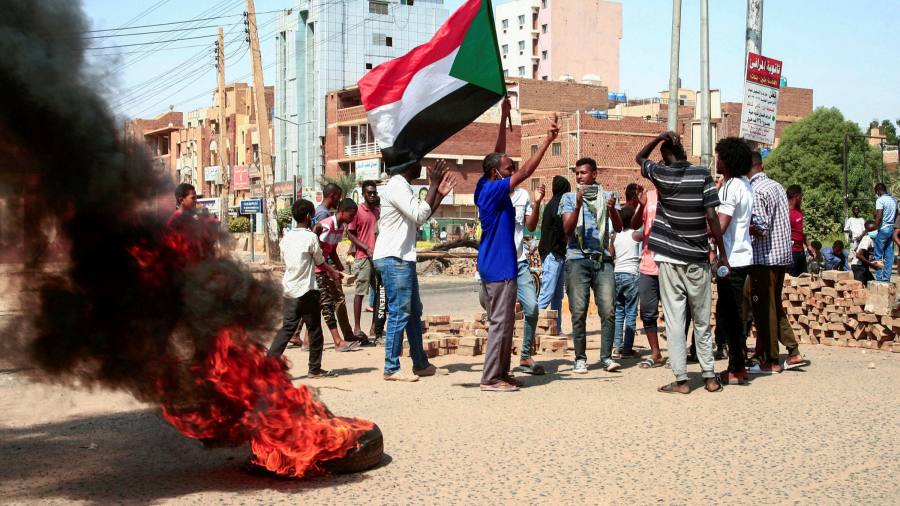 Abdel Fattah Burhan has form when it comes to coups. In 2019, the Sudanese general helped oust longtime autocrat Omar al-Bashir as part of a popular uprising. This week, soldiers under his command arrested civilian prime minister Abdalla Hamdok and members of his cabinet.

“We did not carry out a coup,” Burhan said on Tuesday at his first news conference since Monday’s takeover, adding that he had ousted Hamdok’s civilian government to avoid a civil war. He said that Hamdok was safe in Burhan’s house and the military would soon “go back to the barracks”.

However, judging from continuing pro-democracy protests across the country, which have already left at least four people dead and more than 80 wounded according to the doctor’s union, many Sudanese citizens do not believe him. “What the military is proposing is good on paper, but the people do not trust them,” commented a Sudanese businessperson.

The day before, Burhan had vowed on national television to hold free elections by July 2023. But he also dissolved the Sovereign Council, which shared power between the military and civilians and had overseen Sudan’s transitional government since Bashir’s fall.

A senior aide to Hamdok was blunt. “This is a coup, a real coup and they [the military] are likely to press on to have a fake election and declare themselves winners and continue to rule,” the aide said.

Tensions had been brewing for several weeks between the civilian and military sides of Sudan’s hybrid, transitional government.

An army faction attempted a putsch in September. Since then, cabinet members have accused the army of wanting to grab power. The military in turn demanded changes in government, saying it needed more non-political appointees. Earlier this month, Hamdok himself described the situation as Sudan’s “worst and most dangerous” political crisis since the 2019 ousting of Bashir, who ruled Sudan for 30 years.

A crunch moment was purportedly coming next month when Burhan was supposed to hand over chairmanship of the Sovereign Council to Hamdok, according to his aide, marking the first time in decades that a civilian would have led Sudan’s government. “The coup has been in the making for a few weeks,” the aide added.

Western countries have denounced the coup, called for the detained cabinet ministers in the civilian government to be freed and said they would cut off aid if the military did not restore power sharing. On Monday, the US withheld $700m of aid.

Burhan has since moved into damage limitation mode. By vowing to hold elections in 2023, he “is trying to signal that the coup is only a temporary measure and thus quiet opposition”, said Jonas Horner, senior Sudan analyst at Crisis Group.

“But . . . few will accept Burhan’s claim that he and his allies acted in the national interest,” Horner added. “Sudan’s generals are unlikely to reverse [the coup] of their own volition” as “the military had much to fear from passing [the] key milestone” of a civilian becoming chair of the Sovereign Council.

Burhan’s military takeover marks a sudden reversal of Sudan’s return to the international fold following decades of isolation under Bashir, an alleged war criminal, after months of pro-democracy protests led to his ousting.

Over just the past year, Sudan was removed from the US’s list of states sponsoring terrorism, the country normalised relations with Israel, the nation secured World Bank and IMF backing and the Paris Club agreed to restructure $23bn in debts.

But such progress was left hanging in the balance on Monday when, according to Hamdok loyalists, armed forces stormed the national broadcaster, arrested its director and replaced its normal programming with uninterrupted music and Burhan speeches.

Later that day, military forces opened fire on protesters marching towards the army’s headquarters. Pro-democracy protesters took to the streets again on Tuesday, blocking roads in the capital with barricades and burning tires.

“There are strikes everywhere — the doctors, the engineers, the civil servants, the bankers’ union,” said Taha el-Tayeb, head of Sudan’s banking association. “Things are very tense. Lots of people are blocking the streets, the military is everywhere. It’s difficult to predict what will happen.”

In a statement posted on the Facebook page of the culture and information ministry, which is loyal to Hamdok, the prime minister’s office said: “The Sudanese people and the world will not be deceived by the claims of the head of the coup that what he is doing is to protect the revolution and its prime minister.”

Maryam al-Sadiq, the civilian foreign minister, added that the government “condemns this military coup and will not give in to its unconstitutional declarations”.

Unlike many fledgling civilian protests, this generation of protesters are honed from having participated in the 2019 revolution that eventually led the military to topple Bashir. Today, they are again vowing not to back down.

“The plan is to keep resisting, the streets are all blocked with barricades, we are calling for civil disobedience,” said Duaa Tariq, a 29-year-old activist and artist who took to the streets this week, just as she did two years ago.

Tariq acknowledged that economic hardships such as runaway inflation and fuel shortages have fed popular discontent with Hamdok’s government.

Yet “the whole idea of the [2019] revolution was to take down the military rule” of Bashir’s regime, she said. “So, we are still holding [out for] civilian rule and for Hamdok to be released and put back in charge.”