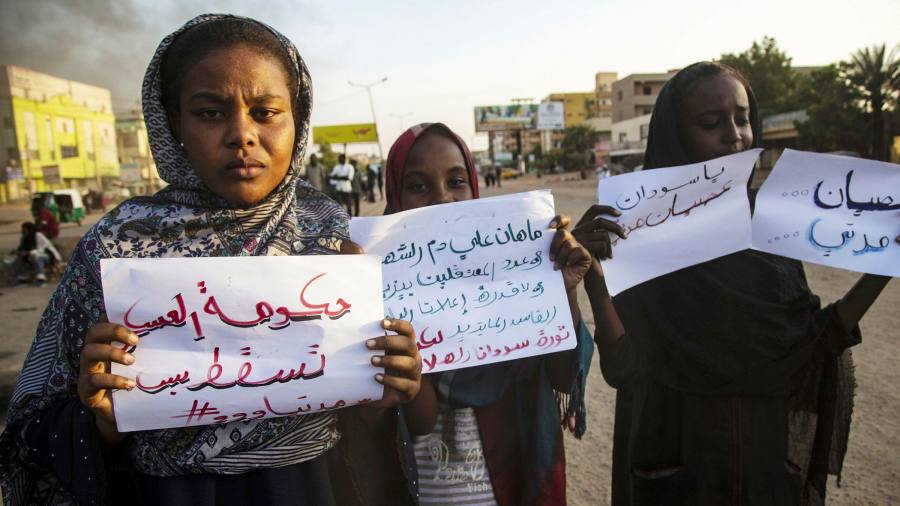 Alaa Salah became a symbol of resistance in 2019, when the young Sudanese student climbed on to a car outside Khartoum’s military garrison to rally the crowd demanding the removal of dictator Omar al-Bashir.

Dressed in a striking white toub robe and reciting a revolutionary poem, some called her Kandaka, a reference to the queens of ancient Sudan who would lead their warriors into battle.

Her actions two years ago — and those of other women whose voices were suddenly thrust into Sudan’s political discourse — helped convince the country’s armed forces to end Bashir’s three-decade Islamist regime, ushering in a fragile democracy.

Yet this week, as the transitional government was dissolved in a military coup, troops and protesters were back on the streets of Khartoum and the “woman in white” was forced into hiding.

“It’s very dangerous. My life isn’t safe and my home is watched all the time by militiamen,” Salah told the Financial Times from her hide-out in the Sudanese capital. “I’m very sad, not only for me but for all the people.”

On the betrayal of the 2019 revolution’s ideals felt by many Sudanese, she added: “I feel very angry.”

Sudan’s army this week sought to tighten its grip despite international pressure, suspension from the African Union and the freezing of World Bank aid, as security forces arrested government ministers and activists in the face of mass demonstrations, strikes and a civil disobedience campaign.

As in 2019, female activists have played a significant role in this week’s protests. “This is a fully fledged military coup and we’re resisting all the way,” said Mariam al-Mahdi, who was foreign minister in the dissolved government. “Nothing will deter the women of Sudan, who are fighting for democratic transformation.”

For Muzan Alneel, an engineer in her 30s who was part of the 2019 protests, the battle was never truly won. What followed Bashir was a far cry from her goals to end repression, corruption and the oppression of women, or stop the endless conflicts and reverse decades of international isolation.

She, like others, opposed the presence of uniformed men in the transitional government from the outset after their alleged role in the June 2019 massacre of about 120 protesters, which occurred after Bashir had been toppled.

“Women like myself have felt betrayed since the day they signed the deal with the military,” Alneel said. “We had no hope that the military might be able to work within a civilian state. We knew this was coming and we were just waiting for it.”

Even after the formation of a civilian-military transitional government under Prime Minister Abdalla Hamdok, tensions exacerbated by the parlous state of the economy were never far from the surface.

This laid the foundation for the events that occurred in the early hours of Monday, as Hamdok and other civilian leaders were detained and the state broadcaster was seized.

One reason for the coup, analysts have said, was that Sudan’s military leaders feared not only losing economic and political power but also the possibility of prosecutions. Yet al-Mahdi said it was also “a serious coup against the presence of women in Sudanese society”.

Although many aspects of Islamic law were overturned after Bashir was removed, women activists said they were left out of negotiations and poorly represented in policymaking. Al-Mahdi was one of only four women in the 25-member Sudanese cabinet, which she blamed partly on the military and partly on a political culture that has historically been dominated by men.

“Definitely, women felt betrayed after the revolution. We felt completely excluded from the different levels of decision-making,” said another female activist who asked for anonymity over fear for her safety. “Even when women are included, they’re discriminated against within the institutions, their jobs are made very difficult.”

Nadia Nur, a former adviser to Sudan’s finance minister in the transitional government, said: “I don’t think that after the revolution women got a fair share of opportunities compared with men.”

She now fears a “huge going back” of some of the restrictive Islamic rules for women — which have been relaxed since the fall of Bashir — if the military retains power, such as not being allowed to wear trousers or have uncovered hair.

“They’re going to suppress women and give them less opportunities and less rights to participate in the development of Sudan,” Nur said. “It doesn’t look good for all the population, but I think women are going to suffer the most.”

Abdel Fattah Burhan, the general who has been the face of the coup, has claimed he would stick to the transition to democracy, promising to work with a technocratic civilian government and to hold elections in two years.

Yet many Sudanese people do not believe such promises, including the tens of thousands who protested in cities across the country this week. A large demonstration is set to take place in Khartoum on Saturday.

“This tells us one thing: that civilians are still there, women are still there, the commitment is still there and people are not being deterred by the violence. I definitely feel like the spirit of the 2019 revolution is back,” said Asmaa Ismail, a 35-year-old activist who was one of those on the streets this week.

Salah, who is keen to rejoin the protest movement she helped inspire, is clinging to hopes that popular resistance can pressure the army leadership to reverse the coup and reinstate Sudan’s fledgling democracy.