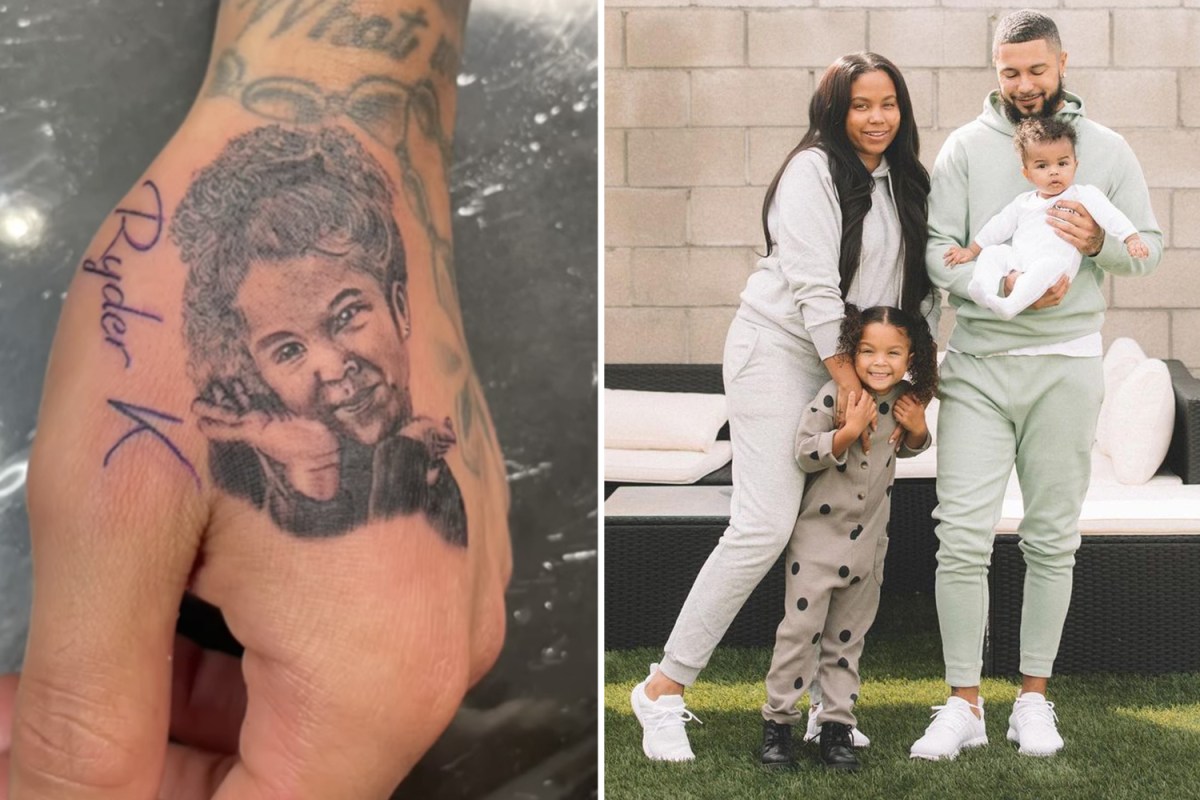 TEEN Mom Cheyenne Floyd’s fiancé Zach Davis showcased his new tattoo of her daughter Ryder’s face on his hand in a sweet video.

The reality star shared a clip on Instagram of the design process along with the finished product.

The clip began with Zach sitting in the passenger seat of the car looking at pictures of his step-daughter-to-be on his phone while on the way to the tattoo appointment.

She captioned the cute moment: “My fiance tattooed his bonus daughter’s portrait today,” referring to her four-year-old daughter.

The video then continued with Zach explaining the placement of the new ink as he pointed to a bare spot on his hand surrounded by his collection of other tattoos.

The clip proceeded to show the tattoo artist sketching the artwork while tracing a photo of the toddler on an IPad.

Once the sketch was complete, the new dad showed off the design – a close up of Ryder’s smiling face in her hands – before sitting down to complete the tattoo.

Cheyenne added the caption: “I am so blessed to have a man that not only loves me but loves my daughter as his own.”

The beaming dad revealed the finished product, which included the tot’s name “Ryder K” under her portrait.

The TV star set the video to the song I Get To Love You by Ruelle.

She captioned the post: “You never cease to amaze me @z.terrel 🥺🤍
Artist @bookie_thompson
Photo @ashabailey_“

Fans adored the sweet gesture in the comments with one writing: “Seriously crying omg🥺💜”

While a second person agreed, writing: “Omg that so beautiful! I’m crying .😢to see a man to love your baby as his own is beautiful ❤️that how it should be . You got a real one …. One we all pray 🙏 for !!! God bless you”

Another user echoed the statement commenting: “That’s a beautiful expression of love and to show Ryder that she’s just as much a part of his heart as you and Ace are ❤️”

The MTV star and Zach are also parents to six-month-old son Ace.

Cheyenne’s future husband has shown his devotion to his new family as he also gifted his step-daughter-to-be with a diamond ring when he proposed to her mother back in April.

The 30-year-old shared the news on his Instagram stories as he filmed Cheyenne flaunting her stunning engagement ring.

Cheyenne wrote in her stories: “Still not over that he got both me and Ryder rings. He knows this is a package deal.”

Earlier this month, the Teen Mom OG star announced that both her children were “signed with a print and commercial agency.”

Sharing some of her kids’ new professional snaps, the mom-of-two proudly smiled, holding Ace in one arm with Ryder cuddled up against her hip and smiling in the other.

Additional photos by Asha Bailey photography showed Ace and Ryder looking adorable together, smiling and posing for the camera.

Cheyenne wrote: “I am so proud of both of my babies! Last week they both got signed to a print & commercial agency.

“It’s full circle because it was the same agency I was with as a child.”

The Teen Mom continued: “As of yesterday, Ace has already booked his first job! It’s an amazing feeling being able to help Ryder follow her passions, ‘mom, I want to be a Disney kid,’ and y’all know I will move mountains to make it happen!”