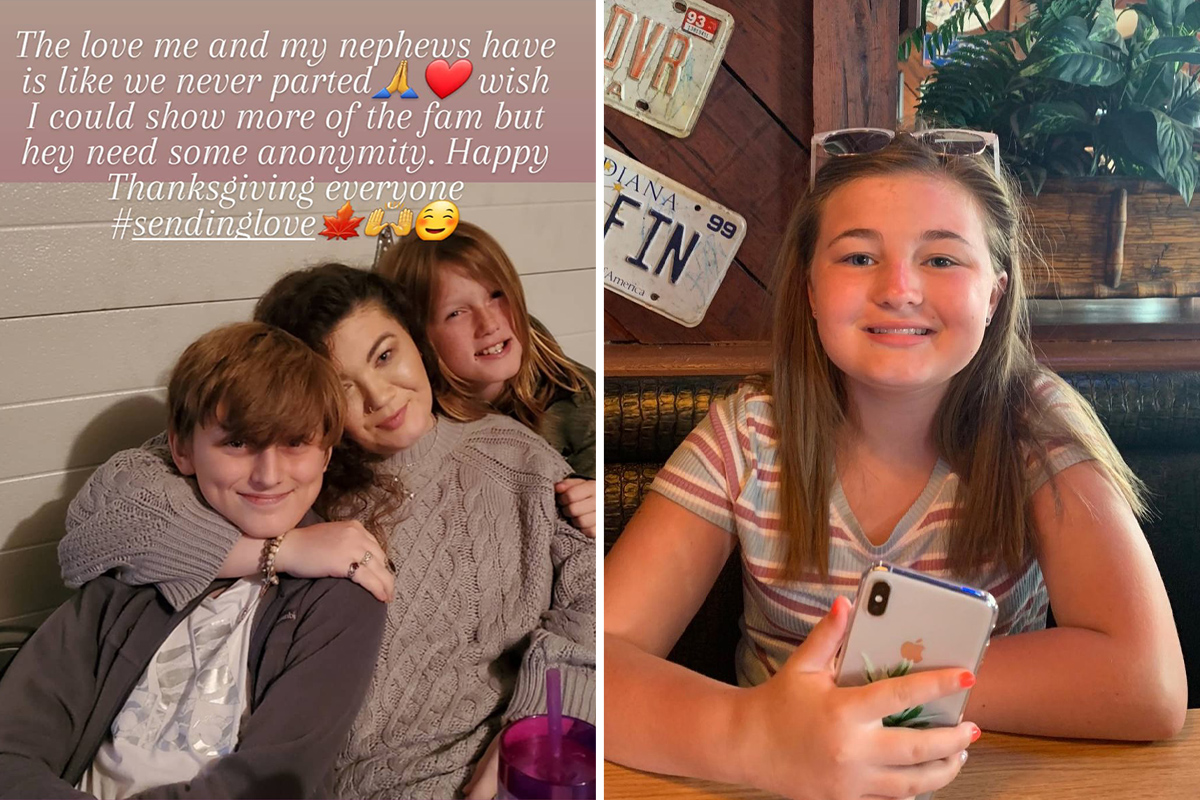 TEEN Mom Amber Portwood is under fire after sharing a post gushing over her nephews in which she was accused of throwing some shade at daughter Leah, whom she has had a rocky relationship with.

The MTV star, 31, posted a photo of herself sitting with her nephews to her Instagram Story.

Amber continued: “Wish I could show more of the fam but they need some anonymity. Happy Thanksgiving everyone.”

The post comes as Amber is struggling to maintain a relationship with her daughter Leah, 12.

One wrote: “Bet she posted this hoping to bother Leah.”

Another added: “This reads like a scorned ex lover trying to make the guy who dumped them ‘jealous’ by taking photos with new guys… wow.”

She was slammed early this month for “making excuses” and “blaming everyone” for her floundering relationship with her daughter.

Her struggles to connect with Leah played out during the most recent season of Teen Mom OG, with Amber growing increasingly upset about Leah’s desire for space.

She and ex Gary Shirley planned to attend therapy together in the hopes of coparenting better as they butted heads several times as a result of the strife between Amber and Leah.

During one episode of the show, Amber attempted to talk with Gary about the situation, claiming “mental illnesses” played a part in the distance between her and Leah.

She explained that her illnesses make everything difficult, noting that she “tries her best to even get off this couch and do school.”

Amber went on to say that she is “trying to have a relationship with Leah and it’s hard.”

She added: “I’ve accepted it.

“But what I haven’t been able to accept that my medication – no matter what and no matter how much I take of it – will never fully keep me like you.”

Although Amber claimed she was trying, fans flooded Twitter with criticisms of the star.

One wrote: “Man, I’m so tired of amber and her excuses.”

Another called Amber “lazy,” while a third said: “Amber blames everyone but herself. The medication, Gary, Kristina, Leah, the cute little sister, the garden…”

“Amber hasn’t changed since the first day we met her,” someone else chimed in.

Earlier this month, Amber visited Gary’s home to spend time with his wife Kristina, their daughter Emilee, and Leah.

Amber entered the home and tried to break the silence, waving at Leah from a distance, saying: “Hello.”

She also tried to chat with Kristina, whom she previously called a home-wrecker.

Amber said: “It’s so odd because there’s no one in my house. Like living alone for 16 months has been amazing. I’ve been really figuring things out… it feels peaceful, I think.”

At one point Leah grabbed a DVD from Emiliee’s hands, prompting Amber to ask: “What’s that?”

Her daughter responded with a straight-forward: “A movie.”

Amber attempted to get more information, including what the film was about, to which Leah said: “Stuff…”

After a quiet moment, Amber announced that she was leaving, saying: “I’m so sorry, guys, I am like so tired.”

In the car she complained: “I don’t know what the point of this was…driving 40 something minutes, so that’s cool.”

Amber previously confessed that Leah declined her apologies for past mistakes.

She attempted to apologize again during Teen Mom OG, sending her daughter a video.

Leah watched the clip, but said she wasn’t sure it was sincere and she wasn’t ready to accept her mother’s words.