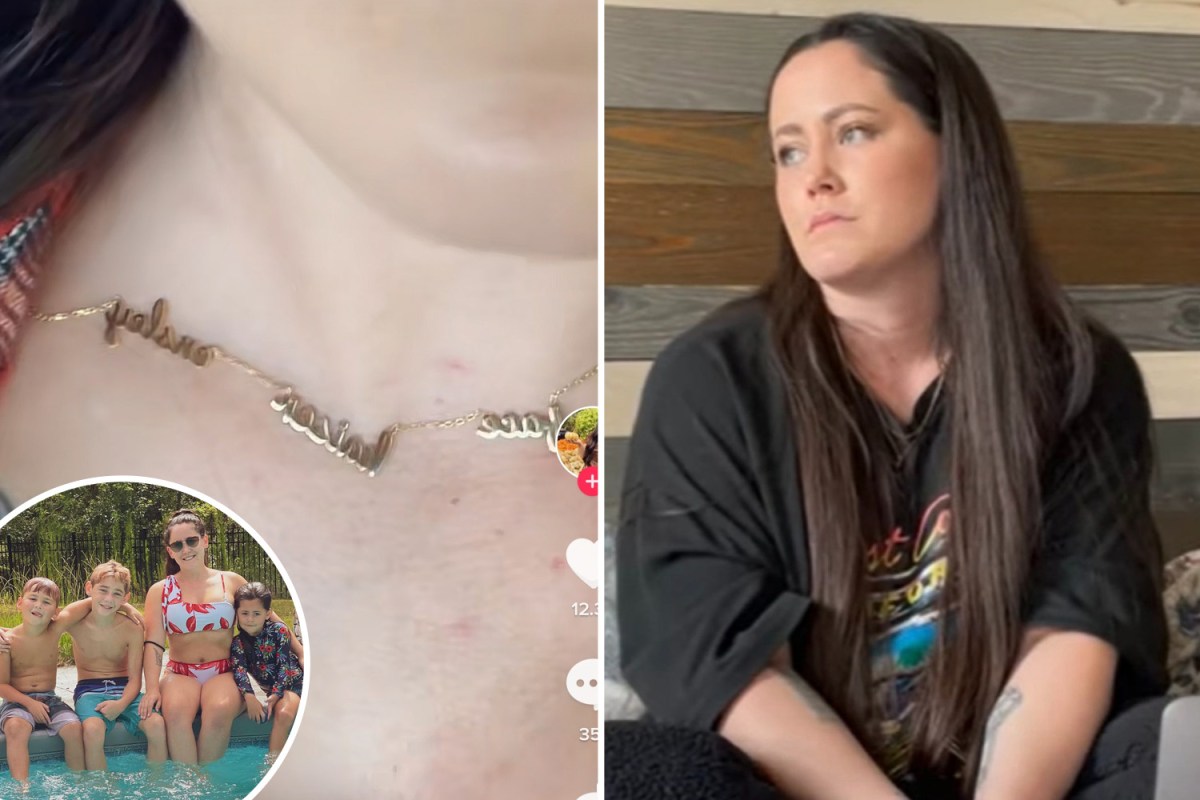 TEEN Mom fans slammed Jenelle Evans for not including the names of her husband David Eason’s kids on her necklace.

The 29-year-old recently showed off the piece of jewelry she has that features the names of her biological kids but not step-kids.

Jenelle showed fans that she now wears a gold necklace that has her three kids’ names on it in cursive lettering.

She also has daughter Ensley, four, with her husband David, while he has Maryssa and Kaden from previous relationships.

Fans slammed Jenelle for only including her biological kids and not her step-kids, as well.

Another upset fan wrote: “This annoys me so much.

“Don’t marry someone who has kids if you’re not willing to treat them like they’re yours, FFS.”

A third sarcastically commented: “Jenelle showing off her necklace with ‘all’ the kid’s names on it.

“I find it funny with how much she hollers about David’s ‘custody battle’ for Kaden that he isn’t included on the necklace.

“Neither is her step-daughter, Maryssa, who actually lives with them.”

This comes after Jenelle was blasted for something similar earlier this year.

She refused to mention her husband’s son, Kaden, in a video all about their family.

The 29-year-old opened up about David being “accepting” of her having kids from a previous relationship because he had a daughter, Maryssa, but she didn’t talk about his son.

Jenelle shared a TikTok video to answer a fan’s “curious question” asking if David ever judged her or reconsidered dating her when he found out she already kids.

While she has two kids from previous relationships, so does David, though he lost custody of his son when Kaden was just a baby.

Even so, fans blasted Jenelle for not even mentioning him in her new video, only bringing up the girl.

“When me and David met, he already had a daughter Maryssa, and she was eight,” the TV personality told her followers.

She continued: “He was really accepting of me having kids because he had kids of his own. So, he’s like, ‘Let’s just be one, big happy family.’”

At the end of the video, Jenelle turned to David and asked: “Ain’t that right, baby?,” to which he confirmed, “Si, baby.”

Angered fans took to the comments to point out: “He has a son too right?”

Many asked the same thing, with one writing, “What ab his son?,” and another one saying, “Why do you always leave out his son?”

Earlier this year, David received backlash for sharing a cartoon drawing of his family dressed as The Incredibles without his son Kaden.

The photo contained David, Jenelle, and their children Maryssa, Jace, Kaiser, and Ensley.

Fans were quick to notice the absent child, as they took to the comments to slam the father for negligence.

“Isn’t there a kid missing or am I confused,” one asked snarkily, while another replied: “Yeah…I feel so bad for that little boy. How do you just exclude a child from everything.”

The father of three had captioned the shot: “Power Family.”

Of all of their combined kids, Jenelle recently shared that they “have Ensley, Kaiser, and Maryssa full time.”