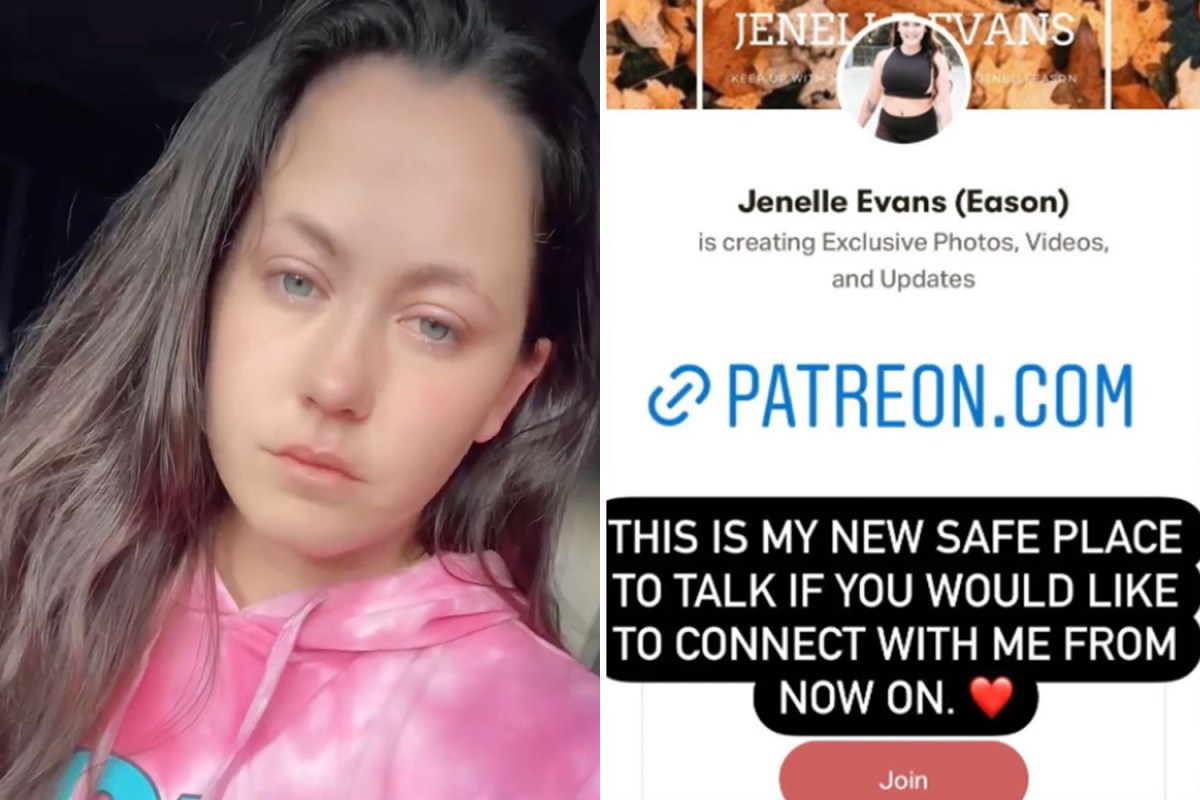 JENELLE Evans has been slammed for charging fans to see her photos and videos – days after her new clothing line was dropped.

The Teen Mom 2 alum, 29, announced at the weekend that she was taking a social media break as she battled depression after her fitness range with SewSewYou was axed.

On Sunday, however, Jenelle created an account with Patreon, where fans have to pay to become a “Patron” to access her photos and videos.

The reality star explained: “This is my new safe place to talk if you would like to connect with me from now on,” and added a heart emoji.

Her profile bears the description: “Mostly known for being on MTV Teen Mom 2 from 2009-2019 and now keep fans updated via social media. Get to know Jenelle on a more personal level on this site.”

The MTV alum has so far uploaded three posts and has three “patrons”.

Critics flocked to Reddit to slam the mother-of-three’s latest venture, with one writing: “Jenelle’s new safe space. Who would pay $10-$25 for this?”

“She has proven time and again that the work required to put out content consistently is beyond her,” a third agreed.

“Why would anyone pay for yet another endeavor that will crash and burn without even providing two weeks of content?”

At the weekend, Jenelle tearfully announced that SewSew You had dropped her fitness and loungewear line after “haters” put pressure on the company.

The ex MTV star then “decided to do my own website under my own name.” She attempted to fill out the website with images of her fitness and loungewear.

Unfortunately, SewSew You announced that Jenelle’s “line is canceled.”

In the next shot, Jenelle was seen wiping away the tears from her eyes before burying her face in her hands.

“Sorry to let everyone’s hopes up but SewSew You has dropped me because of haters.”

The young mom had been preparing for the clothing line’s release on November 17 before the company pulled the plug.

After sharing various shots of her modeling the clothes online in anticipation of the launch, she received some harsh criticism from fans.

A third person chimed in: “This suit is so unflattering,” and one chimed in, “Its cheap material for what I’m guessing will be a high price.”

After being dropped, Jenelle announced that she was taking a hiatus from social media, writing: “My mental health is number 1.

“Honestly I’m so depressed I need time away from social media. Pray for me, thanks.”

Fans were confused when she posted a dancing video with her children just hours after her “break” on TikTok.

Jenelle’s tough week continued when her husband David Eason was arrested on Friday for “driving with a revoked license” among other charges.

According to the Columbus County Sheriff Department, the 33-year-old was cuffed late Friday night and was slapped with three charges – he is scheduled to be in court on February 9, 2022.