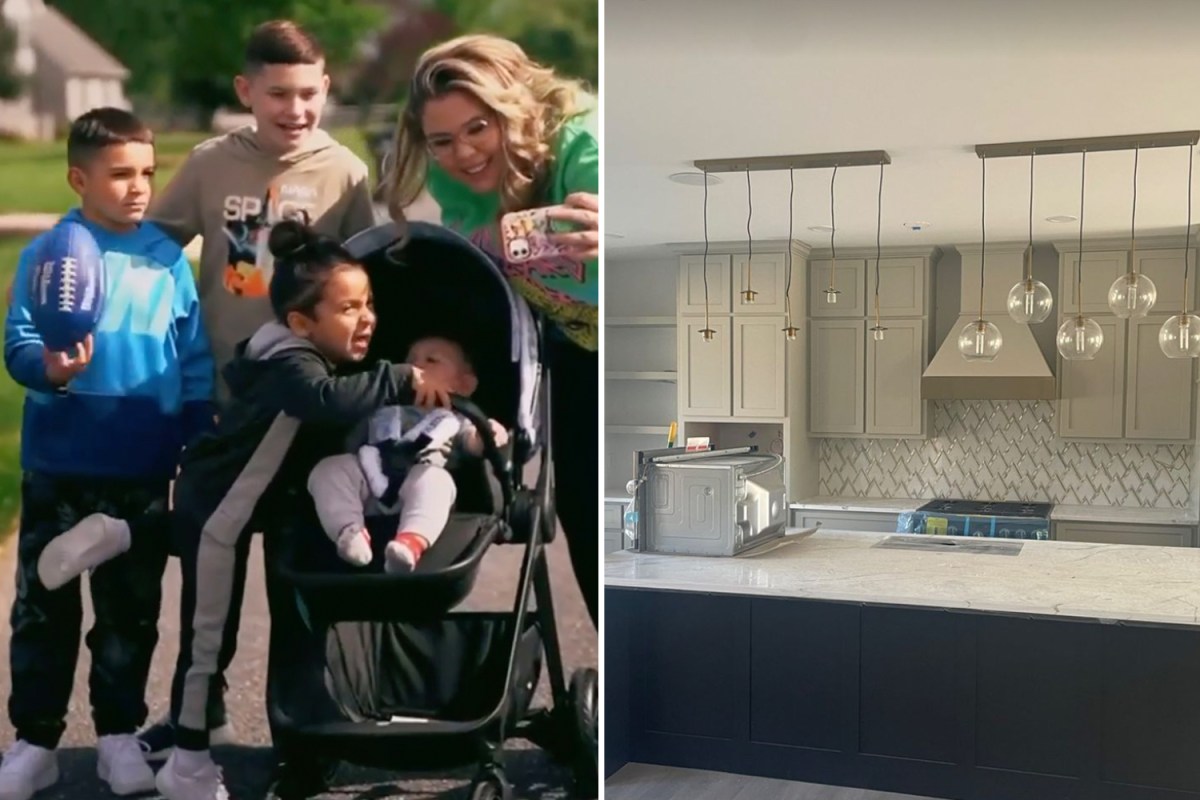 TEEN Mom Kailyn Lowry showcased the lights in the kitchen of her new Delaware mansion as the move-in date approaches.

The reality star has kept fans in the loop on the construction process by sharing updates on social media.

In her latest post, Kailyn snapped a photo of her kitchen to show off the finishing touches including two sets of dangling light fixtures being installed.

The MTV star captured a full view of her long kitchen island made of marble countertop and black wood beneath the hanging ball lights.

She captioned the post: “Kitchen lights going in” along with a pair of heart and star-eyed emojis.

Kailyn has received mixed reviews from fans on her design choices throughout her new home.

The most recent comments have been about her bathroom, as her followers ripped apart a post she shared on Instagram.

Excited to share the tile flooring she chose which is an off white color with uneven black streaks mimicking a marble pattern, Kailyn captioned the pic: “Tile is everything.”

However, Kailyn’s fans on Reddit felt differently about the bathroom’s progress.

One wrote: “This is awful. It literally looks like her kids scribbled on the floor.”

Another commented: “The tiles around the door frame don’t line up and it’s driving me nuts.”

A third agreed, and said: “This tile will never, ever look clean. It’s awful.”

Another posted: “Omg that’s horrible. It looks so bad.”

Earlier this month, Kailyn took to her Instagram Stories to give fans a look at a few different light fixtures she installed in her house.

One of the Delaware home’s new additions had a gold rod hanging from the ceiling with different size circular light fixtures.

The Teen Mom 2 star added a poll onto the post asking fans if they “love” or “hate” the piece.

In a following slide, Kailyn showed off the light fixture at different angles and said she’s “obsessed.”

Another light fixture had similar gold rods, but hung horizontally and featured circular bulbs sticking out in different directions.

While the star seemed happy with her decision, fans rushed to criticize Kailyn’s purchases.

Others agreed, as one fan added: “Oh wow, I hate this, thanks.”

Another wrote: “Everything she is picking is trendy and cheap looking. I especially hated the kitchen backsplash with gold in it. Good luck selling this house in a few years. It’s going to be dated and gaudy.”

Later, Kailyn posted again about the progress on her kitchen.

The TV personality wrote on her post: “Y’all can’t tell me s**t about my kitchen tile. I’m obsessed.”

Kailyn revealed the completed outside of her mansion and showed off more of her kitchen cabinets on her Instagram Story.

She captioned the post: “What’s going on here?” and showed her completed house surrounded by construction and pits of dirt.

Kailyn showed off how the kitchen cabinets were coming along and thanked the company installing them.

She said: “If every part of the building process was as seamless as working with Alan, I would build 100 houses.”

The 29-year-old hasn’t always loved the building process as earlier this month she admitted on an episode of her podcast Baby Mamas No Drama that she couldn’t wait for it to be over.

After her co-host Vee Rivera revealed several real estate projects her and her husband Jo have in the works, the TV star opened up about her frustrations with her own remodel.

“I thought I was really gonna love like the house stuff, so I was kind of living like vicariously through you guys like doing real estate and like flipping and stuff. I hate it,” she revealed.

“I love HGTV and I love watching people do it online and stuff so I thought because of that interest that I was gonna like doing it myself but I hate it.”