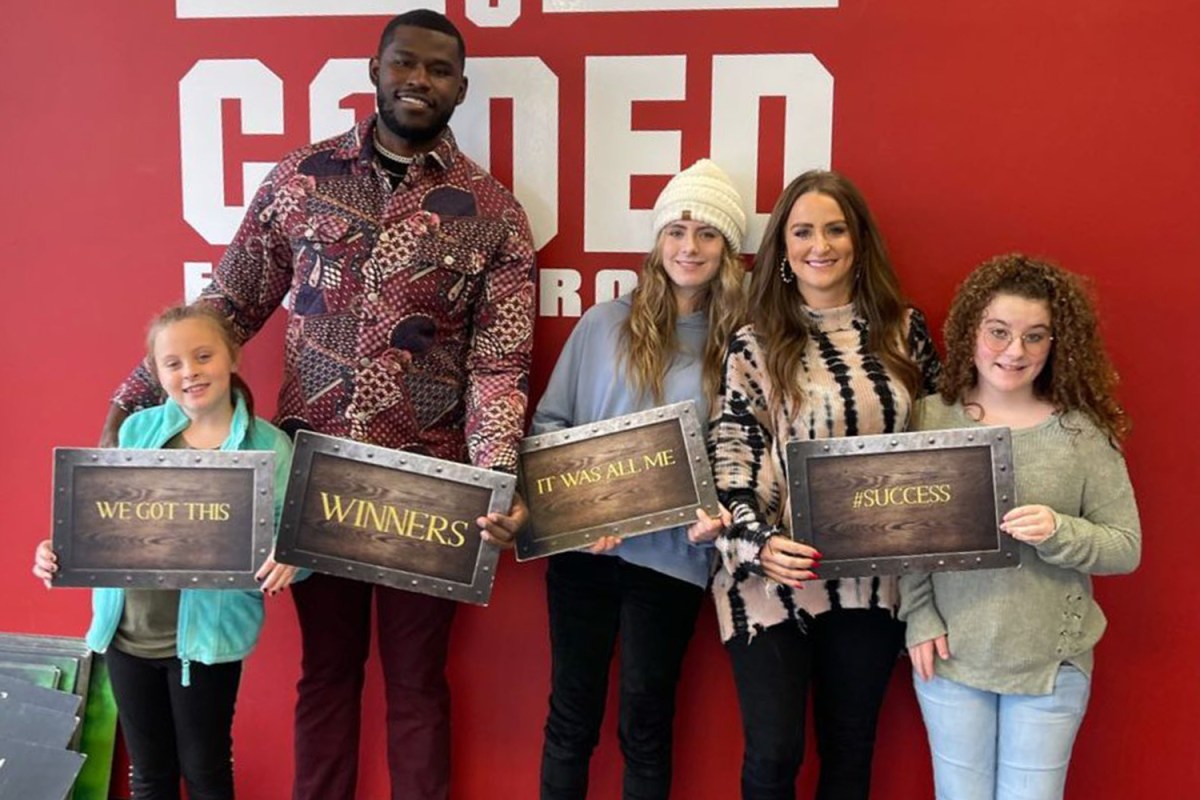 Although the clip was meant to spotlight the girls, the MTV star, 29, stole the show.

The video, posted to Leah’s Instagram Story, was set to a song featuring the lyrics: “You are my everything.”

Leah appeared to be filming in the car, with Jaylan sitting in the driver’s seat.

The Teen Mom 2 star wore a brown shirt with a cut-out on the front, red earrings, and her hair in curls.

She panned the camera first to the girls, each sitting in the back of the car, and then to Jaylan, who made a one and a two with his fingers.

The girls are celebrating their 12th birthday.

In the second of two clips shot in the car, Leah added an animation that read: “Happy, Happier, Happiest Birthday.”

After the videos, the mom of three posted a photo of herself, Jaylan, and her daughters at a place called Locked & Coded.

The blended family appeared to be holding signs, one of which read: “Winners.”

She later shared a photo of the group sat around a table at what appeared to be her daughters’ birthday dinner.

Leah has been gushing about her daughters in the days leading up to their birthday.

Earlier this week she shared adorable throwbacks of Ali and Aleeah in celebration of the big day.

In one photo, Leah smiled as she held each daughter in one arm, while the girls donned matching pink life jackets and flower-covered swimsuits.

She also included a more recent selfie of herself and her daughters, as well as a pic of herself holding baby Aleeah.

Leah shared even more photos of the girls as babies, as well as some snaps taken more recently that showed how much they’ve grown.

She wished them a happy birthday in the caption, which read: “Happy 12th Birthday to the two that made me a Mommy.

“It sure has been a journey & I wouldn’t change it for the world. Ilysm.”

Several fans flocked to the comments to send well wishes their way.

In the past, fans have compared Leah to her twin daughters, specifically Aleeah.

THREE OF A KIND

Earlier this month, Teen Mom 2 viewers claimed that Aleeah is Leah’s “actual twin” after she posted a selfie with her daughter.

The reality star appeared glammed up in the photo, which she posted to her Instagram Story.

She wore a fancy brown outfit in the photo, while Aleeah wore all white.

A poll was included in the post, in which Leah asked fans if the duo looked like “twins.”

Most respondents said yes, noting quite a resemblance.