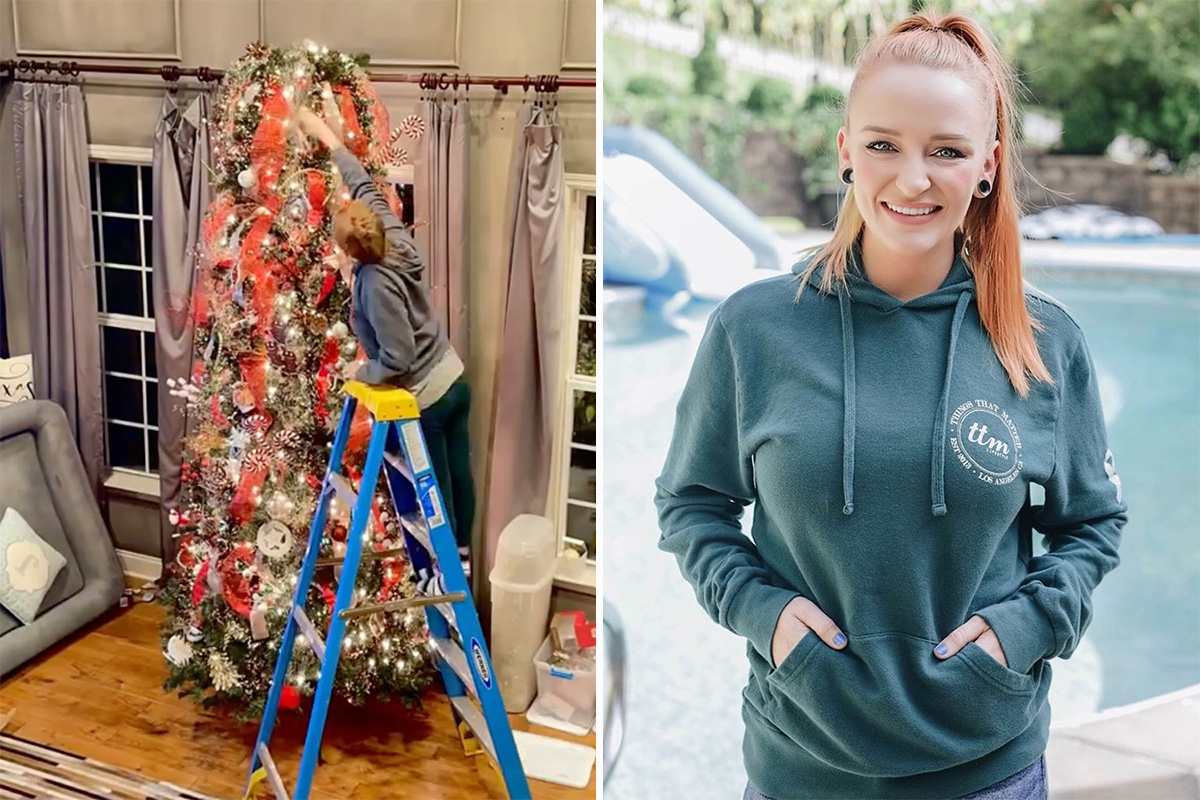 TEEN Mom Maci Bookout shared a sweet holiday video of her dramatic Christmas decorations, which took place inside of her $625K Tennessee mansion.

Maci, 30, was in a festive mood as she decorated her tall Christmas tree indoors.

In the Instagram video, the Teen Mom OG moved her ladder around as she decorated the twelve-foot tree with lights and other decorations.

The MTV star pulled her long hair into a bow and had on a grungy outfit while putting up the ornaments.

Maci had taken up to nine hours in order to add the “lights with full decorations.”

She also took “short breaks for motherhood and meals.”

The reality star also asked her husband, Taylor McKinney, 32, “what caption would fit this video.”

Maci jokingly wrote: “He spit out some Ludacris lyrics for real.”

Back in June, The Sun exclusively revealed that Maci and Taylor had bought about 48 acres of land in Cleveland, Tennessee.

According to real estate sites, the property was described as a “serene country setting that offers just the right amount of privacy while still being convenient to town.

“This country retreat offers plenty of wildlife and lots of privacy.”

The websites urged interested buyers to “build their dream home” on the land.

Built back in 2007, the mansion featured cathedral ceilings, about two stories of windows, a fireplace, a four-car garage, and more.

The kitchen, which Maci used for filming during her Teen Mom show, featured granite countertops and stainless steel sink and appliances.

The stairs and fireplace have been stacked with stones, while the backyard came with a massive in-ground pool.

Maci and Taylor sold their previous home and accepted an offer on the current abode, which became a storyline on the MTV show.

Recently, a preview of Maci yelling at her husband Taylor was released.

In the teaser clip, Taylor called Maci’s friend to ask if she could pick up their daughter Jayde from school because he had to go pick up Bentley, and his wife was sick.

Maci was unhappy with her hubby “making decisions about the kids” without her.

She said: “The other day when I was sick of whatever, Ashley called me and was like, ‘Taylor called yesterday’ and then you asked her to pick Jayde up from school because I was sick.

“I get what you were trying to do, but there’s a layer to this that I would prefer it not happen again.”

When Taylor asked how he could have handled the situation differently, Maci replied “Next time when you have something to do, especially with our kids, either don’t do it or run it by me first.”