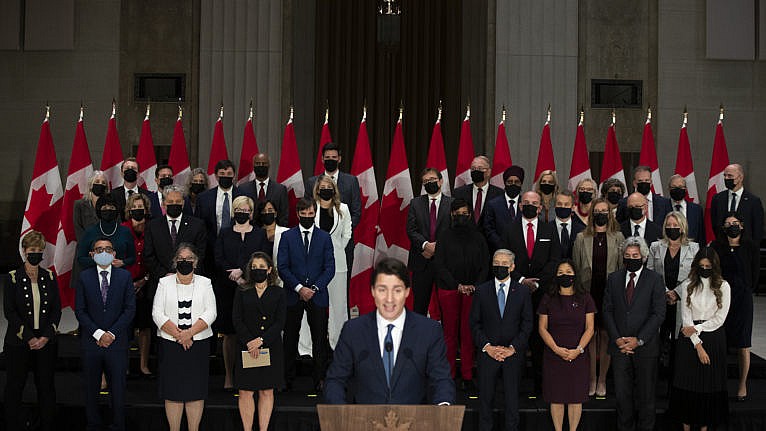 Paul Wells: The government has named two cabinet committees with identical mandates, in a system sure to collapse under the weight of its own absurdity

What’s the most important thing your workplace does? Maybe you work at a restaurant, so making food is a key to success. Maybe you’re in journalism, so you need to sell advertising. If you’re in trucking, logistics—keeping track of freight, fuel and carriers—might be what keeps you up at night.

Have you ever considered splitting your central operation—the one thing that will make your organization succeed or fail—in two?

Instead of one kitchen, have two, with same-sized staffs and identical mandates. Orders for steak frites will sometimes go to one kitchen, sometimes to another. Instead of one ad department, have two teams of equal size calling the same clients (or different ones! Who knows?) and pitching ad sales to them. As for trucking, why not have two offices lining up supplies, tracking shipments and assigning work shifts?

Perhaps you are saying, “No, Paul, I have never considered doing this because it would be a recipe for chaos. Some customers at my hypothetical restaurant would get two steaks. Some would get none. Rivalries between the staffs at the two kitchens or ad departments or logistics hubs would be inevitable. Effort would be wastefully duplicated, or would need to be painstakingly coordinated. It might make sense to have a savoury kitchen and a dessert kitchen, but two full-service kitchens running at the same time? That’s just weird.”

MORE BY WELLS: The future of the Liberal Party—without Justin Trudeau

I tend to agree. Which is why I was struck by the latest list of cabinet committees released on Friday by the federal government. Cabinet committees are often the first point of entry for big government decisions to get looked at by a group of cabinet ministers, instead of just the minister directly responsible. Committees consider plans, draft bills, important decisions before they get kicked upstairs to the full cabinet. It’s important work.

The latest list is mostly committees we’ve seen before. “Agenda, Results and Communications” is roughly the Priorities and Planning Committee that played a coordinating role in earlier governments. “Operations” also has many antecedents. “Treasury Board,” “Canada and the World,” and several others are self-explanatory.

These are the two largest committees on the list, each with 14 members. They have very broad mandates: integrating economic and climate concerns is the Holy Grail of modern governance, but it’s no walk in the park. Adding “inclusion” to the mandate hardly simplifies things.

But having decided to integrate all of those themes in one cabinet committee, why then decide to have two committees?

Perhaps their mandates are different. But that’s not what it says in the release. Committee “A,” it says here, “considers such issues as sustainable and inclusive social and economic development, post-pandemic recovery, decarbonization, and the environment as well as improving the health and quality of life of Canadians.” Committee “B” is to do the same things. In the same words. In the same order.

By now perhaps you are saying, “Look, Paul, just ask the government.” I’m way ahead of you. On Friday I wrote to the Prime Minister’s Office:

“Can anyone explain to me why there are now two cabinet committees on climate, with identical mandates? Will they split up their work, or duplicate it in parallel, with a goal of arriving at better policy? Why is climate the only topic that gets two committees, unlike ‘results’ or ‘the world’?”

My source there sent me the original news release that had inspired these questions. Then, on background so I can’t quote them—which is fine, because these answers never come from a single person, but from a collective process—they sent this fuller response:

“This structural change will produce results for Canadians by accelerating the delivery of our platform pledges. As we finish the fight against COVID-19 and build a resilient recovery, the two committees will be able to work on policies to ensure they promote economic growth that works for Canadians and builds a cleaner and greener future.”

Perhaps this answer is informative to you. I can’t say the same. To me it’s a laughable dog-ate-my-homework answer. It does nothing to answer why there are two committees. It doesn’t say whether each will tackle the same work—the way Ben Bradlee sometimes used to assign the same story to two young reporters at the Washington Post, knowing each would work their tail off to beat the other—or whether some draft bills will go through committee A, and some through committee B.

Surely it’s the latter. If both committees consider Draft Bill X, that’s not a time-saving exercise, it’s a massively redundant time-wasting exercise. But neither is the government much ahead if the two committees get distinct workloads. Think it through: if Committee A considers Draft Bill X, and then B gets handed Draft Bill Y whose proper consideration depends on a bit of context from Draft Bill X, then B isn’t well-placed to understand this new bill. It’s like splitting your book club in half and giving only the odd-numbered chapters of each new book to New Book Club A and the even-numbered chapters to New Book Club B. This probably sounds like an efficient way to get through books, if you’ve never read a book.

It’s also worth noting that Jonathan Wilkinson, the former environment minister now assigned to natural resources, is on committee A, while Steven Guilbeault, the new environment minister, is on B. Natural resources and environment have long histories of not getting along. Of course this government believes it has solved this problem the same way it solved the problems involved in planning prime ministerial travel: by hoping for the best. Tossing each minister half a pool cue may not, in the long term, prove helpful.

In the end I doubt this will be a huge problem because I expect this system to collapse under the weight of its own absurdity. It’s such a dumb way to organize a government that it’s hard to imagine it lasting past Easter. The two committees with identical mandates will become one bigger committee, or two committees with explicitly distinct areas of concentration. The Trudeau cabinet had a “Canada In the World and Public Security” committee for years. Now it has a “Canada and the World” committee and a “Safety, Security and Emergencies” committee. This change would have come even sooner if there had been two world-and-security committees eyeing each other warily from the outset.

I burden you with all this for a couple of reasons. The first is that after six years in power and one of the most leisurely post-election transitions in the last 20 years, this government is still capable of coming up with head-scratchingly bad ideas.

The other is that while it was good fun giving me a terrible answer to some basic questions, they were also not giving you, dear reader, a better answer. And I’m pretty sure it’s because none of them has done the thinking that answering the question would have required.