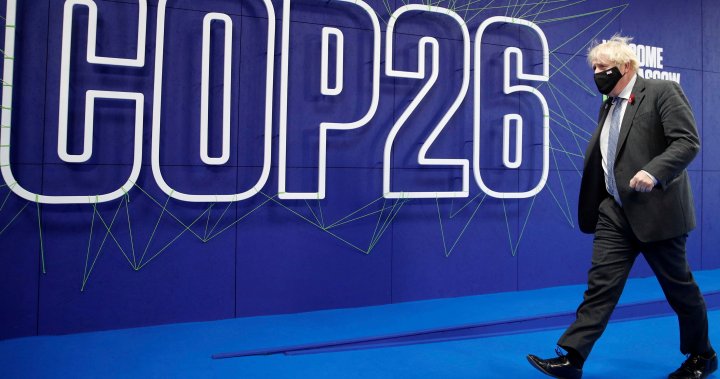 The British hosts of the COP26 UN climate conference laid out their draft deal for tackling climate change on Wednesday, and while environmentalists and researchers say the proposal has some good ideas, it still falls far short of what needs to be done to prevent catastrophic warming.

“If we think we’re going to come away from this process with the problem solved, we’re not,” said Mark Jaccard, a distinguished professor at Simon Fraser University and author of multiple Intergovernmental Panel on Climate Change reports.

The draft document tells countries they’ll have to make sure global greenhouse gas emissions drop 45 per cent by 2030 from 2010 levels — and halt their rise altogether by 2050 — if they want to stop the world from heating beyond the 1.5 C threshold.

The Brits also took aim at the fossil fuel industry in their draft, urging countries to ditch coal and phase out fossil fuel subsidies. But they pitched this push without a timeline attached to it.

All this adds up to a draft that climate experts say falls short — and that’s even if it isn’t softened during negotiations in the coming days.

There was one small victory in the draft text, according to Julia Levin, the senior climate and energy program manager for Environmental Defence.

“The victory is that, for the first time, the decision text includes the need to phase out coal and fossil fuel subsidies,” Levin said.

But even that has its downside. While the language is indeed included in the draft, it isn’t accompanied by any kind of timeline, for now. That makes it difficult to hold any countries accountable for failing to phase out those fossil fuels, according to Levin.

“We need timelines attached to those commitments,” she said.

Overall, Levin said the draft commitments that the British hosts of COP26 presented show that “leaders are failing us.”

“The promise the countries made when they signed the Paris Agreement agreement (was) to limit global warming to 1.5 C,” Levin said.

“We know that’s the threshold for avoiding catastrophic climate change and irreversible impacts.”

But, she said, “there’s a huge gap in terms of where we need to be by 2030 and where countries have committed to being.”

The Climate Action Tracker (CAT) research group said on Tuesday that all the national pledges submitted so far to cut greenhouse gases by 2030 would, if fulfilled, allow the Earth’s temperature to rise 2.4 C from pre-industrial levels by 2100 – a significant but small step from the current 2.7 C trajectory.

But that small step blows far past the Paris Agreement’s goal of just 1.5 C of warming.

Read more:
Climate change might be spiraling out of control. What does that mean for Canada?

“It is urgent to stop the current rate of emission rises and … to give us ourselves a mandate to come back with stronger urgency when it comes to the implementation of the Paris Agreement,” said Eddy Pérez, the international climate diplomacy manager with the Climate Action Network.

“We know that every degree extra, every tonne extra that we put in the atmosphere has very devastating impacts on people and communities globally.”

Levin said she’s “angry” about the path the world is on — even with the new draft document.

“We’re going to get more and more natural disasters hitting every part of the planet: flooding, fires,” she said.

“More and more people are dying because of heat waves … sea-level-rise wiping out countries.”

An agreement without action?

A key issue with the document is the lack of firm policies to ensure countries keep the promises they make at COP26, according to Jaccard.

“The challenge with commitments … is that there’s no way for the international community to make sure a country sticks to its commitment,” he said.

“The commitments don’t matter so much as the policies required to achieve them.”

There are a variety of ways countries can pressure or encourage one another to comply with the promises that will emerge from COP26, Jaccard added.

One option is carbon tariffs, which put a price on imports from countries that aren’t acting to reduce their emissions.

But, he added, “countries don’t seem ready to do that yet.”

“I’m frustrated with that,” Jaccard said.

One way to turn promises into real action is if wealthier countries finance the climate goals for poorer countries. And unlike carbon tariffs, financing has played a significant role in the ongoing discussions at COP26.

Cutting emissions can require expensive investments and costly pivots away from emissions-heavy industries like coal and oil, according to Levin.

“Countries like Canada, who … have been historically big emitters, are responsible for driving, fueling the climate crisis,” said Levin.

“At the same time, we have developing countries — the countries least responsible for the climate crisis — who are facing the brunt of the impacts.”

In recognition of that, developed countries pledged to jointly mobilize US$100 billion per year by 2020 in order to help developing countries mitigate the impacts of climate change and adapt towards a greener future.

However, the developed countries have yet to actually deliver on this pledge.

But without making these kinds of changes to the draft text before it becomes finalized, the COP26 commitments will be “a disappointment.”

Unfortunately, Jaccard warned, these negotiations can tend to soften the draft instead of bolstering it.

“There’s like a lowest common denominator, the countries that are least willing to do something, they require you to water down what that agreement is,” he said.

For example, some oil-producing nations will likely fight tooth and nail to convince participating countries to drop the mention of phasing out fossil fuels from the final agreement, Levin said.

“There are over 500 fossil fuel lobbyists at COP. That’s larger than any single national delegation. So the fossil fuel industry is more represented than any country,” she said, citing an analysis of the UN’s provisional list of attendees from an environmental campaign group Global Witness.

Perez, who joined Global News from the COP26 conference in Glasgow, said there are “different interests” in the UN space.

“So my optimism lies with those that know that keeping 1.5 within reach is our safest option to protect each other from future harm.”

Perez said he hopes that the participating countries will listen to the young people protesting outside rather than the legions of fossil fuel lobbyists within the conference’s walls.

“This is an opportunity to get countries to be much more responsible for their climate pledges, and we need to make sure that they hear what is happening outside, what kids in the streets are saying,” he said.

“Their voices need to influence the final outcome here.”

Canada, meanwhile, is pushing to ensure that beefed-up climate targets are a part of the final document.

“The draft agreement calls on countries who have not yet increased their climate targets under the Paris Agreement to do so by the next COP. It is Canada’s hope that this will be included in the final agreement,” said Joanna Sivasankaran, a spokesperson for Environment Minister Steven Guilbeault, in an emailed statement.

“Canada supports an ambitious agreement that will help keep the goal of 1.5 degrees within reach. Negotiations to this end are currently underway and Minister Guilbeault is playing an active role.”

In the end, whatever does emerge from the conference will not be legally binding — but it will have the political heft of the 200 participating countries behind it.

— With files from Reuters and The Canadian Press