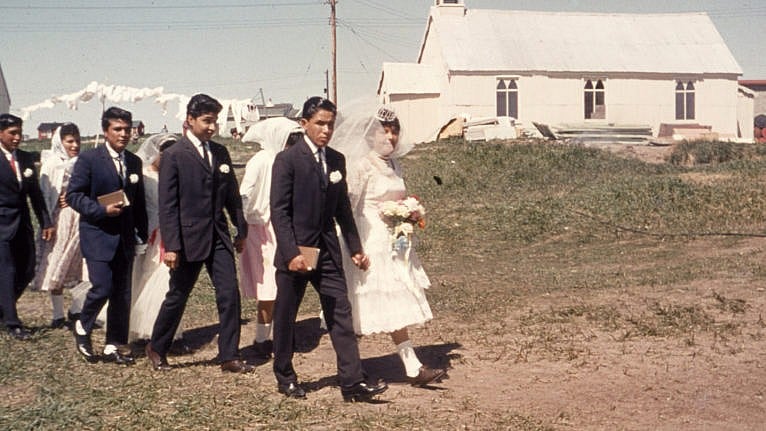 Kuujjuarapik in Nunavik, Quebec, is giving its local church—a symbol of the colonial project—a new afterlife by turning it into an interpretive centre to showcase local artifacts

When she was a girl growing up in the place settlers had called Great Whale River, Rhoda Kokiapik remembers taking a school trip to the town’s old Anglican church, a structure made of corrugated iron that was full of treasures. She recalls looking overhead and seeing a qajaq, the Inuktitut word for kayak, attached to the ceiling. Anglican church services were no longer held there—a newer church had been built—but the kayak and other artifacts remained in the structure, objects that told stories about the community’s past ways of life.

“It was packed, and you could feel it was alive. It was not just a place with stuff. It was rich,” she recalls. “People used this qajaq to hunt. The mystery part is, was it my grandfather or my friend’s grandfather who owned it?”

With a view to imparting the same sense of wonder and history to the next generation, the municipal government of Kuujjuarapik, now recognized by its traditional Inuktitut name, is working to restore the church and create an interpretation centre to showcase local artifacts. To do so, it has secured funding from other levels of government and partnered with Avataq Cultural Institute, a non-profit organization working to preserve Inuit culture in the Nunavik region of Quebec. The interpretive centre would serve some 400 Inuit people along with 300 non-Inuit people who live in Kuujjuarapik, as well as another 1,000 people who live in the neighbouring Cree community, Whapmagoostui.

RELATED: I ran away from the Kamloops residential school. This is where I hid.

It’s an unexpected afterlife for a symbol of the missionary and colonial project—and a reminder of the complex relationship many Indigenous peoples have with that past.

The “iron church,” as it became locally known, was a prefabricated, corrugated iron structure shipped from Britain and originally built in 1879 at Qilalugarsiuvik (then known as Little Whale River), according to Susan Lofthouse, an archaeologist with Avataq. That was the posting of Rev. Edmund Peck—known as the “Apostle of the Inuit”—who would teach Inuktitut syllabics to local people so they could read translated Anglican texts. In 1895, the building was moved by sled and raft about 100 km southwest along the coast of Hudson’s Bay to Kuujjuarapik, at the mouth of Great Whale River.

The church went up near the local Hudson’s Bay Company trading post, which first opened in 1813, operated on and off until 1878 and stayed open until the mid-20th century. The post facilitated the company’s beluga whale hunt and became a regular stop for families commuting by dog team to trade furs and other goods. The site of its main buildings is now covered with vegetation and sand from the riverbank, says Lofthouse. But a recent fluke discovery could open the door to uncovering more of its history.

MORE: Where to donate to support survivors of residential schools

This summer, as strong winds blew over a construction site being dug up for a parking lot, workers uncovered a whaling harpoon head. The object made its way into the hands of Mayor Anthony Ittoshat, who put it away for safekeeping and cordoned off the area so that archaeologists from Avataq could pay what Lofthouse described as an “emergency visit” to the site. It will stay untouched, Ittoshat says, until teams can return, likely next year, to do a more thorough excavation. (Due to pandemic delays, that’s when the church project is likely to go ahead, too.)

Lofthouse figures that if teams dig down further, or look closer to the river where other buildings stood, they’ll find older evidence of the trading post. The harpoon head, as well as other finds such as clay pipe fragments and metal spikes, date from the early to mid-20th century, she notes, adding: “It’s a matter of figuring out timing, resources and funding. But we hope to do more investigations next year.”

At a time when Indigenous peoples across the country are reckoning with their colonial past, and as many reconcile Christian beliefs with the knowledge that most residential schools were administered by Christian institutions, you’d think there would be a temptation to leave evidence of the Hudson’s Bay Company in the sand. Or to dismantle and remove the old church, rather than renovating it.

“Even the church itself, Christianity, is a colonial introduction,” says Kokiapik, who grew up in the community and now works as executive director of Avataq at its Inukjuak office. “So everything about this project—the old church and the materials in it and also the trading itself—these are part of a history that was unfortunately initiated by the colonial movement.”

But she is keenly interested in that history. Exploring and questioning it, she says, can be part of the “decolonization” that she and many other Inuit are trying to work through. She looks forward to joining her archaeologists when they revisit the prospective parking lot.

Mayor Ittoshat says the project has been “bittersweet.” Reckoning with the village’s past has forced members of his community to ask themselves what their roots are, what their religion is. “Knowing today that there’s like 100 types of religions, Buddhism, Islam, Christianity, where do we fit in as Inuit people? Just because [the Anglicans] got to us first, doesn’t mean they’re right,” he muses.

Coming to grips with the ways that Inuit and Cree people in the area were ravaged by disease and co-opted into commerce and Christianity can bring hurt, anger and anxiety, Ittoshat says. But he remembers standing inside that old church, back when it was in better condition, and feeling a sense of peace. A sense of calm. “You hold the history of all the people who came here to do religious things. It all comes to you,” he says. “We wanted to preserve that kind of feeling.”

This article appears in print in the November 2021 issue of Maclean’s magazine with the headline, “Symbols of a troubled past worth saving.” Subscribe to the monthly print magazine here.