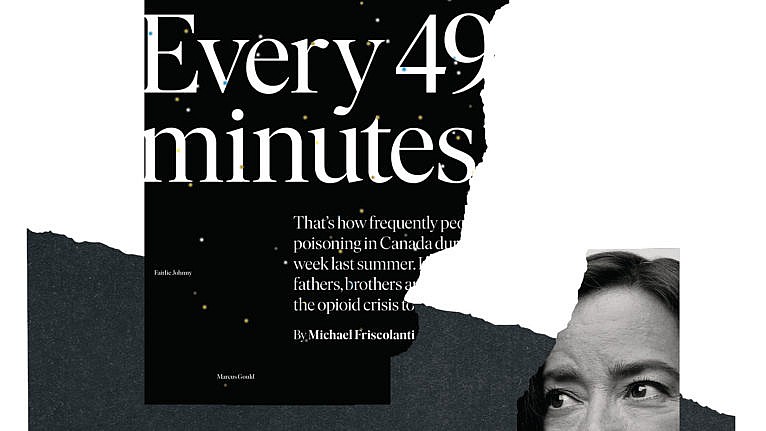 Thanks to Michael Friscolanti for his outstanding exposé on drug-poisoning deaths in Canada (“Every 49 minutes,” September 2021). This article should outrage every North American. As Friscolanti rightly notes, we know what to do: “Decriminalization for personal use. Increased funding for proven harm-reduction measures. Safe supply—a legal, regulated alternative to the crime syndicate poison that’s killing so many.” Infuriatingly, the Canadian federal campaign failed to focus on putting these practical plans into action. The safe consumption site in Lethbridge, Alta., a city I had the good fortune to visit as a volunteer for a Liberal candidate in the 2019 election, has since closed, a tragedy that Friscolanti fails to juxtapose with the fact that Lethbridge in 2020 “endured the highest rate of fatal overdoses” in Alberta. The lamentable reversal in Lethbridge notwithstanding, Canada has far outpaced the United States in establishing safe consumption sites. Friscolanti’s poignant portrayal of Canadian lives lost should serve as a call to action for all of us to do more to prevent the needless deaths of our family members, friends and neighbours.

Your story on drug poisoning resonates with me. Our son took his life two weeks ago because he couldn’t get off drugs. He was 33, super intelligent, super musical, super athletic, having won the gold medal in triathlon at the 2000 Alberta Summer Games in Grande Prairie. He was funny, caring, loving and kind. But he also had ADHD, and cocaine and fentanyl took him. There is not enough being done to save our children. Thanks for the article.

First of all, thanks to Maclean’s and to Michael Friscolanti for the article. And maybe it won’t sound bitter when I say, it’s about time. This is as close as we may ever come to something equivalent to the “They Were Loved” pages that Maclean’s has published about COVID deaths. Second, thanks to Joe Cressy of the Toronto Board of Health, who said, “The overdose crisis is an epidemic, and the only distinction when you compare it to COVID-19 is that governments don’t tackle it with the same urgency . . . because it’s drug use, and because of the stigma associated with drug use, people continue to die needlessly.” The last time I checked, there was not a single medical school in Ontario that required study of substance misuse—prevention, harm reduction, not even treatment—as a core course.

Stephen Maher wrote about one Iranian’s dangerous and desperate struggle to reach Canada as a refugee.

Why was information presented by some people interviewed for this piece included without much context (“Escape from Iran,” September 2021)? Mahnaz Alizadeh says large numbers of Iranians enter Canada as students and then falsely claim asylum. But is this true? In fact, a large number of Iranians do come to Canada as students but then are entitled to apply for permanent residency. Professor Christian Leuprecht says the system can no longer distinguish between genuine and less-than-genuine refugees. That’s a pretty striking statement—but there is no explanation for it. The piece says Canada removed “only 9,500 migrants in 2018-19.” Why is the word “only” included? How many should have been removed? How many are normally removed? The Canada Border Agency is quoted as saying it did not remove the majority of individuals who were subject to removal orders “to maintain public safety.” How is keeping failed refugee applicants in Canada good for public safety? The article points to the Canada-U.S. Safe Third Country Agreement, yet it has no bearing in Alizadeh’s case, as landing in the U.S. first was never her plan. Finally, and arguably, casting a negative light on human smugglers is a relatively easy thing to do. They profit off the vulnerable. However, a future article might explore how hundreds of thousands of now-Canadians owe their lives and their new-found freedoms in Canada to human smugglers.

In October, Joanna Long told the story of her experience with embryo donation.

Your October 2021 cover is wrong, wrong, wrong (“All (y)our children,” October 2021). It is a blatant attempt to grab eyes at the newsstand and does not accurately reflect the story within the magazine. Embryos are not babies. It is a story of privilege, particularly white privilege, as infertility treatments are very costly. A much better story would have been the examination of the growing incidence of infertility. The magazine would have been even better if you had put the story “The working class has had enough” on the cover. The issues discussed in that story affect many more people.

I’m reading the October 2021 issue and am so curious as to why you buried the lede. I would have thought the cover would be your interview with Jody Wilson-Raybould, much the same as your July 2021 cover showcased Rosalie Abella. In 2020, the infamous former American president was featured on your cover. Here we have a candid feature, aligned with her memoir, about a female leader who acted with integrity, yet your cover shows an anonymous white baby. Not just disappointing—I believe there was a missed opportunity here to highlight a perspective that our country desperately needs. You have a well-respected platform to offer this. Let’s see more diversity in your choice of cover photography, please.

In October, Prajakta Dhopade wrote about what it will take to rename Toronto’s Dundas Street.

The decision to rename Dundas Street is part of Toronto’s efforts to achieve truth and reconciliation with Black and Indigenous peoples (“Revitalizing the road,” October 2021). The trouble is, the city skipped over the truth part. Here’s what is true. Henry Dundas represented a slave fighting for his freedom and won a declaration from Scotland’s highest court that no person could be a slave on Scottish soil. In 1792, a motion for immediate abolition of the slave trade was facing certain defeat until Dundas intervened and proposed an amendment to achieve abolition “gradually.” His amendment won over the moderates and made it possible for Parliament to endorse abolition for the first time in its history. In the 1820s, abolitionists had made no progress towards abolition of slavery and regretted their rejection of Dundas’s plan. The truth is, the activists got their facts wrong, and Toronto picked the wrong guy.

Your new look is a win-win-win (Maclean’s, September 2021). It is much easier to read; I particularly like the two-column format and the varying page layouts. The September issue was the best issue ever and I have been a reader for more than 60 years.

I picked up the September issue for my fishing/canoe trip into Algonquin Park. Please tell Paul Wells that I did pull out pages from his Justin Trudeau piece to wrap a lake trout in, but not with any hostile feeling toward the printed word therein. On the new design: the hairline rules look good but the heavy rules break the flow of the eye and make the publication look like a 1960s tabloid. The “Endnotes” outtakes on the last page are confusing. But, all told, your magazine will now be on my canoe-trip packing list.

Maclean’s marked the 20th anniversary of 9/11 with a portrait series about people affected by the attack.

I don’t know if I’ll ever be able to grasp the enormity of that day. As a Grade 8 student in 2001, at lunch on 9/11, my teacher said to me: ‘It will be your Pearl Harbor.’ She was right in so many ways. To all impacted, may you find peace—and may we all work for it.

A place to call home

In September 2021, Melanie Green told the story of an RV park in Tofino, B.C. that was being shut down.

RVs­—the original “tiny home”—are becoming more popular and increasingly necessary for people who can’t afford to buy or rent. With good management, RV parks can be a great place to live.

This issue is not specific to Tofino. Smaller “vacation” communities like Collingwood, Ont., also have a massive shortage of affordable housing for all the staff required to run resorts and restaurants.

We welcome readers to submit letters to letters@macleans.ca. Please supply your name, address and daytime telephone number. Letters should be fewer than 200 words, and may be edited for space, style and clarity.